If you watched only the first quarter of the Dallas Cowboys’ Week 5 win over the New York Giants, you might assume the game was a weird, sloppy, NFC East slugfest typical of the 2020 season that saw a 7-9 team win the division. The Cowboys led 3-0 after 15 minutes and had already turned the ball over twice. The Giants had mustered 16 yards of total offense and already lost running back Saquon Barkley to an ankle injury.

But that was not a sign of how the rest of the afternoon would unfold.

Dallas turned it on for the rest of the game, scoring points on six of their final seven drives and adding a defensive touchdown in the waning moments just for fun. And that offensive turnaround brings us to the key number that defined Week 5: 515.

That’s the number of total yards gained by the Cowboys on a day when they bungled much of the entire first quarter. They became the fourth team this season to gain at least 500 yards of offense in a single game. The first to reach the 500-yard plateau was the Tennessee Titans in Week 2. The other two were the Tampa Bay Buccaneers and the Cleveland Browns, both of which reached the mark this week just a hair before the Cowboys.

The Bucs accumulated their 500 in typical Tom Brady fashion, with Brady throwing for more than 400 yards in a win over the Dolphins. The Cowboys, Browns, and Titans, however, joined a more exclusive club in their victories. They did it through balance. 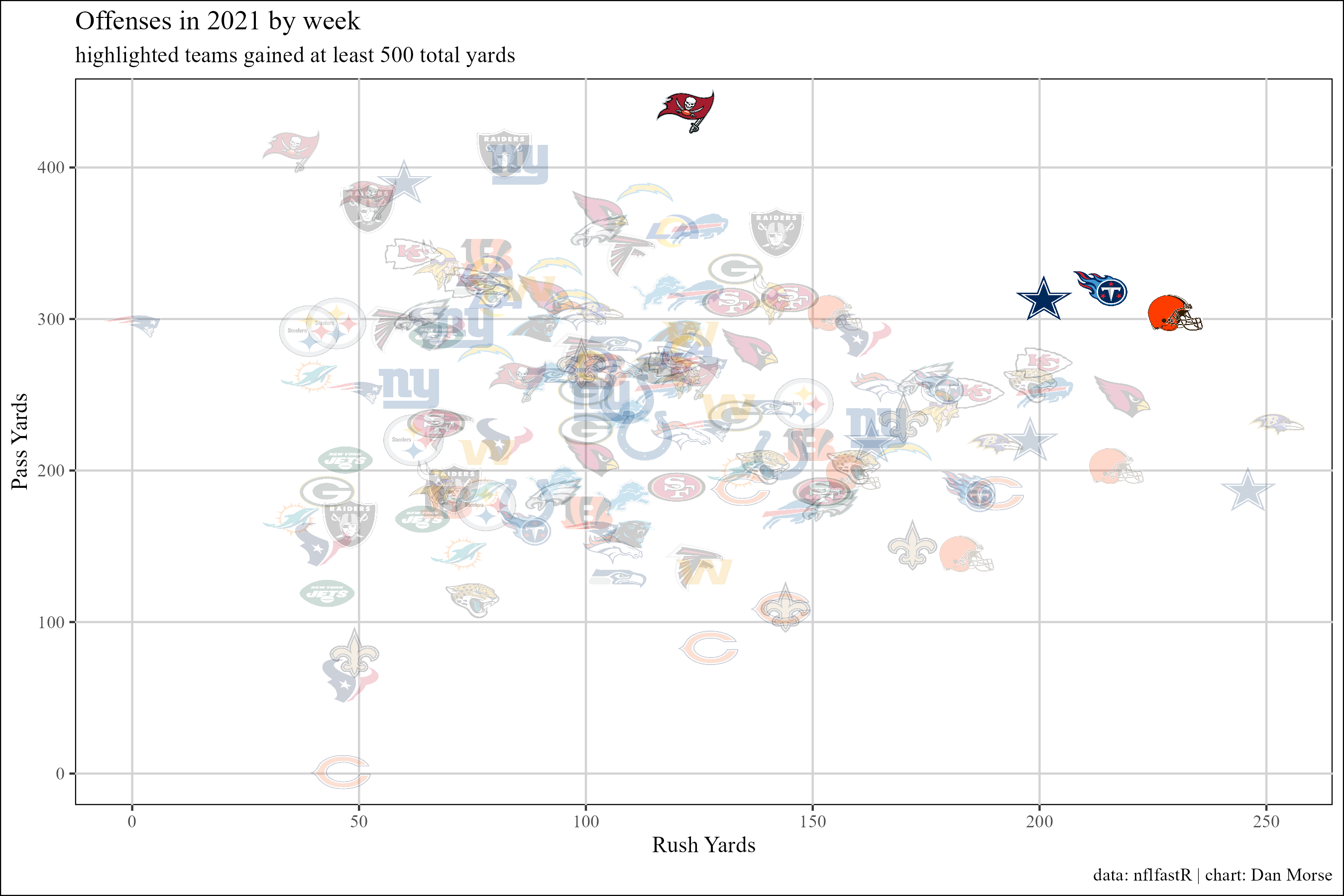 Since the AFL-NFL merger in 1970, there have only been 66 occurrences of an offense gaining 300-plus yards through the air and 200-plus yards on the ground in the same game, including the three offenses mentioned above. The last time the Dallas Cowboys managed this feat was way back in 1983. That’s right: “The Triplets” of Troy Aikman, Emmitt Smith, and Michael Irvin never once accomplished this in a single game.

In a way, the Week 5 Cowboys game was a microcosm of the Kellen Moore offense in 2021: versatile.

The Cowboys offense takes what the defense gives. After attempting a whopping 58 passes in Week 1, the Cowboys’ offense didn’t break 30 pass attempts until this last game, when Dak Prescott threw it 32 times. The Cowboys’ 136 rushing attempts this season are the third-most in the NFL behind the Cleveland Browns and the Tennessee Titans. However, while the Titans face at least eight defenders in the box on over 40 percent of their carries, the Cowboys see that many in the box on only 21 percent of theirs (per Next Gen Stats). Teams appear to be defending the Dallas passing attack and daring them to run, to which Kellen Moore has said: fine, sounds good to me.

Next Gen Stats also tracks what’s called expected rushing yards. Based on things like the location of the nearest defenders and the blockers in front of the rusher, they predict how many yards each carry will gain. Dallas has the third-highest expected rushing yards in the NFL so far this year, behind the aforementioned Browns and Titans. But as mentioned above, Dallas faces far fewer loaded boxes than those other two, and their expected yards per carry shows that. 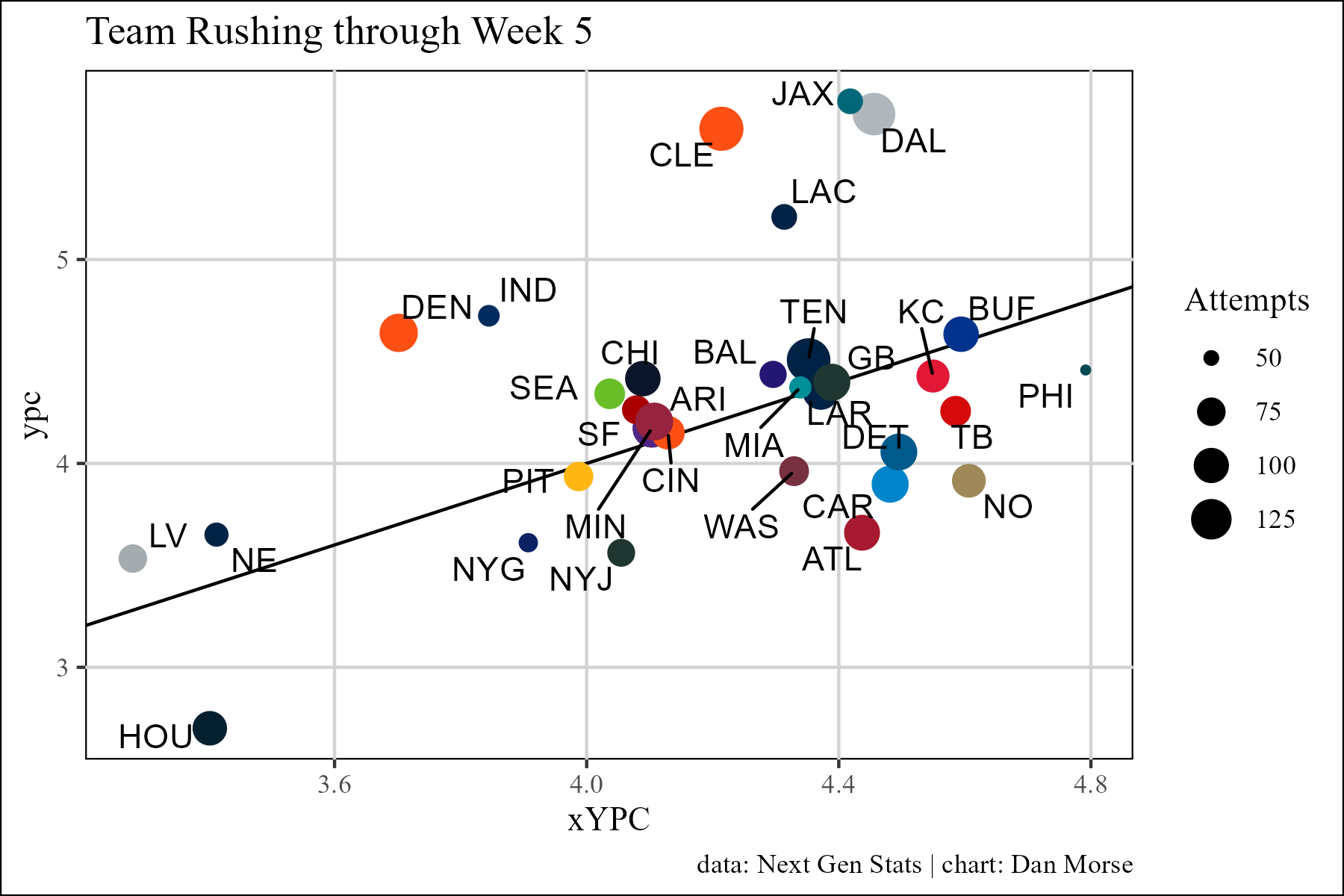 Dallas has the eighth-highest expected yards per carry in the league paired with the third-highest total rushing attempts. Usually, when a team runs that often, their opponents tend to load up to stop them and fill up the running lanes. But that hasn’t happened yet with this team.

Instead, teams continue to focus on slowing down the passing attack, led by Dak Prescott, CeeDee Lamb, and Amari Cooper. Prescott has been remarkably efficient thus far this season. He’s currently completing 73.9 percent of his passes, good for second in the NFL behind Arizona’s Kyler Murray. And, similar to how the rushing attack simply takes what the opponent is giving up, Prescott hasn’t forced throws downfield when there’s nothing there. His average depth of target is down to 7.4 yards, eighth-lowest in the NFL and a career-low for Prescott. Even with the low target depth, however, he’s still picking up first downs through the air on nearly 40 percent of his passes, higher than each of his first three seasons and tied with his shortened 2020 campaign.

A passing attack that was thought to be all about a three-headed monster of wide receivers has missed Michael Gallup for much of the season, but that hasn’t changed its ability to diversify. Right now, there are three players leading the team in three receiving categories:

There’s simply too much ground to cover when it comes to trying to slow down this Dallas offense, and they proved that quite well in Sunday’s win. Netting over 500 yards, especially in a game that started off so choppy and unlucky, is an impressive feat. Doing it with this kind of balance is a rare one. The main takeaway is that this offense is deadly in any given quarter, on any given Sunday, making the sky the limit for how far this team can go in 2021.

The event is virtual and free this year.
By Will Maddox
Football