A normal NBA offseason runs anywhere from three to five months, depending on how deep a given player’s team goes into the postseason. Luka Doncic’s was three weeks.

Actually, “offseason” is not the best word to describe what Doncic did this summer. “In-between season” is probably a better way to put it, because those three weeks of rest amounted to a stint of a few days, one that quickly got lost in the shuffle of training and highly competitive international basketball.

On June 6, the Mavericks lost Game 7 of their first-round playoff series with the Los Angeles Clippers. After that, Doncic was part of two training camps with the Slovenian national team, with whom he played 10 win-or-die games in the qualification and the main Olympics basketball tournaments. On top of that, Doncic completed his own individual three-week training cycle to prepare for the upcoming NBA season.

Which explains his wry smile this week at Mavericks media day when he was asked whether he’d gotten enough downtime to be fresh for training camp. “Obviously, I didn’t get enough,” he said. He added that he regrets nothing. “Always, when I’ll have the opportunity to play for my country, I’ll play. It’s something that you do with your heart.”

The man who helped Doncic stay in shape throughout what was the most grueling summer of his career is Anze Macek, a former basketball player and co-founder of Slovenia’s 2A Sports Lab, a strength and conditioning company for professional athletes that primarily focuses on basketball players. The 30-year-old has been training athletes since 2014, but his big break came five years ago, when he began working with the Slovenian Basketball Association. He built a “special bond and friendship” with then Miami Heat and current Toronto Raptors guard Goran Dragic, who brought Macek on to work with him privately. That led to frequent trips to Miami, where Macek saw firsthand how the Heat, who are known in professional basketball for their rigid conditioning, conduct business.

“Their requirements are wild,” Macek says in Slovenian over coffee in Ljubljana, Slovenia’s capital city and Doncic’s hometown. We’re at a spot called Winner’s Lounge, just around the corner from Gym 24, where he primarily trains his 2A Sports Lab clients. “They test players every week. They measure body fat. If you don’t reach your target, you are listed on the board right away.” He pauses for laughter. “When you go through that experience to prepare for the Miami Heat season, you are ready for anything.” 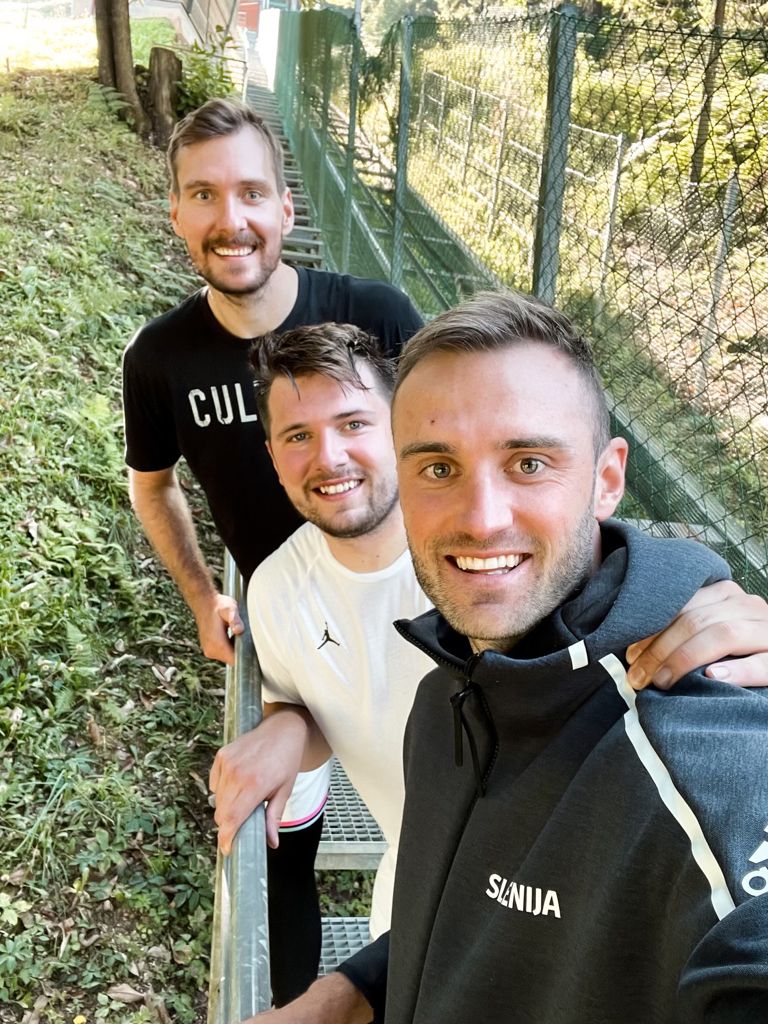 Macek kept adapting his techniques and picked up more clients along the way, including Dragic’s younger brother, Zoran. The Slovenian national team brought him aboard as their athletic trainer in 2018, and this summer, he began to train with Doncic hands-on for the first time. Working with Doncic one on one became a logical next step.

“We had good chemistry with Luka during the national team play in the summer; he liked our practices,” Macek says. “I’m a trainer that likes listening to players, to understand when they are tired, when they need an individual approach. I adapt and try to help instead of sticking to a preset plan — especially for players like Luka Doncic and Goran Dragic. I always talk to players to understand their background, how they train, what they like. So I guess he liked my approach and trusted me to continue to work with him after the Olympics to prepare for the next NBA season.”

That cooperation would not go far without the sign-off of the Mavericks’ training staff. Macek says he got it from Mavericks director of health and player performance Casey Smith, who flew to Slovenia in June to observe practices and connect with Macek.

“He looked at it from more of a physiotherapy point of view,” Macek says. “He gave some advice to our physical staff. The two of us talked a lot. We talked about training, about how to make sure we avoid any risk. He explained how they work in Dallas.”

Doncic arrived a week after the Clippers series concluded, and the two of them got to work. Slovenia needed to win a tournament in Lithuania to qualify for the Olympics, and Doncic needed to catch up, having arrived four days and one exhibition game after his teammates. Macek ramped up Doncic’s work with one goal: “He would be in peak shape at the end of the qualifying tournament.” Sure enough, against European powerhouse Lithuania in the final, Doncic dropped a 31-11-10 triple-double to secure the win and Slovenia basketball’s first-ever spot in the Olympics

Already, the team — Doncic very much included following his NBA grind — was exhausted, and the real work was only beginning. How do you convince a player like Doncic to continue training hard after two physical and emotional peaks that happened in a stretch of less than one month? Macek reverted to a trick Mavericks fans know well.

“For Luka, you need to make all of his workouts a game,” he says. “A competition. You need to try and make even his strength and conditioning training a competition. He’s a competitor, a fighter. He always wants to win. If you can make his workouts a competition, you’ll win. He’ll get the most out of it, and you’ll get what you wanted out of it. With the national team, I introduced a lot of new stuff, mostly because of Luka. Because I know if I make the workout some sort of a game, a competition, they will not know they just made 20 sprints. If I asked them to sprint, they would look at me strangely, but if they do it within a competition, it’s great for them. We did the same in our individual off-season training with Luka.” 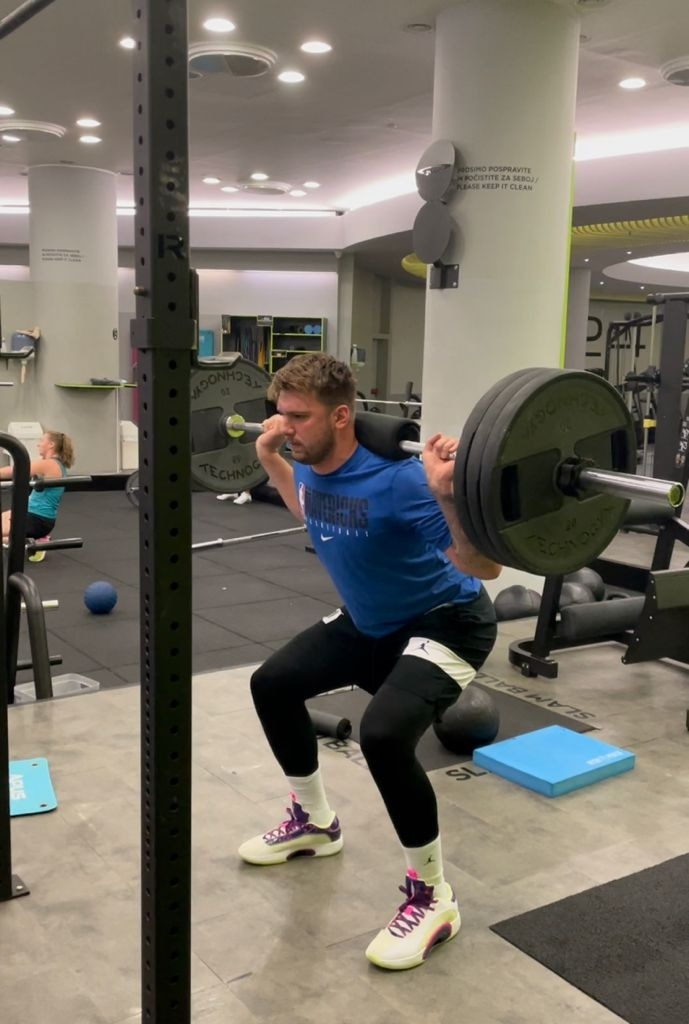 Slovenia stormed into the medal rounds, in the process becoming one of the best stories of the Games. But, eventually, the wear and tear caught up with them. They were the only team in the medal rounds that had begun training a month earlier, playing from June 14 until August 7. “Realistically speaking, the last two games we looked a bit worse physically, which is logical after all the things we went through,” Macek says.

And so, once the Games were over and Macek and Doncic began to plan their individual workouts, Luka’s first assignment was to rest. Macek estimates Doncic took a week to 10 days off, which gave them three weeks to work together before Doncic returned to Dallas. As a result, there was no time to try any ambitious new ideas. So they kept things simple, with the goal of keeping Doncic in game shape — arguably the greatest benefit of him being “more or less active throughout the whole summer.” He worked out six days a week (taking Sunday off), focusing mainly on conditioning but with some basketball training mixed in.

“For Luka, you need to make all of his workouts a game. A competition. You need to try and make even his strength and conditioning training a competition. He’s a competitor, a fighter. He always wants to win.”

Doncic isn’t the fastest guy and will never jump to the top of the backboard. Mavs fans don’t admire him for his physique. If you ask Macek, though, there’s more to Luka than meets the eye. “He has incredible genes,” Macek says. “His strength is off the charts. You can see it in his overall and his maximum strength. He has incredibly strong legs. His center of gravity is very low. So when he is in his position, when he gets low in his stance, it’s very difficult to move him.”

Macek credits that to Doncic’s father, Sasha, himself a former pro player. But it’s also a testament to Doncic’s greatest tool: his basketball IQ, which not only applies to what he does on the floor but how he leverages his physical gifts. “When Luka is posting up, or when he gets to his step back, this strength is evident,” Macek says. “And he knows how to use his strength, which makes him almost impossible to stop. When we train, because of his strength, you can do high-intensity leg workouts with him, and he’ll have no problems.”

That maximum strength Macek’s referring to is what Marcus Elliott defined as an eccentric force, which enables players to decelerate and throw their defenders off rhythm. Elliot is a physician who founded a Santa Barbara sports-science company named Peak Performance Project, better known as P3. It’s a staple in pro basketball circles, and Doncic spent multiple summers as a teenager training there. That’s where the first James Harden comparison came about, after P3 collected biometric data and found one especially striking commonality between them: you guessed it, eccentric force. Per P3 measurements, Harden ranked in the 99th percentile of NBA players in “eccentric force” metric. Doncic was among the elite as well, in the 92nd percentile. And they each specialize in one shot in particular: the step-back three, which depends on a player hitting the brakes and exploding into a shot.

That takes leg strength, most of all, and legs can be among the first things to go when a player gets fatigued over the course of a long season. Which raises the question: how fresh can Doncic remain for another 82 NBA games — plus, the Mavericks hope, a long playoff run — after just that “in-between season” to recharge?

Among the rare critiques Doncic has received so far in his NBA career concerns his conditioning. He wasn’t in optimal shape to start his rookie season, and he admitted to being surprised by the 2020-21 season beginning on Christmas Day instead of closer to spring. Any conditioning concerns, overblown or not, haven’t stopped him from making back-to-back All-NBA first teams, so it’s a matter of degree — for now. As Macek points out, “Luka is a young player, so his recovery is very fast. But this will get more difficult as he gets older.” Gifted as he is, he can’t outrun time.

On the other hand, Doncic looked great in the bubble when he had enough time to prepare and work on his body. That’s one reason why Macek isn’t concerned about Doncic taking conditioning seriously. Instead, he sees it as part of the maturation process of a young athlete.

“By talking to him, you can see he is aware of the importance of conditioning, as he will grow older and have more NBA seasons under his belt,” Macek says. “He knows things will get tougher, that he’ll have put even more effort into his body, so he’ll be able to have many more successful seasons.”

In the here and now, energy might be what will define Doncic — and, by extension, the Mavericks’ 2021-2022 season. Will Doncic have enough in the tank after another long season without a real break? Can he keep enough spring in his legs so that his step back is flying through the rim deep into May, perhaps even June?

For now, all we know is that Macek did his job. Doncic is well conditioned and ready for ball. It wasn’t the most relaxing offseason of the 22-year-old’s basketball career. But it will have to do.

Luka Dončić Is Good at Basketball

The Hottest Baby Name in All the Land: It’s Luka!