Bryce Cottrell kept his Craigslist post to the point: Looking for organic chemist with background in distilling and/or winery brewing.

He figured those 11 words wouldn’t amount to much, not after a handful of chemistry professors at the University of Texas cautioned him that securing a recipe to distill vodka from grapefruits — his plan to break into the beverage industry — could cost upwards of $10,000. To the best of his knowledge, no one had ever tried it before. And what did Cottrell know? A defensive end for the Longhorns, he had never distilled a drop of alcohol in his life.

Then someone replied. Which is how Cottrell found himself at an Austin location of Five Guys meeting a man dressed head to toe in black leather who promised a recipe and a test batch in less than a week. For $80, plus the price of a burger and soft drink, Cottrell was handed the foundation of what would become Noble Wolf Vodka, his Denton-based brand that was named Texas Vodka of the Year at the New York International Spirits Competition in 2016.

The 26-year-old recounts the story today while leaning on a stack of boxes inside his distillery, which is housed in a warehouse a few miles up the road from UNT. He has told the tale of his recipe so often that it’s now part of the Noble Wolf mythology, right along with the company’s name being an homage to his high school alma mater, Plano West Senior High. Cottrell sometimes omits one of the finer points, though: he pressed one of his teammates into coming with him as backup that day he met the man in black leather.

“I didn’t want to be a statistic getting killed by a person from Craigslist,” he says with a sheepish grin, implausible though it may sound.

That tracks with plenty else about Noble Wolf’s unlikely ascent.

Cottrell picked up football at 7 years old. He’d daydream about Sunday afternoons in a pro uniform — “To say I never wanted to go to the NFL would be kind of crazy, because that’s every kid’s dream at the end of the day,” he says — but the sport was a passion, never an obsession. Even as he blossomed into one of the state’s premier recruits in the class of 2012, he also played the trumpet, collected movies, and fished. When Longhorns head coach Mack Brown persuaded Cottrell to flip his commitment from Oregon to Texas, he did so by selling the school’s alumni network in the business world. “He didn’t say anything about football,” Cottrell says.

He arrived in Austin as a corporate communications major with designs on someday working for a Fortune 500 company, although he didn’t rule out becoming an entrepreneur. He was raised by one of the best: his late stepfather, Comer Cottrell, founded Pro-Line Corp., best known for inventing the Curly Kit, a take-home hair care system that helped elevate the Jheri curl into a nationwide trend. Comer later became the first Black person to hold a stake in an MLB franchise as part of George W. Bush’s ownership group with the Rangers.

Yet the inspiration to build a career outside of football didn’t really hit him until his sophomore year, when he was in a class with Longhorn alums Vince Young and Brian Orakpo, who were back in school finishing up their degrees. “I’m like, ‘Hold on one second. You guys were in the NFL or are still kind of playing in the NFL, and you guys are sitting here next to me in class? That shit can’t be all it’s cracked up to be if you’re here sitting next to me, because if I’m making a million dollars a year, I promise you I’m not going to be in school,’ ” he says. “It hit me that day.”

He resolved to remain patient until a good opportunity came along. All he needed was the right direction.

It came to him midway through his redshirt junior season, on a flight to an away game at Iowa State. Cottrell put on an episode of the HBO comedy Entourage to pass the time and homed in on the plotline of Turtle, the show’s resident gopher and theretofore general failure, becoming a businessman through a partnership with the real-life tequila brand Avión. “Look, if Turtle can do it, why can’t I?” he decided. 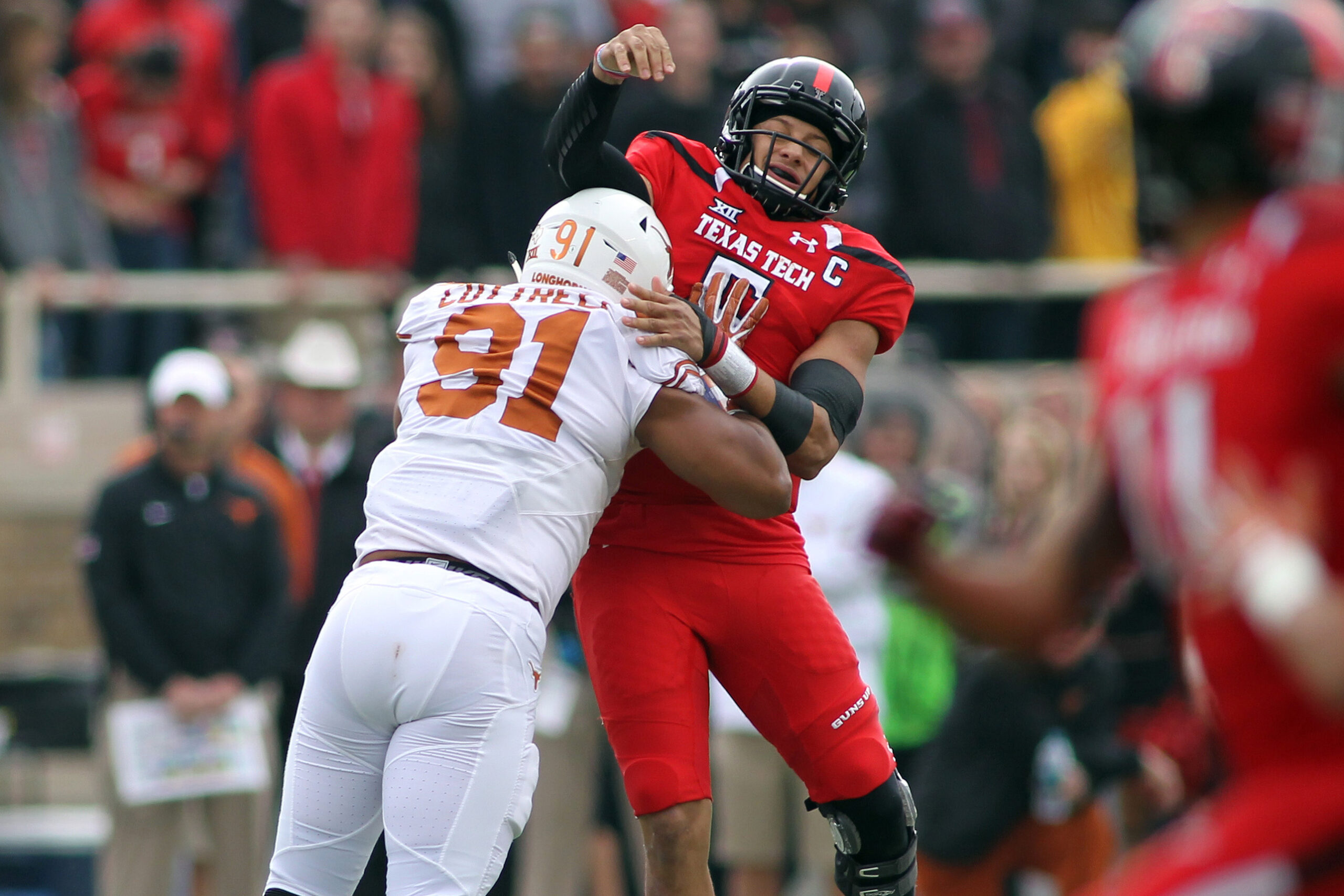 Like Turtle, Cottrell initially set his sights on tequila, but he switched to vodka upon realizing his Spanish wasn’t strong enough to converse with the distilleries in Mexico that he called seeking advice. He knew he’d need to differentiate, so he dropped in on different professors in the university’s chemistry department, hoping to find a new way to brew vodka without using a traditional base like potatoes, wheat, or corn. They recommended grapefruit; the high acidity would counteract the vodka’s ethanol, creating a smoother taste. That begat the Craigslist ad and the meeting at Five Guys. After the chemist returned with the test batch, he connected Cottrell with a man named Thomas List, who ran a distillery in Florida and helped kickstart Noble Wolf’s production. Less than five months after that plane flight to Iowa City, Cottrell’s first bottles were on shelves.

His big break came when Texas associate athletic director Arthur Johnson stopped him during dinnertime in the dining hall with a directive: answer your phone at 3 p.m. tomorrow. On the line was Alan Dreeben, a partner at Republic National Distributing Company, the nation’s second-largest wine and spirits distributor. He wanted to add Cottrell to the company’s portfolio but needed to know two things: had he ever made alcohol before, and did he have $100,00 in available marketing dollars? The answer to both questions was “no,” but Cottrell only copped to the former. He surmised that there was no way for anyone to check his marketing budget, so he took a gamble and claimed he had the money. “If they’d called my bluff, obviously, that was it,” Cottrell says. Instead, he walked away with a purchase order for seven years.

From there, he was off and running. He juggled school, football, and the business during his final year of college. Charlie Strong, Brown’s successor as Texas head coach, gave him special dispensation to miss several spring practices to take meetings and hold product demonstrations. He focused on the distillery full time following his final college season, in 2016. He eventually moved Noble Wolf’s production to Austin before relocating to Denton in March 2020. Part of the move was pragmatic; returning to North Texas allowed Noble Wolf to escape a saturated Austin vodka scene that includes brands like Tito’s, Dripping Springs, and Deep Eddy. But sentiment also played a role.

“I’m born and raised here; it has a special place in my heart,” Cottrell says. “I want to live here for the rest of my life.”

The business is growing. Cottrell has four full-time employees on his payroll, while Noble Wolf is up to five flavors of vodka sold across as many states. There are plans to expand the distillery’s warehouse space. He estimates between 90 to 95 percent of his current business comes from liquor stores, which meant his sales increased to a record level in the pandemic, with bars closed and larger brands’ supply chains disrupted.

“A lot of things were going off the shelves and couldn’t get refilled fast enough,” he says. “That gives them an opportunity to try my brand. People are like, ‘Oh, damn, Deep Eddy is out of stock right now. We’ve got this brand right there, Noble Wolf, let’s give it a shot.’ ”

Still, he’s keeping overhead low. Apart from a blood-red mural bearing the company’s name, logo, and “Denton, TX” to the left of the warehouse entrance, the space is bare bones. The only spot to rest is a black camping chair with fraying fabric on the right arm. Cottrell says he has run through a string of Houston sales reps to middling results, so rather than hire a new one, he plans to spend two out of every three weeks in Houston possibly up through the end of this year to drum up sales in south Texas.

His long-term goal is best summed up by a feeling. During his time at Texas, Cottrell marveled at how tourists inevitably drink Tito’s when they flock to Austin because it’s the city where Bert “Tito” Beveridge established his company — never mind that his vodka tastes the same everywhere else. “I want to go to Dallas and have that same sort of community as far as people supporting my brand,” Cottrell says.

That’s the sort of caché that comes with being a national brand, a tall task for any company, much less one that’s yet to shell out for hard-backed chairs. But everything else about Noble Wolf Vodka has surpassed expectations. No sense in stopping now.