Enjoy unlimited access to all of our incredible journalism, in print and digital.
Subscribe Now
Advertisement
Cheerleading 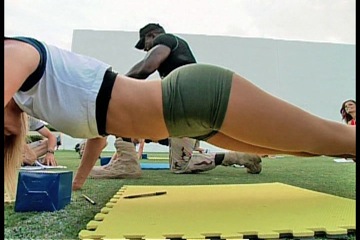 I’ve never watched whatever the Dallas Cowboys Cheerleaders show on CMT is called. Maybe it’s just called that? I digress. That show, apparently, has led to this: three workout videos, whose particulars are listed post-jump. They’re available everywhere in October, but through the Cowboys pro shops (brick-and-mortar, and online) on August 4.

And it provided the footage that led to the photo you see here, because apparently I’m doing Tim’s job now. Send comments to him, not me, as he is the spiritual puppet master for this post.

Join the Cheerleaders and their official Yoga instructor Kurt Johnsen for a series of Yoga practices inside the heart of Texas Stadium.Â  Kurt’s style of Yoga is proven to sculpt and strengthen the body while promoting peace of mind.Â  Choose between a 25-minute or 45-minute practice designed to promote fat loss and strengthen all muscle groups.Â  Each practice allows you to follow along at beginner, intermediate or advanced levels so you can set the intensity of your program.

Getting in shape has never been so much fun!Â  Join the Squad at their famous dance studio as they take you through a series of step-by-step dance routines, each one hosted by a different cheerleader.Â  These routines will transform, tighten and tone your body into its sexiest shape ever.Â  Dance your way through the entire program or customize it any way you like and Dance It Out!

Join the Cheerleaders and their official trainer Sgt. Jay Johnson on the legendary field of Texas Stadium for a series of fat-blasting boot camp-style workouts.Â  These routines will burn major calories, transform your body and kick-start your metabolism.Â  The main program features both low-impact and high-impact workouts that are proven to define, strengthen and tighten your upper body, lower body and core.Â  Each routine has modifications for beginner, intermediate and advanced.Â  Focus on a specific area, or do the entire body program for a total body workout.

CMT, a unit of Viacom’s MTV Networks (NYSE: VIA and VIA.B), is the leading television and digital authority on country music and entertainment, reaching more than 88 million homes in the U.S.Â  CMT and its website, CMT.com, offer an unparalleled mix of music, news, live concerts and series and is the top resource for country music on demand. The network’s digital platforms include the 24-hour music channel, CMT Pure Country, CMT Mobile and CMT VOD.

Dallas’ most important news stories of the week, delivered to your inbox each Sunday.
Dallas Cowboys Cheerleaders Fitness DVDs Photos That Might Get Pulled Down Power Squad Bod Press Release Day!!!

The omicron variant has arrived in the U.S. as Biden's COVID-19 vaccine mandate for healthcare workers is blocked by a federal judge.
By Will Maddox
Football