Texas is known for many iconic people, places, and things, but one fact that continually surprises whiskey enthusiasts around the world is that the pioneer of American single malt whiskey is based in Texas—Waco to be exact.

Not many people know that Balcones is a founding member of the American Single Malt Whisky Commission, whose purpose is to establish a legal standard of identity for American Single Malts. In this effort, the commission is actively lobbying federal entities to put this definition into law. One of the things that set Balcones apart from other distilleries in Texas, and across the nation, is its unique distilling process and the ingredients used in their single malt. It’s no secret to brewers and chefs alike that ingredients matter. From blue corn grown and roasted in West Texas to the first Texas-grown malted barley, Balcones aims to get the most from the raw materials it uses for one simple reason—they make for a better whiskey. Every effort is made to preserve flavors so that each sip is a complex expression of the original state of each ingredient. Constant innovation is what distinguishes Balcones from the rest. “Balcones has an insatiable drive for exploration and discovery which constantly leads to new and interesting flavor experiences for whiskey drinkers,” says Jared Himstedt, head distiller.

“Balcones is The Original Texas Whisky, leading the way for Texas Whiskey since 2009 and driving the category forward via innovation and an unwavering dedication to quality.”

The production and distilling processes Balcones uses include a roller mill, a mash tun, and other specialized equipment that is more in line with Scottish distilling traditions. Balcones’ single malt expressions also contain 100 percent malted barley—something not used before in American single malts. Each expression gives off somewhat of a fruit-like characteristic due to a longer fermentation process—another distinguishing factor in Balcones’ expressions. “It’s important to note that what we are doing is not a recreation or redesigning of what single malt is,” says Thomas Mote, distillery manager. “We are trying to create something consistent with an international understanding of Scottish or Irish single malt and making it an American single malt, because it is made in America.”

Says Himstedt, “Specifically, our Lineage expression is made by blending Old World (Scottish-grown and malted barley, used/refill casks) and New World (Texas-grown and malted barley, new casks) techniques. Balcones uses custom-built copper pot stills made by Forsyths in Scotland. These are outfitted with custom helical lyne arms, which make them the tallest pot stills in the world. We are also the only distillery we’re aware of that has separate equipment and a separate process for making European/malt-style whiskey and American whiskey. For malt, we use a roller mill and a mash tun built in 1897 that we acquired from Speyburn.” 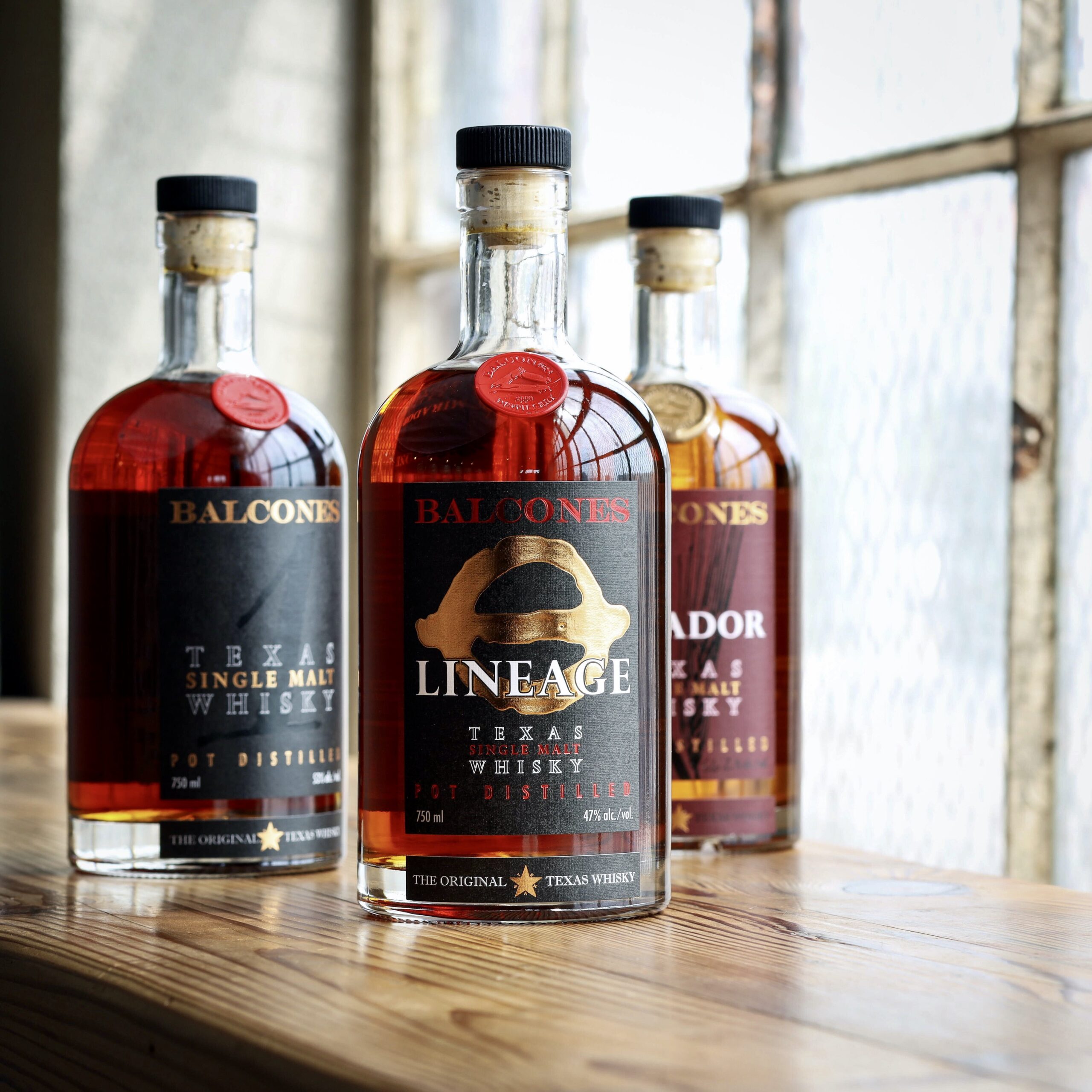 Now, which Balcones expression to try first? If you’re up for a road trip, you can head south from Dallas to visit the Balcones Distillery in Waco where you can enjoy a tasting or peruse the store for a bottle to bring home after touring the distillery. Or you can find most of Balcones’ expressions at finer liquor stores throughout the Dallas area, including Plano and Addison. You can also shop at balconesdistilling.com.

Curious what your favorite flavor might be? Here’s an overview of a few of Balcones’ single malts.

This is the gateway to American Single Malt. Lineage is a celebration of both Scotch and American whisky traditions. Using both Scottish-grown and Texas-grown malted barley and both new and refill casks, Lineage is a hybrid approach of where Single Malt came from and where it is headed. It’s for the forward-thinking American whisky fan ready to discover something new.

The brand’s flagship whisky, Texas Single Malt is 100% Golden Promise malted barley aged in new American, Hungarian, and French oak barrels. With opening aromas of toffee and overripe fruits, layers of toasted malt and honey give way to mellow notes of baked pears and apples on the palate before a long finish is accompanied by cinnamon and cloves. This whisky put Texas whisky and American Single Malt on the map and is perfect for the trailblazer.

This is Balcones’ nod to a traditional Highland Single Malt made with 100% Golden Promise malted barley aged exclusively in refill barrels. A second fill barrel malt profile, this fruity, delicate, and layered whisky is a great choice for the curious Scotch enthusiast looking to see what American Single Malt is all about.

Peated Single Malt Whisky is made entirely with malted barley that has been dried over a peat moss fire before making the journey from Scotland to Texas. The distillation process creates a rustic, earthy spirit that is also structured and robust. It has tasting notes of poached pear, burley pipe tobacco, chocolate chip cookie, and lapsang souchong tea. A throwback to the Scotch of the mid-1980s, this is an instant classic for the experienced whisky enthusiast.

This is Balcones’ ongoing series that showcases the whisky journey that they’re on and the different results of their exploration. Each Pilgrimage release will showcase different results in that exploration, and none will be the same. Perfect for the whisky collector, this year’s release is crafted with Golden Promise malted barley aged in used casks and then finished in Sauternes dessert wine barrels. With complex honeyed fruit notes of canned peaches, golden raisin, and Asian pair alongside sweet, nutty grain notes of Baklava, it finishes with honeysuckle and dry herbal cardamom warmth with unexpected pops of Chinese five-spice and ginger chews.⠀