Any American who lived through the September 11, 2001 attacks can remember how terrifying a time it was. The uncertainty, fear, and mourning rocked us all to our cores.

We’ve heard the stories of the New York residents who watched the attacks in real-time, the first responders who risked their lives to save others, and the families and friends who lost loved ones. The story we haven’t yet heard, though, is one Come From Away aims to tell–what happened to other planes, other flights and passengers, who were airborne across the world during the attacks?

In the hours following the Twin Towers crashes, The U.S. Federal Aviation Administration made the choice to shut down its airspace. Over 4,000 planes were forced to land at the nearest airport. Inbound flights from Europe were diverted to Canada. 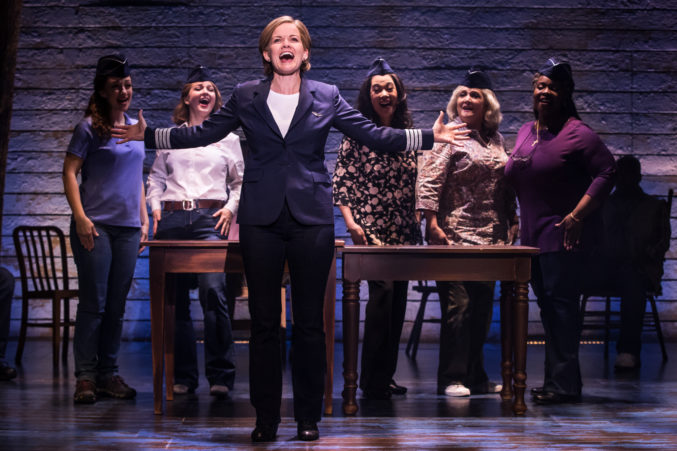 Gander International Airport, in Newfoundland, Canada, was informed that 38 planes would soon be landing. The town of Gander was home to only 10,000 residents at the time; the nearly 7,000 passengers and crew who suddenly arrived presented quite a challenge to the small community.

The residents of Gander united to welcome the “Come From Aways.” As the passengers deplaned, they were escorted to local philanthropies who had agreed to host (Salvation Army centers, churches, schools, and more). 48 hours passed before any passengers were cleared to depart. In these long, frightening two days, the “Come From Aways” and Gander residents formed inseparable bonds–bonds the show aims to portray and honor.

Many of the show’s characters are based on real people. Beverley Bass, one of the show’s lead characters, was a noted champion of aviation; she was the very first female captain of a commercial airline (at American Airlines in 1986). The real-life Captain Bass and the actor who plays her, Drama Desk winner & Tony Awards nominee Jenn Colella, became good friends as they collaborated to bring Bass’ presence to the stage.

The show’s co-authors Irene Sankoff and David Hein (a married couple!) interviewed thousands of Gander residents and “Come From Aways” to tell the story of all 16,000 individuals in the most authentic way possible.

The show breaks down borders and reminds us what brings us together, not what sets us apart. Come From Away is now on an international tour, and as it portrays the international camaraderie seen in Gander, it fosters these relations in real-time, too. (When Canada’s Prime Minister Justin Trudeau saw the show, he invited Ivanka Trump to join him.)

For more information about Come From Away and to buy your tickets, click here.

Update 3/17/2020: Dallas Summer Musicals will postpone all remaining performances of COME FROM AWAY, scheduled to run through March 22, 2020, at the Music Hall at Fair Park.