Enjoy unlimited access to all of our incredible journalism, in print and digital.
Subscribe Now
Advertisement
Charity i This advertising content was produced in collaboration between D Magazine and our sponsor, without involvement from D Magazine editorial staff.

Making the Future Brighter, One Child at a Time

Local charities make a big impact in the lives of children
By D Partner Studio | November 28, 2017|7:00 am
Advertisement
This article is sponsored content. Interested in advertising with us? Click here.
The son of a Mexican couple who crossed the border illegally, Abi Sai grew up in a rough neighborhood in Dallas. When his parents divorced, they moved to separate homes in even more dangerous neighborhoods, and Abi shuttled between the two places. Abi knew how much each of his parents was struggling financially, so he was reluctant to ask them for anything they would have to spend money on, even toiletries and school supplies. Instead, he turned to the streets to support himself.

Abi’s activities landed him in juvenile detention, a place that, for many kids, is just the beginning of a life in and out of custody. But in this case, juvie represented the opportunity of a lifetime. Abi became connected with Café Momentum, a local nonprofit that allows kids recently released from detention to train in various capacities at a high-end restaurant. Café Momentum also works with other organizations to provide services to the kids, including medical assistance, housing, and school enrollment.

Working at Café Momentum allowed Abi to focus his energy on improving his life and setting big goals for himself. Since joining the program in April, 2016, Abi has become the first person in his family to graduate high school, obtained a position with benefits at the Hilton Anatole and was quickly promoted, and enrolled at Richland College. He plans to earn a degree in mechanical engineering.

Discussing the importance and power of charities that are geared specifically toward turning kids’ lives around, Chad Houser, founder of Café Momentum, says, “Focusing on children creates generational change.” Café Momentum is a Charity of Choice in the D Gives Initiative, sponsored by Maribeth Peters Pappas of Allie Beth Allman & Associates. 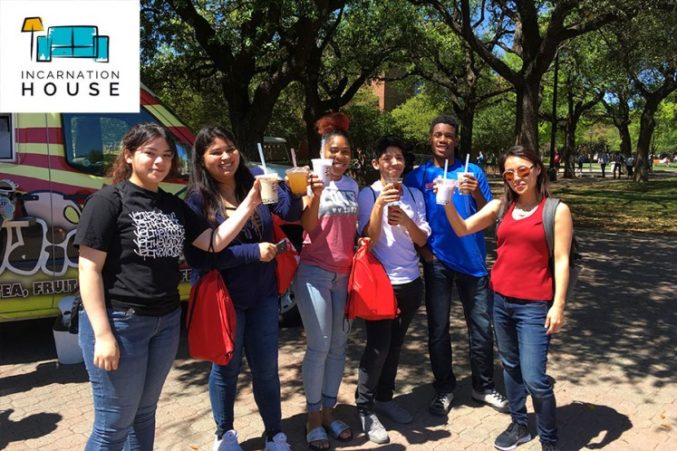 Teresa Keenan, executive director of another Charity of Choice, Incarnation House, tells an equally touching story about a child her organization helped. Julian is from a poverty-stricken family whose housing situation was never secure. As a student at North Dallas High School, he began going to the after-school programs offered by Incarnation House, located just one block from the school. Incarnation House is dedicated to breaking the cycle of poverty by offering kids from struggling families a place to feel safe, to learn, and to receive services from other charity organizations.

The confidence and support Julian received at Incarnation House helped him to obtain a job at Whole Foods, which awarded him with a scholarship to attend his dream school, Texas Tech University. Sue Krider, sponsor of Incarnation House and Allie Beth Allman & Associates realtor, says, “It’s inspiring that these kids are working so hard for their education.”

Abi’s and Julian’s stories are just two of many from children’s charities in North Texas. Other organizations focused on helping children include Momentous Institute and Orphan Outreach, also both Charities of Choice in the D Gives Initiative. Susan Bradley, sponsor of Momentous Institute, highlights that organization’s “holistic approach to its work,” noting that it integrates children’s families into its services. The Plano-based Orphan Outreach organizes trips to Guatemala, Honduras, India, and Russia to care for children without parents. Bev Berry, sponsor of Orphan Outreach, has gone on multiple trips with the organization and says, “Charities that are helping children are giving them hope for the future, and if they have hope and know that they’re loved, they can conquer anything.”

Dallas’ most important news stories of the week, delivered to your inbox each Sunday.
Cafe Momentum D Gives

Qentelli focuses on bridging the gap between business and technology.
By D Partner Studio
Sponsored Content

Dedicated attorneys devoting their careers to helping others and their families after devastating accidents or death.
By D Partner Studio
D Magazine Directories