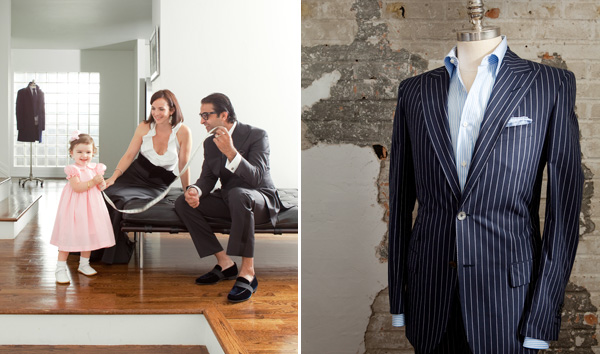 Gable and Ed Shaikh with their daughter Hadleigh; a custom suit at Hadleigh’s. photography by Joshua Martin
photography by Joshua Martin
There are plans for a storefront, but for now Hadleigh’s remains hidden in the Kessler Park neighborhood of Oak Cliff. You will need an appointment. At the door, you will be greeted by the charming Adnan “Ed” Shaikh or perhaps by his adorable wife, Gable. If you prefer, they can come to you, but then you’d miss meeting their 2-year-old daughter, the eponymous Hadleigh herself, who has the run of the place. A glass of wine? A panino? There is no rush. The Shaikhs will want to get to know you before the measuring begins. They met while working at the Ralph Lauren store in Highland Park Village. She had just moved from New York, where she graduated from the Fashion Institute of Technology. He was the third-ranked Ralph Lauren salesman in the country. They were friends at first, then more than that. Ed went on to become a buyer at Stanley Korshak, and Gable followed. By then they were engaged. Last winter, they decided to open their own atelier, Hadleigh’s, selling bespoke clothes for men and women—everything cut and sewn by hand in Italy, made to fit you and only you. You will need to take your wallet. A Hadleigh’s custom suit starts at $1,700; one by Cesare Attolini could cost five times that. To finish the look, Hadleigh’s carries Mazzarelli dress shirts ($600) and bench-made shoes from Barker Black (wing tips, $750). There are lines such as Emanuele Maffeis for women who are similarly unconcerned by price points. Ed says most of his very private customers buy by the dozen. If that sounds like you, make an appointment by visiting www.hadleighsbespoke.com.