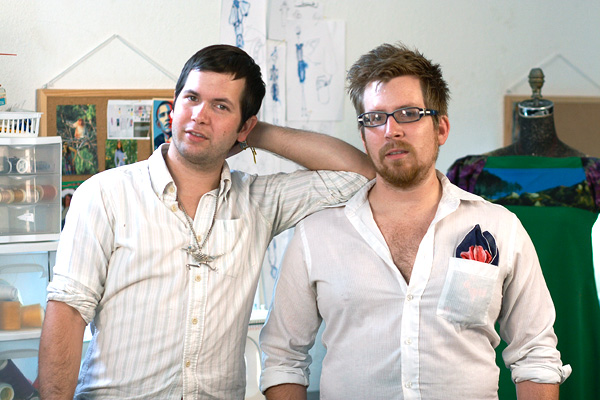 Andrew Bayer and Doug Voisin of House of Dang. photography by Kevin Hunter Marple
photography by Kevin Hunter Marple
Ladies love pockets. That’s one of the many things designers Andrew Bayer and Doug Voisin learned during their three-year stint as owners of House of Dang, the popular clothing and vintage shop that closed its doors in late July. They also learned that running a store takes a lot of time, time they would rather spend growing their women’s wear line, also called House of Dang.

“People just knew us as more of a vintage store in East Dallas, and people didn’t even know we had a clothing line,” Voisin says. “Whenever you have a retail space, you can’t go anywhere, you can’t do anything. We want to expand our line, and we could expand it only so far before we had to come back to the store.”

Now the guys have moved operations to a studio in the Bishop Arts District that they’ll use as a workspace and showroom for their designs, which they describe as playful and comfortable. “The line is very youthful and energetic,” Bayer says, “and we use a lot of really bold colors and a lot of jewel tones.”

Think knit dresses with hoods, soft tees, and pattern skirts with, of course, pockets. All the pieces are fun and wearable, which is another thing the duo discovered during their retail days. “We got to learn what people will and won’t wear, more of like functionality of clothing,” Voisin says. “We want to make something a girl can actually wear, that will be part of her closet, that she can pull out at night or during the day.”

Bayer and Voisin share the new space, dubbed Studio 411, with friend and accessories designer Tara Tonini, who they say will help keep them motivated. “She’s going to keep us on our toes,” Bayer says. And that’s a good thing, because the boys have some big plans. “We want to be a nationally recognized brand,” Bayer continues. “I don’t want to be known as crafty or just an independent designer. I don’t even understand what the independent designer thing is. We’re designers.” Shop the collection at www.thehouseofdang.com.