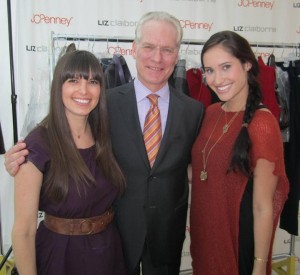 Firstly, let me start off by saying that not only is Tim Gunn as poised and put together in person as he in on TV, but he’s also incredibly warm and has a sense of humor. We asked him what he thinks of Dallas style, and he had a handful of positive things to say. According to Mr. Gunn, we’re “elegant” and “polished,” and our “city is immaculate”. Thank you, Tim! We try. (We try really hard.) His one qualm? “Does the hair really need to be that big?” Good question. I’ve spotted (and, on occasion, photo-documented) more Bumpit-ed hair than should be legal in one city.

Moving on, though, the question we handed over to the stylist Tim Gunn was this: “How can you take a trend and make it yours without investing in something you won’t be able to wear the following season?”

He basically said, “I hate trends.” He reminded Kristin and me that not only are the season’s trends contradicted among the pages of our beloved glossies—true—but they’re also fleeting. Instead, he offered, “Wear what works for you.” It may not stop me from loading up on military-inspired garb this fall, but the point is to flatter ourselves rather than soley fit the season’s theme. I dig that.

“Ask Raya” Coming Soon to a Computer Near You

Where to Find A Perfect Summer Vest