Chateau des Grotteaux, A Historic Lakewood Estate, Is Now Off the Market

Chateau des Grotteaux, A Historic Lakewood Estate, Is Now Off the Market

Advertisement
If you’ve ever taken a drive down Gaston Avenue, you’ve passed the wrought-iron gates of Chateau des Grotteaux. This luxurious, French-inspired mansion has been a Lakewood landmark for nearly a century.

Thornton completed construction on the then-unfinished home, which was inspired by a chateau in Normandy. The estate was named after a cavelike tunnel that stretched from the southernmost corner of the property to White Rock Lake. (“Grotteaux” comes from the French word for cave.) It’s rumored that this pathway was used to transport liquor during Prohibition. Though the tunnel was sealed off by the city of Dallas years ago, the rest of the estate remains largely untouched since Thornton’s death in 1964. It is one of the many thorny pieces of Dallas history attributed to Thornton’s legacy, which has come under fresh scrutiny given that he was a prominent member of the Ku Klux Klan. There is a movement afoot to rename the highway that bears his name.

His old home has changed hands several times in the decades since. The most recent owner, Michael Fahey, passed the property in 2005 while on a leisurely drive. He was instantly enamored–so enamored, in fact, that he put in an offer on the home and took the For Sale sign from the yard to ward off other potential buyers. Fahey moved in, then spent over a decade restoring the home to its original splendor.

The 1920s-era façade was updated with a privacy wall, a custom roof, oxidized copper gutters, turret covers, and new doors and windows. In the backyard, the second oldest residential pool in the city was resurfaced and transformed into a saltwater pool. Fahey also installed several bridges and ponds, quaint outdoor sitting areas, and a secret garden. 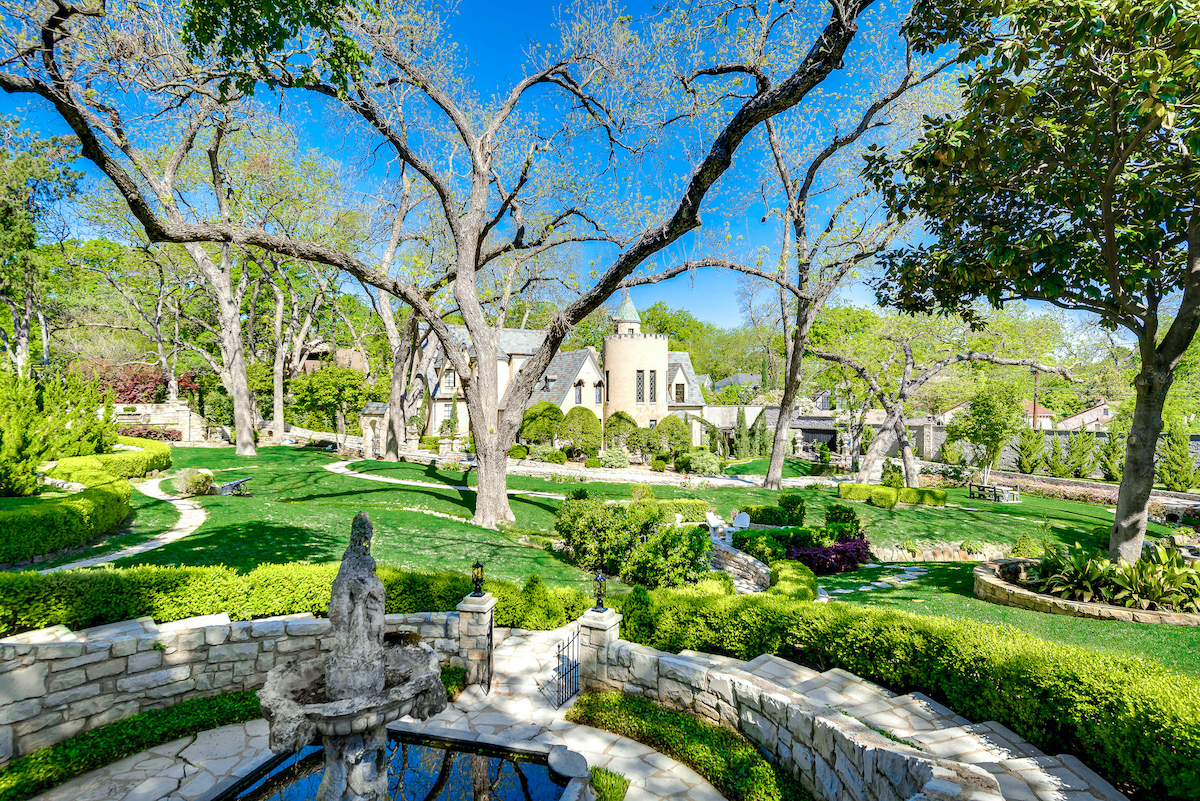 After 13 years in Chateau des Grotteaux, Fahey listed the home with real estate agent DeCarla Anderson in 2018. It finally sold earlier this week.

“So many people in the community have speculated if this piece of Dallas history would be saved, as many [similar] properties have been demolished in recent years,” said Anderson.

Chateau des Grotteaux’s new owners are planning to make the estate their home. Mike and Ellen Smith, who recently lost their Dallas home of more than 20 years in a fire, closed on the Chateau earlier this week. The Smiths are working with an architect to design new additions, including a kitchen expansion and an updated garage, that will fit the home’s aesthetic.

Take a tour of Chateau des Grotteaux in the gallery below.
View Gallery