Chances are, I am more serious about cycling than you are. My bike is expensive enough that it caused a fight with my wife when I bought it. But I ride maybe only 50 miles a week. No way did I need a $300 bike-fitting session with an Italian robot. I asked for it, though, and the Bike Mart folks said they wouldn’t charge me. So here we are.

Bike Mart you might know as Richardson Bike Mart, founded in that city in 1962 by Rhonda and Jim Hoyt, who had no idea at the time that they would one day open stores in Frisco and McKinney and near White Rock Lake, thereby confusing an untold number of people. With business growing online and across the Dallas area—and with the September opening of what they’re calling a Preston Hollow store (actually Bluffview)—they shortened the name.

Back in July, they took delivery of the aforementioned Italian robot (my term), a stationary bike that adjusts itself as you ride it, using input from a camera and a computer running an algorithm fed with data generated by tens of thousands of riders. It’s called the idmatch system, developed by Selle Italia, the venerable 124-year-old saddle manufacturer. Bike Mart has the only idmatch system in the United States. Totally state of the art.

I was curious: how far off from the Italian notion of ideal might my bike’s setup be? I don’t race, so aerodynamics and power output aren’t major concerns, but just as with pants, fit does matter. 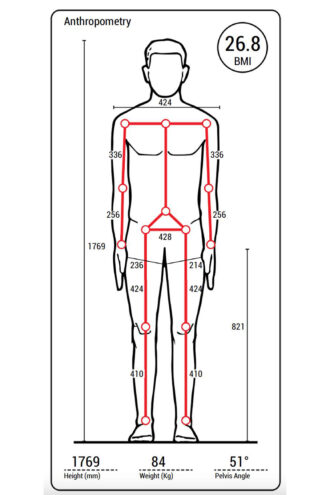 A body scan of the author.

A guy named Sean drew the short straw. At the flagship Richardson store, he ran me through the idmatch system, watching a computer monitor as I pedaled the robot. Every so often, it whirred and moved beneath me. I imagined my data speeding from Richardson across the Atlantic to servers in Casella d’Asolo, the hamlet in Northern Italy that is home to Selle Italia. I knew how Dave Stohler felt in Breaking Away and considered affecting an Italian accent.

Then it was time for the results—which were shocking. Among other adjustments, the robot wanted to lower my saddle 3 centimeters, quite a bit. Sean was flummoxed but went ahead and made the changes. At one point, he mentioned that a Selle Italia rep was coming to town in a few weeks and that he had “a thousand questions for him.” Me personally, if I were working with a robot from another country, I’d want to have fewer questions about it.

Anyway, after making the changes, Sean wisely unmade them. He wound up using a plumb bob, a tool invented by Egyptians 4,000 years ago, to check the position of my knees over the pedals. We took the bike behind the store, and he watched me ride. Basically, my original setup had been on point.

So here’s what I can tell you: by the time you read this, I’m sure the folks at Bike Mart will have gotten most of their thousand questions answered. And, no matter what, human touch will always be important. Sean sent me home a happy cyclist. I’d been experiencing some numbness in my toes and thought my shoes were to blame. Sean could tell by looking at my old saddle that it was the culprit. The new saddle, which set me back $300 (coincidence?), has made a huge difference to my feet. And my bottom.

Write to [email protected] This story originally ran in the October issue of D Magazine with the headline, “Sitting (Not So) Pretty.”