It’s not easy to open a tasting-menu restaurant, certainly not in these times of beleaguered staffing and especially not in a city that, historically, has not had many and, notoriously, does not really understand them. But that’s what Amy and Casey La Rue did in June, bringing their Carte Blanche to the former Mudsmith space on Lower Greenville. To up the ante, it’s a bakery, too.

It’s what the La Rues have been building toward since they met in Phoenix, in 2014. They have been cooking together around the country since, in Connecticut and then New Hampshire before they came to Dallas in mid-2019 and began Carte Blanche as a series of pop-ups. In those early dinners, often in Airbnbs rented for the purpose, Casey turned out dishes of subtlety, sophistication, and beauty in multicourse tastings. It was just him in full control of a diner’s experience, with Amy masterminding dessert. In those meals, they entwined the double helix of their skills, passions, and backgrounds—Casey, the son of two chefs, and Amy, the daughter of an executive chef at the Ritz-Carlton. 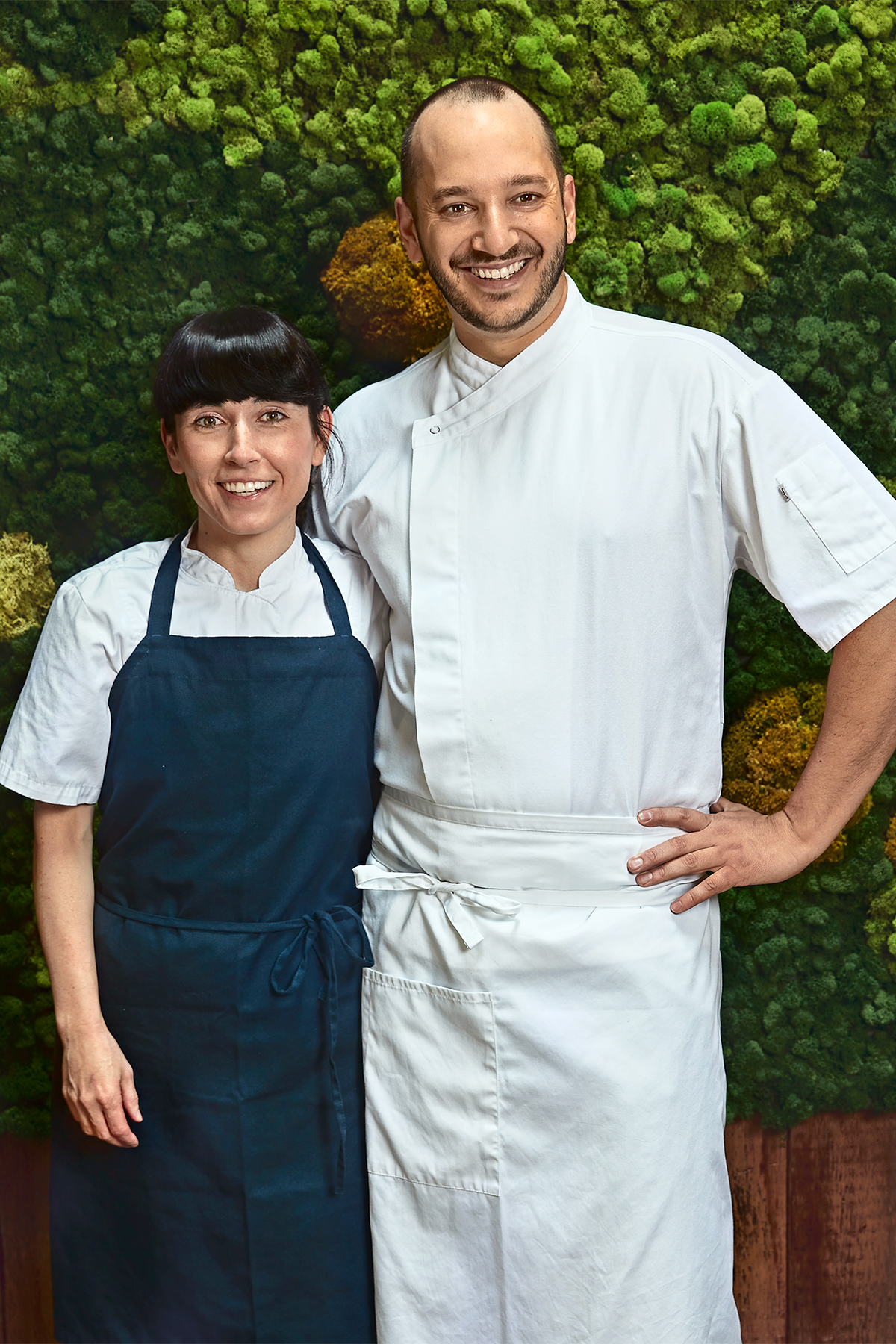 Casey worked in fine dining, at Daniel and Per Se in New York, Clio in Boston, and finally Joël Robuchon in Las Vegas. Like many creative chefs, he experienced the frustrations of high-volume reality, which made him desire this command and the leeway it brought to spool ideas out over the salvo of a dozen or more dishes, balancing timing, pacing, harmony. Opening a brick-and-mortar, the La Rues might have feared the elaborate choreography necessary and backed down to another model.

But they don’t dream small here. The husband-and-wife team has the courage to offer viennoiserie in the mornings, the famously finicky category of pastries that includes croissants. And in the evenings? A $175 12-course tasting menu and a $95 five-course iteration that is a little sister, much more a la carte, plucking from the 12-course whole megillah.

Tasting menus are intense—for staff, for kitchen, for diners. But they can be engagingly creative. Carte Blanche reminds us that in the hands of a chef who grasps the form, they can be filled with the spores of finesse and novelty. And while a laboratory like Misti Norris’ Petra & the Beast offers rare gems of seasonal wizardry, there is room for more that are slightly rogue, but with a well-articulated sensibility. Room for Carte Blanche and the La Rues, a most elegant addition to our scene.

You enter and it’s a hybrid place, a quiet hideaway with wooden beams, which recalls to me, in fact, another tasting-menu giant, Blue Hill at Stone Barns. The big wooden door of what used to be Mudsmith opens in the morning to a vision of a pastry counter and in the evening to polished glassware and servers in black vests delivering dishes in flights. It’s a little disorienting to walk in to encounter the big central bulk of the former coffee station, but the hostess ushers you to one side or the other.

In the kitchen—glowing, white and steel, impressive—you can see the bannetons, bread-shaping baskets, over the oven. Beneath them, assembling the dishes, cooks are tweezering herbs and edible flowers and macerated blueberries into place, piping Earl Grey pastry cream from bags.

It would be difficult to overstate the intelligence and skill behind Amy’s morning volley of pastries. She deals in the delights of vanilla-scented pears sunk with cream cheese into Danish pastries; chocolate and frangipane folded into bronzed croissants; and crullers whose eggy interiors resemble eclairs and make you think of them longingly once they’re gone.

Meanwhile, at night, Casey borrows from the seasons and spins their offerings into gold. 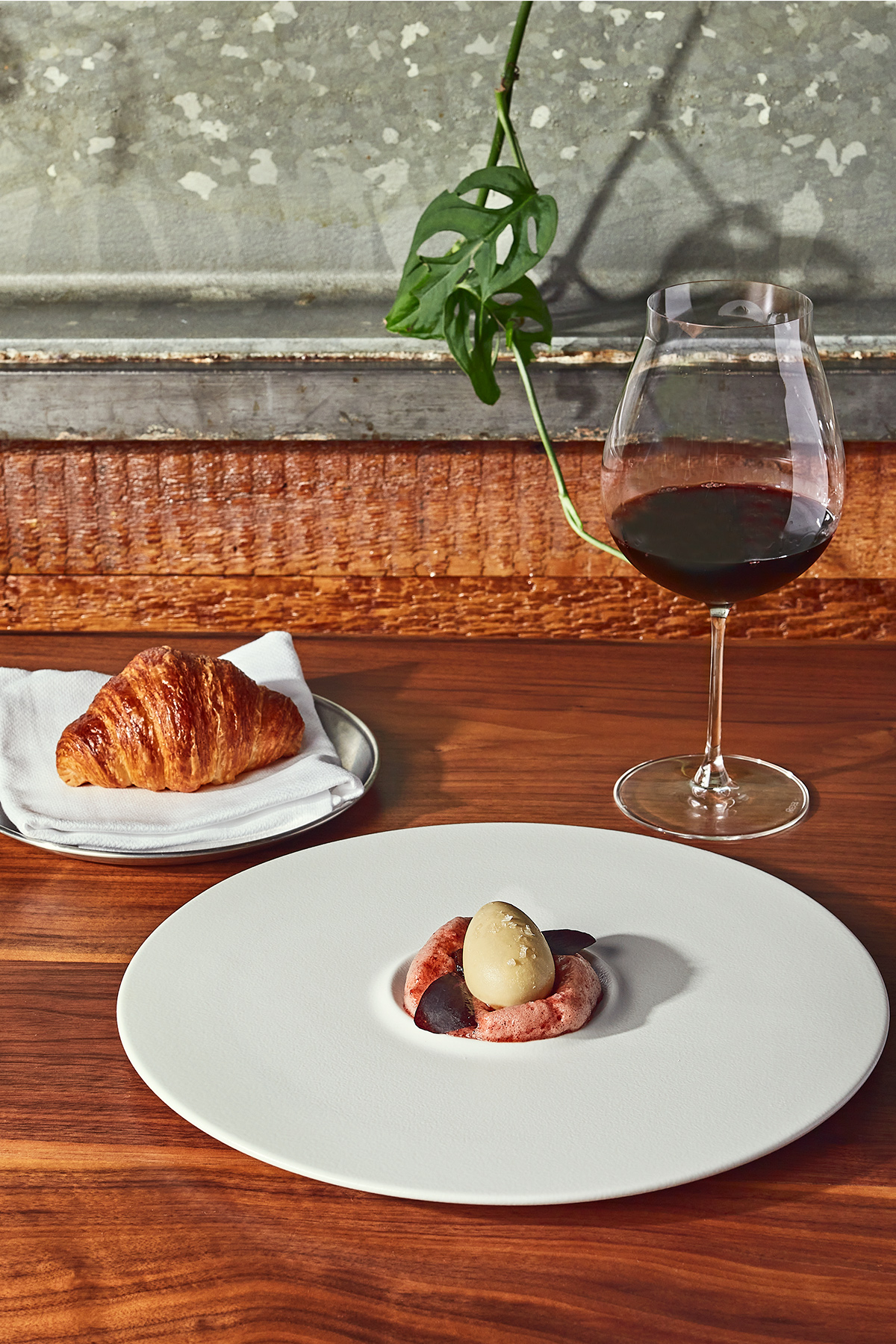 Grape Expectations: On a late-summer night, the foie gras mousse, a signature, is served with both a compote and blush-pink foam of smoky, hearth-charred Concord grapes. When paired with a buttery croissant, it’s almost like an ultrasavory PB&J.
Brittany Conerly

In the 12-course tasting menu, the amuse-bouches, or what some chefs call “snacks,” form a beautiful playground on a ceramic surface that mimics a stone. They are fun, almost more fun than anything else you’ll eat, and might include a shot of velvety, chilled kohlrabi soup with pickled ribbons of the vegetable tucked in and drops of lemon oil that brighten. (Citrus’s bright verve—of finger lime or Meyer lemon—is a flavor Casey leans on successfully in other dishes, too.) Another night a coconut and apple soup bears coconut powder, like snow.Then it’s on to a cold course: fluke crudo, white soy, and heirloom tomatoes. I find not enough transformation in the elements, save the dehydrated tomatoes on top. But they are a genius move with the umami of the soy, a dark pebbling over the pale, translucent fish.

The foie gras mousse, a signature, is surprising, served on a big, white plate one night in August with smoky, hearth-charred Concord grapes—as a compote and a blush-pink foam. The flavor is superb, and, with the buttery croissant (so full of butter, at times it’s weighted down with it), it’s almost like an ultrasavory PB&J. The intelligence of the combination gets played out seasonally: next, pear; earlier, smoked peach. The varied lipstick shades of the grape version remain my favorite, especially when paired with sake.

Tasting menus are intense—for staff, for kitchen, for diners. But they can be engagingly creative.

And in many ways, this course, with its linen-tucked viennoiserie, is a perfect meeting of the two of them.

If you so choose, all throughout, the tea pairing rivals wine, with finds like a rare oolong, carbonated in a siphon and served in a balloon wine glass.

Perhaps the smartest dish, to me, in mid-August, is the wild boar belly, which presents not at all like I might expect the rich meat, with deep, dark sauces. Definitely, I anticipate wine. Maybe a demi-glace with wintry intensity. Not at all. This landscape is all sea: a feathery-light clam and fennel fumet with little clams snuggled into a potato purée. Voila! A very elevated surf and turf, in essence. It’s inspired by clam chowder—and brilliant.

And just when you think you want a break, just when panic—and delight?—sets in, since you are on only seven of 12 courses, there are carrots. They’re sprinkled with a variation on the Egyptian spice mix dukka (heavy on coriander, studded with hazelnuts), though the bridge is maybe missing between that and a chicken jus. Also, it makes it nonvegetal.

In a move espoused by a growing and enlightened corner of the culinary community, Casey does not use beef, opting instead for wild game. But you do not miss it. Far more elegant is a trio of Broken Arrow Ranch antelope (when I visit, it has just replaced elk): a loose, rich sausage; a grilled segment of loin; and a pithivier, a puff pastry daintily filled with braised meat. Something about the way the bordelaise marries with a sunchoke purée fires certain reliable synapses in the brain. 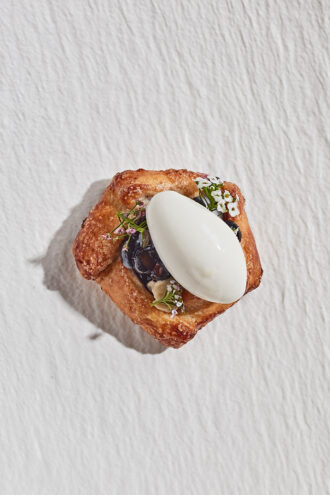 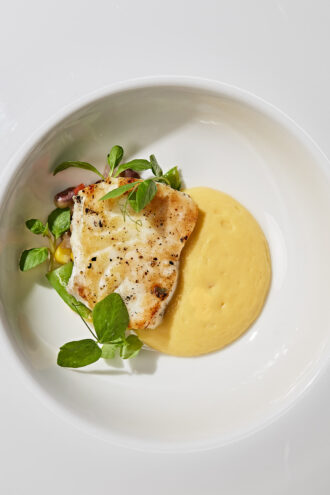 The drift of corn foam gracing a sea bass dish with seasonal succotash was yellow like sunshine and pure summer.
Brittany Conerly

Next, perhaps, a syrupy vin santo with a most thoughtful cheese plate, sporting candied kumquats and cherries. On such a pretty plate, the honey gelée is like translucent gold.

I find more soft billows as I spoon into a brilliant, luminous sake-sabayon, laid like an eiderdown over perfectly textured pineapple sorbet. (They churn ice creams, sorbets, and sherbets daily in small batches.) The voluptuous intermezzo is ridiculously simple and ridiculously good, like the best pineapple whip you’ve ever had. A woman sitting at a table across the room from me leans back, as though she were spooning it from a pint carton at home, wearing her most comfortable lounging clothes. It’s a funny, fabulous image. 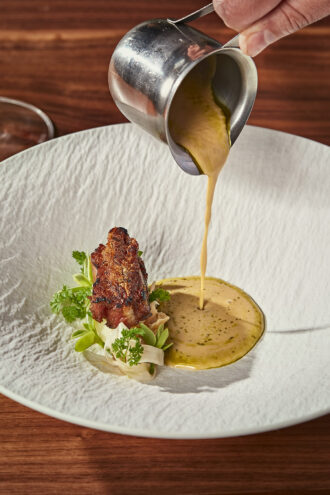 There is much promise here. You see where the connections don’t quite happen yet, when an ingredient or herb seeks its mate. But what the La Rues are doing at Carte Blanche is ambitious and thoughtful and complex.

A few things, like black truffle-showered agnolotti, are not perfect. Not gossamer and thin like ones I have just eaten a few weeks before at Monarch. But they are so much more interesting, in many ways, and more intimate. I like them infinitely more.

Desserts do not all match the brilliant clarity of the best savory dishes. It will be a quantum leap to the more technical kinds of creations Amy intends to make again in the style she was executing for pop-ups, boasting trompe l’oeil effects and glossy mirror finishes. The most rustic I have is a blueberry galette; the most delicate a mousse-y cheesecake.

Gazing at the wall of moss that Amy created at the far end of the dining room, I reflect on how the pair has changed this space that they have taken over. There are many tasting-menu spots in the grand scheme of things, nationally, though not many that lean on a husband-and-wife duo so entirely for so much—now with a sommelier and staff to do what they once did themselves. By the time I step out into the night, charmed by their rustic-chic accomplishment, I am sated, and more than that: I am rooting for them.

The next morning, I know I can come back, eager and hungry, for a pear-cream cheese Danish, a cruller, and rooibos milk tea.