Highland Park harbors a lot of oil money, none of it older or more likely to be spent on yard art than Jane Benedum’s trust fund. Benedum’s great-uncle was the wildcatter Michael Benedum. An oil field in the Permian Basin bears his name. His drilling helped feed the sovereign wealth fund upon which the state of Texas built its higher education system.

Jane grew up in deep East Texas, where her father, J. Claxton Benedum, discovered his own oil while drilling for water to use on his two private golf courses. She went to Hockaday and now lives on Beverly Drive, in a house her family has owned for 50 years. Shade from towering oak trees makes growing grass difficult, so years ago she started filling the space with potted topiaries, a marble fountain, two life-size wooden bears, lion statues, and so on. Her yard drew attention.

“I’ve had people from the other side of East Jesus come over here, get out of the car, introduce themselves,” says the 71-year-old Benedum. “I made friends with people. They would stop, and we would talk for, like, 30 minutes.”

Then, in September, she received a notice from the town of Highland Park informing her that her yard violated a new ordinance that stipulates “statues/sculptures, topiaries, pots, planters, containers, and other similar freestanding landscape receptacle(s) that individually or collectively take up space in excess of 5 percent of the area of the front yard shall be prohibited.” She believed she was being targeted. “I was shocked,” she says. “I was hysterical for a week. I couldn’t stop crying.” 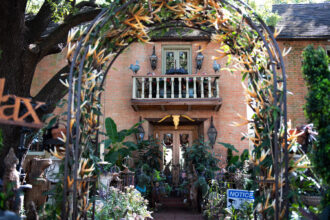 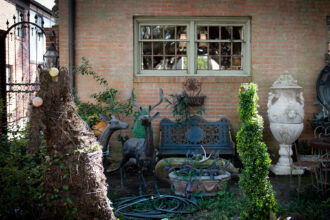 The tears dried, and out came the talons. Benedum employs no shortage of lawyers. One of them has informed the town in writing that “the objects already present on Ms. Benedum’s property are grandfathered as nonconforming uses.” She says she is prepared to take her case to the Supreme Court, pointing out that she doesn’t have any children or siblings to otherwise occupy her time. “What else do I have to do?” she says, laughing.

As for whose delicate sensibilities might have been offended, giving rise to the ordinance, Benedum is at a loss. She says she’s on good terms with all her neighbors—though the Monday after receiving the notice of violation, she called Town Councilman Craig Penfold to ask for help. He happens to live two doors down. “He’s the biggest piece of shit liar I’ve ever known in my life,” she says. “How’s that for a quote? He calls me his favorite neighbor, but he’s a politician.” She claims he told her he didn’t know anything about the matter, even though when she called him, just weeks earlier he’d voted to approve the ordinance.

The councilman didn’t respond to multiple messages from D Magazine seeking comment. At press time, in early October, the topiaries and the bears were still standing.

20 Garden-Inspired Finds for Your Freshest Summer Yet