The speakeasy was born from necessity. During Prohibition, a clandestine location was less about exclusivity and more about the survival of drinking culture. A century gone by, and I’m sitting at the highly glossed wood bar at Apothecary in Lower Greenville, where ties to the origins of secret drinking dens are tenuous. Yet, the furtive drinkery’s menu of whimsical—and in some cases downright wacky—cocktails feels relevant nonetheless.

The swank windowless room, lit by soft-glow lamps and outfitted with plush, amber-hued velvet banquettes, belies the eccentricity and playfulness of Apothecary’s offerings. Three sections take you from approachable (Over the Counter) to slightly offbeat (Prescription) to “Whoa, is that bleu cheese?” (Illicit Elixirs). And, yes, it is bleu cheese—infused into mezcal. It tastes like it sounds. It also sounds like a dare, but, really, it’s a part of the bar’s don’t-be-so-serious ethos. 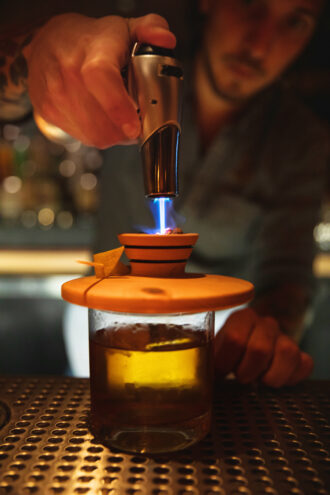 “We were concerned Apothecary was going to be, like, this nerdy cocktail bar where we were doing these funny little things,” says Tanner Agar, CEO and creative director of Apothecary and sister restaurant Rye, the McKinney restaurant that recently opened an outpost next door. “And it just hasn’t been that way. Apothecary has been busy.”

Busy making tipples such as the Pekin Tom, in which Stellum bourbon is fat-washed with duck confit—that is, infused with duck leg fat that is later cooled and scraped away, leaving a savory whiskey in its wake. Meanwhile, lapsang souchong tea-infused peach liqueur and absinthe also meet in the glass. It arrives smoky with a yellow ducky cocktail pick. Then there’s Cacio e Pepe, a libation that lives up to its creamy pasta namesake and includes Grana Padano-washed gin.

“The menu has to be balanced,” Agar says, “but short of that, this allows us to have such a freedom that I never felt growing up in kitchens.”

If freedom means a brine-tangy oyster mushroom doing its best impression of a bivalve resting upon a charcoal-tapioca “shell” with a candied Fresno chile and brine foam, and if snacky bar bites come quirkily named and perfectly executed (see: Green Eggs and Jamón made with serrano ham, electric-green wasabi fish roe, and cognac-shallot aioli atop an English muffin cracker), then let freedom ring—quietly, inside a dark cocktail lounge on Greenville Avenue.

Write to [email protected]. This story originally appeared in the November issue of D Magazine with the headline, “Of Ice and Gin.”