It is difficult to describe an evening at Shoyo. Perhaps because once you’ve found it, it feels like a secret you shouldn’t give away, something almost too personal to share. As if to do so would be like disclosing the address of a former lover.

We certainly have places in Dallas where one can indulge in the luxury of high-end omakase tasting menus. There is the impeccable allure of Uchi, the glittered sleekness of Nobu, the precision of Yutaka, the ineffable classicism of Tei-An. Among them, you’ll find excellent variations on the singular, multipart experience with intricate stylings that places you solely in a chef’s hands. But it is currently imperative—and more nuanced—to grasp the specialness of what is happening at Shoyo, Jimmy Park’s new omakase-only enclave. To begin with, none of the others has its intimacy.

It sits hidden in plain sight on a Lower Greenville corner as the night sky darkens, with a façade of gold tiles in black-painted brick, its logo a beacon, round and glowing in the night. Here, Park has created a traditionalist facsimile, down to the servers in black pants, black socks, all-black sneakers—though it also involves imagination. 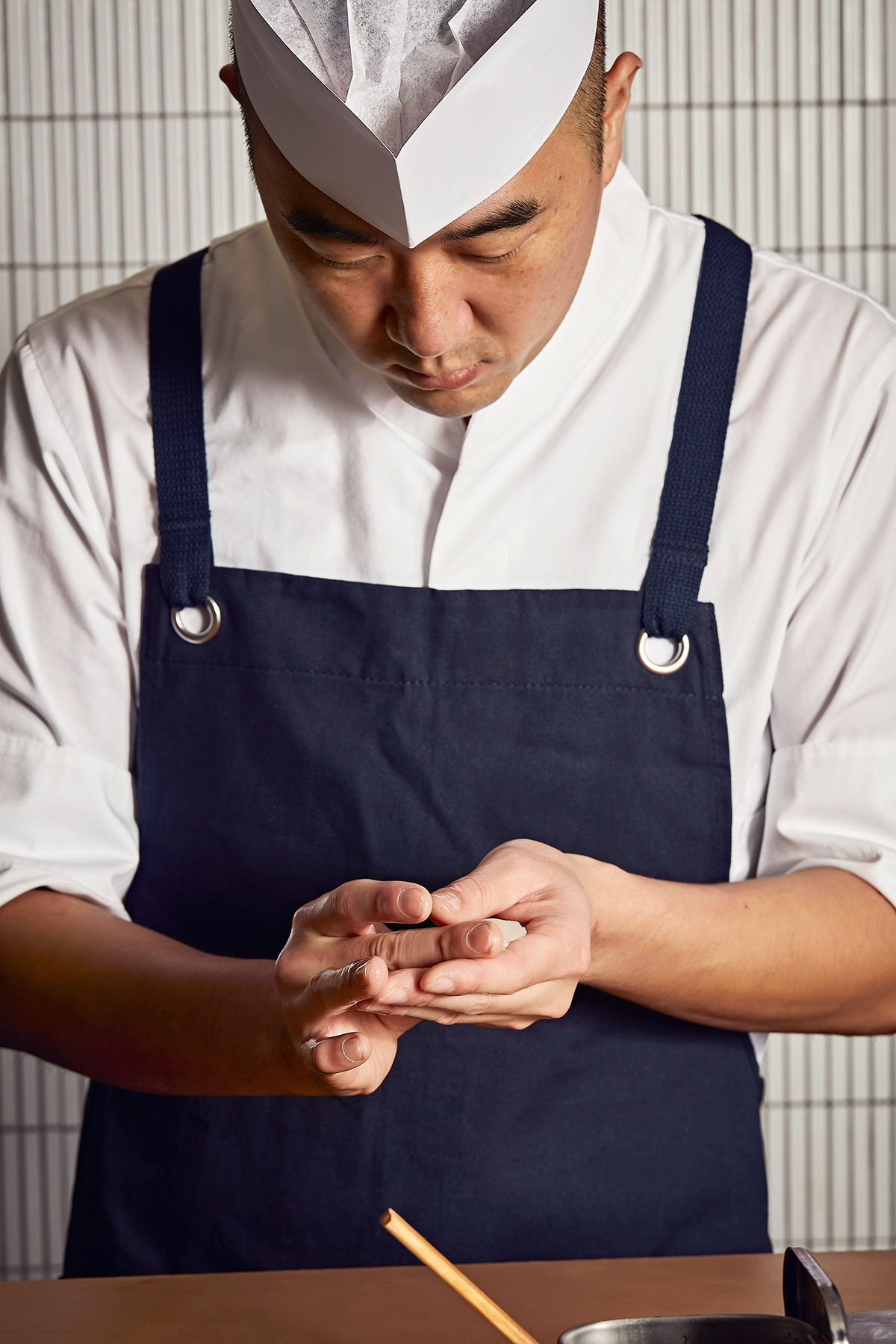 On a recent evening, a lucky group of us wait in the vestibule, congratulating ourselves for being on time. There are only two $175 seatings for a dozen diners per evening, at 5:45 and 8:15 pm. We have no idea what will unfold over the next two hours, save that it will likely suit the demure hideaway, a unique and smart meal full of enchantment. And that, after 16 courses, we will almost certainly be full.

I am lucky to be here. We are all lucky to be here. Since its opening in June, Shoyo has commanded intense curiosity and intrigue. So much so, in fact, that my two attempts to score a spot within the first few minutes of the mad-dash, first-of-the-month reservation openings foundered. July passed, and August, too. I had to ask for special reservations for my two visits in September, so that I might review Shoyo before yet another month passed. (This is unprecedented in my dining critic career, but so are the times.)

Past the interior sliding wooden door, we see Park and executive master sushi chef Shin Kondo, known as Shin-san, carefully cutting fish, wielding their honed knives as we settle in. Once service commences, we witness the beautiful choreography of Park’s movements. His wrists move with the practiced sureness and liquid elegance of a magician, like a prodigy doing a Rubik’s Cube, like a jeweler weighing the heft of a watch, turning its links on his wrist, gracefully, rapidly. His voice rings out, young, strong, and firm.

For each bite, the carefully cut and scored fish drapes over his fingers, the way it will over the rice—the variegated shades of kinmedai’s lightest blush to toro’s darker rose carved from the mass by a gem cutter. He flips and carefully stacks each sliver as one might touch a baby’s head.

Next to him, Kondo has slightly hooded eyes, over which sit eyebrows like fat caterpillars.

They came together serendipitously. Park, a kid from Hawaii, learned there his love of fish and the wealth of the seas. On the mainland, he sought a flurry of positions at Matsuhisa in Aspen and Nobu locations in San Diego and Houston, juggling responsibilities as a single dad. All throughout, Kondo, corporate executive chef for Nobu Matsuhisa’s empire, was guardian, goad, and guide. Eventually, Park landed here, where he joined Kondo at Nobu Dallas. Soon thereafter, he helped open Pōk the Raw Bar and then Nori Handroll Bar in Deep Ellum with partners. When Kondo announced semiretirement, Park coaxed him back.

We have in them the old and the new. They magnificently yoke the two. 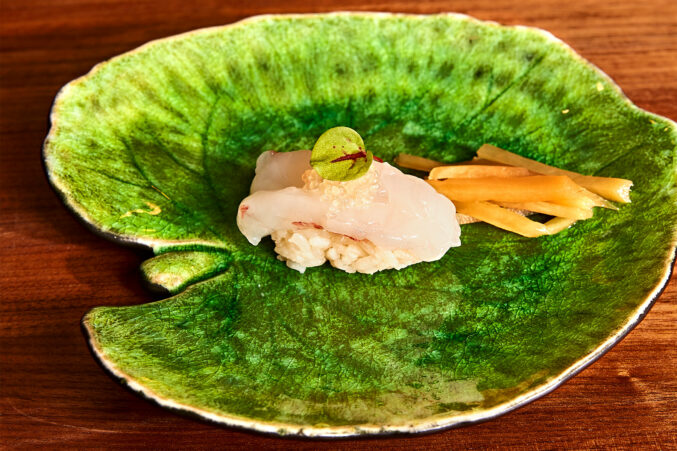 An omakase menu’s dazzling dance between classicism and updatings might include delicate fluke (hirame) topped with finger lime.
Brittany Conerly

The rice, first of all, speaks volumes, a premium tamanishiki short grain. It is the underpinning: pertly vinegared, each grain holds up its treasure. This is his preference, whether the bites are purist Edomae style—developed hundreds of years ago and named for the capital’s former appellation—or reach for ingredients outside the canon.

Initially, the old and new were separated into menus called “Edo” and “Sho.” The result for those partaking in the Edo was sometimes like hearing but not seeing fireworks in the distance. Given the melding of the two, Shoyo’s creativity finds fuller expression.

I have seldom eaten a dish so traditional in style in a tasting menu as a first course of ikura (salmon roe) that tops a mound of blanched spinach tossed with tofu cream, a fish chip, and sprinkled sesame seeds. I want to be able to make the tofu cream myself at home—umami, custardy, and divine.

Later, tempura-battered soft-shell crab meets sweet vinegar, braised daikon, and yuba (tofu skin). Cold, the tempura has succumbed to the soft, dull colors of fall, the marriage one of soothed creaminess and restraint.

Another bite brings sweet, creamy raw shrimp that fills your mouth with the pop of finger lime. Atop smoked Scottish salmon belly, Park perches an orb of deep-fried mozzarella and a dab of pesto.

In matters of nigiri, Park and Kondo do a dance between tradition and ingenuity. You’ll find fatty, garnet-toned toro, adorned only with sea salt flakes or fluke (hirame) with a pool of lemon juice on its firm, transparent flesh. On the other hand, surprises: tiny triangles of monkfish liver pâté set on fluke vibrate with a citrusy flash of ponzu. “Amazing!” the woman next to me says.

Another bite brings sweet, creamy raw shrimp that fills your mouth with the pop of finger lime. Atop smoked Scottish salmon belly, Park perches an orb of deep-fried mozzarella and a dab of pesto. (“Pesto?” the woman gasps. She has never had sushi like this, she whispers. No, surely not. Though she has been to Tokyo.) Over a scallop’s creamy flesh is spooned a salty-sweet caramelized miso. All is brilliantly twining. We bond over our shared gasps, our Mona Lisa smiles of pleasure.

And though I fleetingly wish the ice buckets and their 350-millileter bottles, nestled between us, were not the only source of sake, I am perfectly happy to have all this with a cup of hot matcha tea. (As we went to press, the promise was that they would offer sake by the glass. This seems fitting from a place that notices if you are left-handed and places pale, house-pickled ginger mounds on the correct side of a handmade oblong plate.)

Smooth hip hop crashes and pools, from a playlist Park devised when he was still dreaming about what Shoyo could be. Like the experience, it’s a roller coaster, but bewitching.

From the kitchen two cooks emerge, bearing perfect shrimp tempura—shattering, craggy, incomparably ethereal—over chilled soba. Another night, a miniature paella defies any notion of what paella might be and shows the duo’s remarkable dexterity: elements snuggled down in dark rice with marinated shiitake mushrooms and the pillowiest fish cake cubes I’ve ever eaten, like tiny marshmallows. There is also edamame and bits of seafood—purple-rimmed octopus, smoked salmon, shrimp. There are omelet strips and chili threads, radical red wisps. 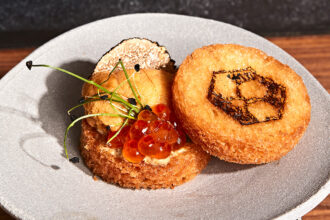 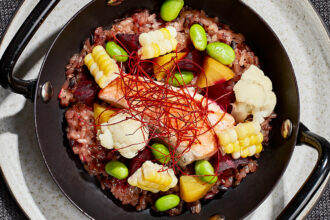 There are more—and more playful—gestures. Indeed, Japanese barracuda tempura with hot mustard aioli that burned my mouth and the eel “sandwich,” constructed on deep-fried, bite-size pieces of Texas toast that melt away on the tongue, are among the best and most surprising things I’ve eaten this year.

Between courses, I wonder what I will remember most. The wrists’ waltzes or each individual delicate composition. With an omakase menu, each course must sing, allow for a rise and fall in waves. Theirs is smart, respecting tradition and craft.

In the volley of final a la carte items (yes, for the die-hard), many of us pick the extraordinary uni toast, one of the more mind-altering mouthfuls you’ll have. It presents lobes of sea urchin; sweet, saline pools of ikura; and black truffle petals mounted on a round of Texas toast. It glitters like a ballerina twirling in a music box. The result is a close-your-eyes moment worth the price of admission, one that will haunt me for days. 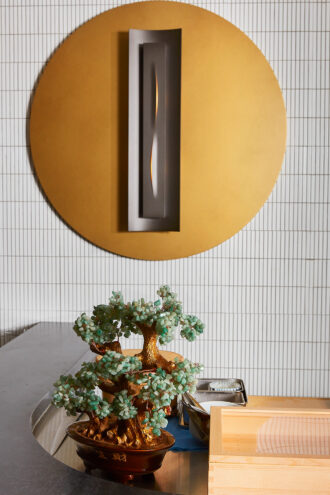 These are the last bites before a simple broth and a dessert, such as chewy, house-made mochi balls in a cold, sweet red bean soup, served in an elegant stemmed coupe. The only flashiness has been the gold leaf on the uni toast. Otherwise the goal is not to dazzle but to awaken.

Expectations rise, vaulting higher and higher as elite sushi culture evolves and high-end omakase counters such as Shoyo hone our notion of sushi.

“You are here for three days, and you came here?” Park asks diners visiting from L.A. on one of my visits. Yes. To this place with its gizzard shad with egg powder and its sweet miso caramel and paradigm-shifting uni on Texas toast.

The evening with the L.A. diners is the last service on a Saturday; the next seating will not be until Tuesday. As we prepare to rise and depart, we watch Park carefully assemble and pack into shallow containers the morsels of fish that will not see the morrow’s light. They are bento boxes, full of that glorious vinegared rice, for him, his chef, his wife. By the time we leave, they are jewel boxes that bristle with color.

Shoyo is for believers. Park later tells me he believes in his Higher Power. His wife has Shoyo’s logo tattooed on her rib. And us? Maybe we believe in a Higher Power, too, or at least we believe in Park. Because, from this shadowy den, he is putting omakase on Dallas’ map.

This story originally appeared in the November issue of D Magazine with the headline, “The Courses of True Love.” Write to [email protected].