1. “Dandy Don” Meredith was the first Dallas Cowboy, signed out of SMU in 1959 by Clint Murchison to a professional services contract before the team even had a nickname. The Cowboys shared the Cotton Bowl with the Dallas Texans, now the Kansas City Chiefs. The Cowboys went the entire 1960 season without a win, gaining their first victory in 1961 in the opener against the Pittsburgh Steelers.

2. On January 24, 1994, listeners were introduced to a new form of radio in 1310 The Ticket. But the first words spoken weren’t from Mike Rhyner or Greg Williams or George Dunham. Skip Bayless made the introduction to a radio format that has been copied across the country, part sports and part guy talk.

3. In 2014, UNT graduate and bobsledder Johnny Quinn gained worldwide fame at the 2014 Winter Olympics for punching through his bathroom door in the poorly constructed Olympic Village after the door became stuck.

4. In 1964, the Dallas Cowboys drafted gold-medal-winning sprinter “Bullet” Bob Hayes. The wide receiver went on to be enshrined in the Cowboys Ring of Honor (2001) and the Pro Football Hall of Fame (2009). Twenty years later, the team tried to re-create the magic by drafting Carl Lewis, who won four golds at the 1984 Summer Olympics. Lewis didn’t play football in college, but the Cowboys selected him with a 12th-round pick anyway. He never played for the Cowboys. (Lewis also never played for the Chicago Bulls, who drafted him that year as well.)

5. On October 19, 1925, the Wiley College Wildcats squared off against the Langston University Lions, a game that ended in a scoreless tie. It was the very first year of the State Fair Classic, the annual HBCU football rivalry game held at the Cotton Bowl. In the beginning, the State Fair Classic was held on “Negro Day,” a segregated event where Fair Park opened its grounds to Black visitors, and was played on Monday nights through the 1960s. Today, Grambling State plays Prairie View every year at the Cotton Bowl, though this year’s version was moved to AT&T Stadium due to the pandemic. 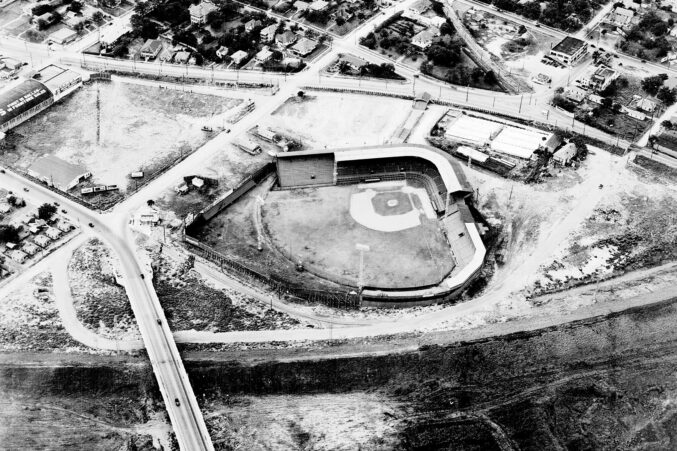 6. In 1940, Oak Cliff got its own home for minor league ball in the form of Burnett Field. The Dallas Rebels played on Rebel Field, which burned to the ground and was replaced with Burnett Field. The team was replaced with the Dallas Eagles. Dallas native Ernie Banks played in-town for the Dallas Black Giants in 1949 before leaving for the Kansas City Monarchs and then the Chicago Cubs.

7. Dirk Nowitzki was actually the third German player drafted by the Dallas Mavericks. The first two were Detlef Schrempf and Uwe Blab, who were both selected in the first round of the 1985 draft, along with Canadian center Bill Wennington.

8. Of all the legends to don a Dallas Cowboys jersey, none of their numbers have been retired. Tex Schramm came up with the idea to have a Ring of Honor instead of retiring numbers. At least officially. Nos. 8, 12, 22, and 74 have not been in circulation since being worn by Troy Aikman, Roger Staubach, Emmitt Smith, and Bob Lilly, respectively.

9. The night before Jerry Jones bought the Dallas Cowboys and replaced Tom Landry with Miami Hurricanes coach Jimmy Johnson, the two were photographed eating with their wives at Mia’s, on Lemmon Avenue, by a 24-year-old Dallas Morning News intern named J. Mark Kegans. The picture remains on the wall in the restaurant’s new location just down the street.

11. The Dallas Chaparrals, the first professional team in the city, were a charter member of the American Basketball Association and began playing in the 1967–68 season. They were coached by Hall of Famer Cliff Hagan, who also played forward. The team moved to San Antonio before the 1973–74 season, where it eventually became known as the Spurs and joined the NBA after the 1976 merger.

12. In 1965, four years after he got the first public tennis center built in the city, Dallas Tennis Association president Jack Turbin swooped in when a Mexico City operation that was supposed to host the Davis Cup didn’t have the funds. Turbin brought the tournament to Dallas, where Arthur Ashe won on the courts at the Samuell Grand Tennis Center.

13. The first draft pick in Dallas Mavericks history was Kiki Vandeweghe. He was taken with the No. 11 pick in the 1980 draft. He never signed with the team and was traded to the Denver Nuggets for a 1981 first-round pick (which became Rolando Blackman). He was booed thunderously and continuously every time he returned to play at Reunion Arena. Vandeweghe is currently the executive vice president for basketball operations at the NBA’s league office.

14. According to Forbes magazine, Dallas Cowboys owner Jerry Jones in 2020 passed banker and numbers theorist Andy Beal to become the richest man in Dallas. While Jones is valued at $8.4 billion to Beal’s $7.9 billion, Beal is also known for winning one of the largest single hands in poker history: $11.7 million in 2004 at the Bellagio Las Vegas.