After the Fatal Winter Storm, This Law Firm Wants to Hold the Utilities Accountable

Utility companies have long been protected from liability for blackouts. After February's deadly winter storm, a Dallas law firm hopes to finally hold them responsible.
By  Kathy Wise | May 17, 2021|9:06 am

“Dying of hypothermia in Houston” should be a meme illustrated by a comical photo of a guy in a shearling-lined winter coat shivering in an overly air-conditioned office building in the middle of August. Instead, during the statewide rolling blackouts caused by February’s crippling ice storm, it became a tragic reality as temperatures dropped to 2 degrees in Dallas (11 degrees in Houston) and outages stretched for days.

Pipes froze and people died. But a question has lingered: can anyone be held responsible? Historically, it has been near impossible to successfully sue an electric utility for damages due to blackouts. For starters, there’s the fine print. Most contracts for electrical service, called tariffs, include waivers of liability for disruptions caused by an “act of God.” The legal term is force majeure, a French phrase that literally means “greater force.” The Texas Public Utility Regulatory Act defines it to include such things as hurricanes, ice storms, natural disasters, acts of war, terrorism, or civil disturbance beyond the control of an electric utility. The theory is that you can’t predict nuclear war or extreme weather, and, even if you could, the cost of protecting against such unlikely events would make it too expensive to turn on the lights.

But what if you do have notice that it’s going to, say, get really cold? And what if you know, based on the last time it got really cold, that there are some relatively simple and inexpensive fixes, like having a space heater on hand for when a control panel starts to freeze up?

Bryan Fears, who co-founded the Dallas-based Fears Nachawati Law Firm, believes in that case, the electric utility has committed gross negligence and all bets are off. Days after the rolling blackouts finally ended, his firm filed its first lawsuit against the Electric Reliability Council of Texas (ERCOT) and CenterPoint Energy in Harris County. The suit was brought by the daughter of Doyle Austin, a 95-year-old grandfather who died of hypothermia in his Houston home after days without power.

A few weeks later, the firm added a claim on behalf of the families of three adults from Nacogdoches who died of carbon monoxide poisoning after a generator on their front porch vibrated its way over to the wall, where it proceeded to burn a hole and slowly fill the home with noxious gas, unbeknownst to the residents trying to keep warm inside. In March, the firm filed its first suit against Oncor in Dallas County on behalf of the family of Elzie Ford. Ford’s power went out on February 15, a Monday, and it was still out that Friday when his son was finally able to navigate the icy roads. He found his father on the floor, severely frostbitten, hypothermic, and suffering “catastrophic brain damage.” Ford died the following day after being airlifted to a hospital in Waco.

The stories are heartbreaking. But I was curious about the legal reasoning behind the lawsuits. So I got on a call with Fears and Patrick Luff, an attorney at his firm involved in the suits, to find out why they think they can win and what they hope to accomplish. 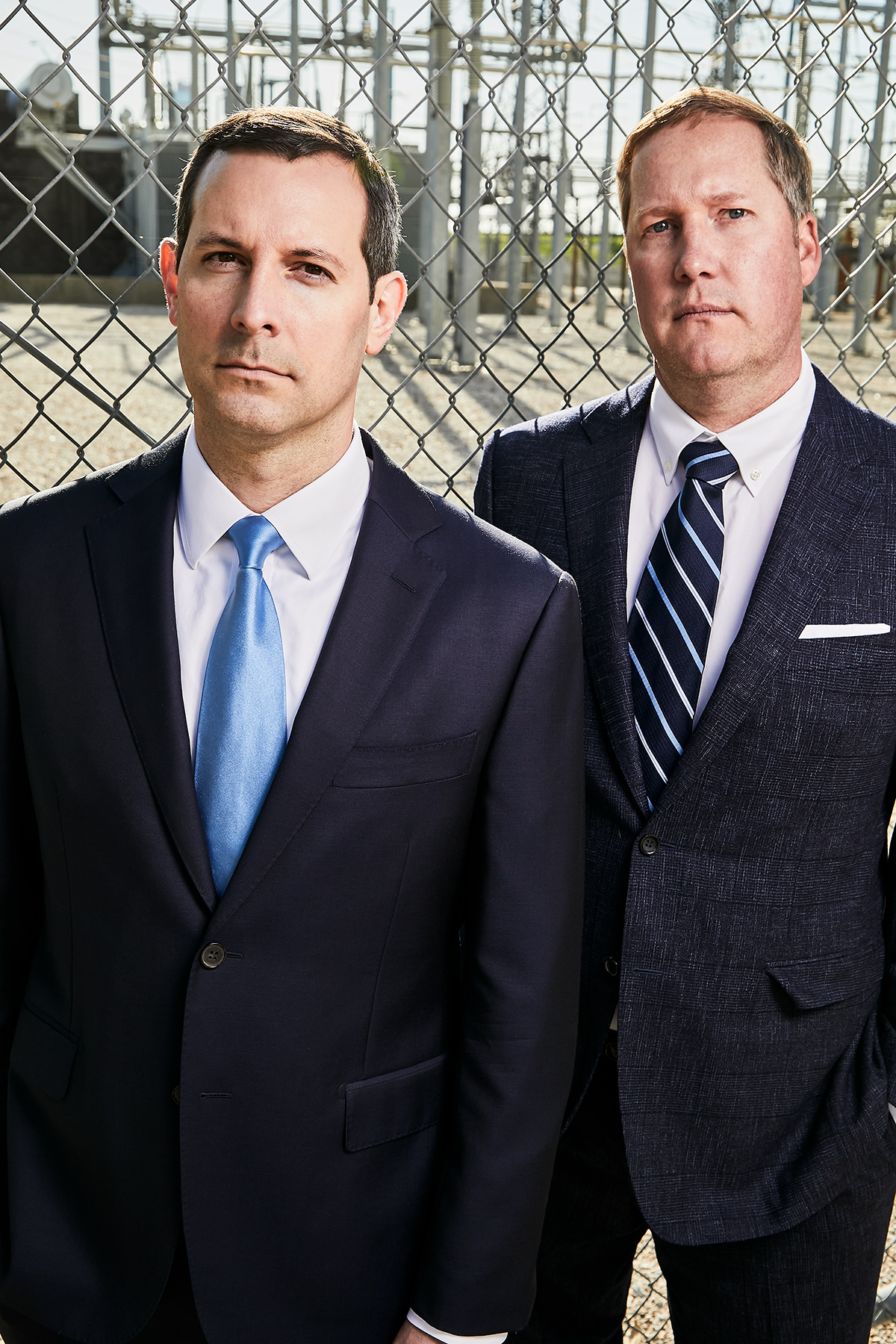 D Magazine: Am I wrong to think you guys have an uphill battle with these lawsuits?

D Magazine: I recently read an article published by Columbia Law School in 2020. It’s a mouthful: “Climate Risk in the Electricity Sector: Legal Obligations to Advance Climate Resilience Planning by Electric Utilities.” The article basically argues that because we know for a fact that climate change is creating more frequent and severe weather extremes, which are in turn creating new risks for electric systems, that electric utilities now have a legal duty to undertake what they term “proactive climate resilience planning.” Meaning, if you don’t plan for extreme heat and extreme cold and take steps to avoid foreseeable harm, you should be—and legally will be—on the hook for damages. Is that part of the reason why you believe it’s possible to establish liability in these cases against electric utilities now, when it’s been so hard to do so in the past?

Fears: After the 1989 storm and the 2011 storm, this was all foreseeable. Not only that, it was the fact that we knew the storm was coming, right? It wasn’t something that popped up out of the blue. We had prior notice from the other storms that we weren’t winterizing properly. What it comes down to is gross negligence.

Luff: I agree 100 percent. I think the suggestion that it was some unforeseeable act of God or force majeure flies in the face of the obvious facts. We know from the Public Utility Commission of Texas’ 1989 report, the Federal Energy Regulatory Commission’s 2011 report, and the half-dozen blackouts over the last 30 years caused by these very same problems that these problems were foreseeable and preventable.

“Some of the simple things they could have done, like space heaters on instrument panels—come on. It’s ridiculous.”

D Magazine: Why did you decide to sue ERCOT in the Harris County cases but Oncor in the Dallas County case?

Luff: I think what you’re seeing is that we have a variety of legal strategies that we’re bringing to bear. In the coming days we will be filing suits as well against the power generation companies, and likely after that, suits against the wellhead and midstream companies that actually supply the raw fuel for the generation process. We are investigating whether they actually had more distribution capacity than they used. That is to say, we are investigating whether there was an artificial price inflation by holding back some of the gas that was available for distribution to the power generation companies. That’s part and parcel with forced scarcity through negligence or intentional failure to winterize, in addition to the pure failure to release available supply as well.

D Magazine: Aside from claims of artificial price inflation, do you think the blackouts were a result of stupidity and poor planning or of financial incentives?

Fears: I think it’s 100 percent financial. Just looking at what we know and what we have at this point. These are all financial decisions that go into deciding whether to winterize. Some of the simple things they could have done, like space heaters on instrument panels—come on. It’s ridiculous what they didn’t do.

Luff: We represent individuals and family members who are harmed by profit-driven choices every day in our firm. And I think what we’re seeing goes beyond even that. There’s no doubt that a lot of this is profit driven. It’s about the lack of incentive to do anything because there’s no harm to their bottom line if they don’t. But I think it goes beyond even that to total lack of care, total lack of humanity. Because, as Bryan says, we know that some of these fixes were not particularly expensive. Generally we see that when you have not just a profit-driven decision but companies that are so out of touch with their responsibilities that they don’t even care to put in processes where the fixes are easy.

Fears: As far as the damage due to the blackouts, it’s north of $200 billion with 4 million or 5 million people affected. Hurricane Harvey was $125 billion.

D Magazine: I didn’t realize the figure was that high.

Fears: It’s almost twice as high as Harvey, which everyone still talks about. We represent close to 1,000 plaintiffs and are approaching 6,000 property damage cases, but we think those numbers are going to keep moving.

D Magazine: There’s an argument that individual customer agreements with providers like Oncor and CenterPoint absolve them of liability. And Dallas-based Panda Power has a pending lawsuit against ERCOT before the Texas Supreme Court on the issue of sovereign immunity, in which ERCOT is arguing that, even though it is a private entity, it should receive the same protections as a public entity because it operates like one. Are you concerned about any of these legal hurdles? [Note: the Texas Supreme Court punted the case for jurisdictional reasons after this interview, leaving the issue of sovereign immunity in dispute.]

Fears: I’ll give you my take real quick. I think, especially referring to ERCOT, depending on what’s convenient for them, they’ve taken a variety of legal positions in the past to suit their needs. So they’re talking out of both sides of their mouth when it comes to whether or not they can be held liable and face the music, so to speak.

Luff: And I think just to expand on that, I also heard some discussion about the transmission distribution utilities like Oncor, and I think you’re talking about the retail tariffs that are approved by the Public Utility Commission. There are a few things to bear in mind when you look at those. There is an open question at the very least when you look at the actual language of those tariffs about what sorts of activities do fall within those limitations of liability and which ones do not. I think there’s a second point about whether the limitations of liability can legally extend to third parties who are not customers themselves. And then, beyond that, I think in every single one of those tariffs, you will find that they do not protect the TDUs [transmission and delivery utilities] from liability for gross negligence. As Bryan mentioned earlier, when you have over 30 years of proof both of knowledge and of failure to act to prevent these sorts of disasters, that makes for a very simple case.

D Magazine: What do you hope to achieve with these lawsuits?

Fears: Change. We want change. Big picture, if we can make change with this, if we can have them take responsibility, have them winterize to the extent necessary, and  have them protect the citizens they serve, that would be huge for us. Obviously, there’s a monetary component to it also, but no amount of money is going to bring back our clients. No amount of money is going to solve the hurt and despair right now because of what happened. But change would be huge for us and our clients.

Luff: I couldn’t agree more. The reality of the legal system we have is that in these sorts of cases, justice means monetary compensation or monetary damages designed to deter future misconduct. But the reality is, it is very rare that I speak with a client who says, “I want to see you because I want money.” They tell me almost inevitably they want to bring a lawsuit because they want this to never happen to another family again.