The Anteroom is a sort of storefront for the Corsicana Artist and Writer Residency. It gives a glimpse of product, just like auto parts and furniture in the windows up and down six blocks of Beaton Street (which is, in this small town an hour south of Dallas, the main street, although the designated Main Street is one over). And I love the implication, all the clearer in the orderly reduction of a small downtown like this: serious art—no matter that to many passersby it may be puzzling—does, emphatically, belong here in the company of everyday essentials. That contention is essential to the Residency itself as, so unlikely to begin with, it prepares to extend its operations into other spaces, other storefronts—even a bookstore—on this downtown street and others.

So what’s going on? One hopes not what went on in Marfa, Texas, which the austere art of Donald Judd (and equally famous friends) has overwhelmed. One hopes this storefront sort of thing obtains engagement of the puzzled passerby. It’s just like auto parts. Sure, come on in and have a look around. And every month or two, as residencies end and the plague permits, come climb the perilous, slanty stairs to the upper floors of the 19th-century former Odd Fellows hall (across the street from the Anteroom) where all of this began, for wine and munchies and a broader glimpse of what improbable visitors from Iceland, Australia, Denmark, Germany, Great Britain, New York, Ecuador, and Dallas have been up to.

Everyone should come on down as well, of course, for famous fruitcake (you knew that); the glorious Wolf Brand Chili monument; the Petroleum Industry Park, whose creepy oilfield jail, alone, is worth the trip; the sense of small town on the prairie that so sweetly and contingently and artfully abides. But right now, the real draw is that storefront on Beaton Street.

• Jay Sullivan, the artist, is the former chairman of the Division of Arts at the Meadows School of Art at SMU.

• Sullivan’s “Architectures of the Body” will be on display in the Anteroom through summer.

•The Residency hosts seasonal dinners in a former Odd Fellows hall that was built in 1898. Visit 100westcorsicana.com to learn more and get on the email list.

Jay Sullivan’s current installation, “Architectures of the Body,” seems to glow there among the everyday essentials. So essential is its business. Jay—who’s chairman of the Residency’s board and former chairman of the Division of Art at the Meadows School of Arts at SMU—has been a teacher and a mentor to Kyle Hobratschk, the young artist who began, with Jay’s encouragement (“You owe yourself the chance to fail”), this whole shebang nine years ago. The Anteroom attaches to Kyle’s studio. Kyle’s studio attaches, in mysterious ways, to everything. It seems the perfect circumstance for this investigation into ultimate simplicities.

Although Jay finds immediate inspiration in the funerary customs of fourth-century Korea, such traditions are more ancient and extensive. All over Central Europe there are “urnfields,” cemeteries left by Bronze Age folk who burned their dead and buried them in pots. Quite nice clay pots. The kinds of pots you store things in, like grain or wine. This appeals in ways that other methods of disposal don’t. You figure what a pot contains may someday be recovered. “Architectures of the Body” takes advantage of this tiny space to bring ideas of space and death and body into volatile compression. In this little room, whole urnfields are implied. The sound of wind.

Right off the bat, it’s very beautiful. Not just in that perfected (and so frequently affected) sort of startlement that installations always seem to go for. But in the sense of beautiful as meaningful before the meaning’s known. One wants to know what this great, gray, cast—what? Aluminum? No, iron. It’s actually iron. It rings like iron. One wants to know what this great cast-iron bell-like vessel (cast right here in Corsicana, as it turns out) on its side, on the polished concrete floor, can mean. It seems to mean that one might enter—or at least imagine entering—that receptive opening flared with rounded lip. A child would waste no time at all. And something about the subtly anthropomorphic fullness of the shape—Claudette Colbert rolled up in a carpet. It receives us in some way.

Jay calls it Death Pot. And I’m thinking of the urnfields. And admiring how it’s made, the madeness of it—grainy surface with the casting lines revealing how such things, such heavy philosophical things, tend to assemble rather awkwardly. I recall a cast-iron, not quite life-size, seated, meditating Chinese monk. From the 15th century, I think. In the Crow Museum of Asian Art. Having lost its gessoed and painted overburden, it revealed its core—the patched-together sections, the essential stiffness, awkwardness—how holiness and wisdom, I suppose, must be assembled.

And then, offering a seat a little distance away, a thinly painted L-shaped yellow wooden bench. This, too, is beautiful. As clear as it can be, a brilliant, simple place to sit (and you’re invited to) to think about these heavy, gray ideas. The other heavy, gray idea across the room, called Urn, cast iron as well, presents a sort of dissection, or truncation, of the first, the fuller emptiness. It’s vertical and maybe half the nearly half-ton weight of the larger piece. And yet so lightly balanced—rounded base received by a small steel ring—as to make the cast-iron weight seem questionable. In support of which impression is the way the exterior surface ends abruptly at the truncation where the lip is cut straight off. There’s not that gentle continuity with the outside rolling over to invite you into the dark. The outside surface is even oxidized to compromise it slightly, to separate it and insist upon its thinness and, I want to say, suggest a certain thinness to the mass itself, the whole idea of mass. Which even physicists admit can be elusive.

All of which, I know, seems way too heavy a philosophical load to place on what are, after all, these very simple and industrial-looking objects. It’s the inflection, though, the adjustment to that heavy ordinariness—the slight reformulation of the stuff we thought we knew—that truly startles. And permits—when you bring such startlements, as here, into proximity—a critical discussion. In this case of nothing less than absence, presence, and the body. The uncertainty involved. It’s hard to know, just looking at the rolled-up carpet, if Claudette is really in there.

On the wall behind the Death Pot hangs a reference, I would say. Like what you’d find in the appendix of some arcane mathematical text on theoretical surfaces, topologies. It’s an etching on some sort of very thin and wrinkly paper that resembles thinnest vellum or the tissue of a napkin and suggests provisionality. A contour map—like the geographical kind, but more confused—of two interiors. One facing up, one down, like shells or cupped palms, meeting along a horizontal line compressed into what seems a sort of interference pattern. These interiors seem imponderable. The contour lines want rigor, but they overlap in ways they probably shouldn’t, can’t quite seem to find a system. Yet they’re beautiful. 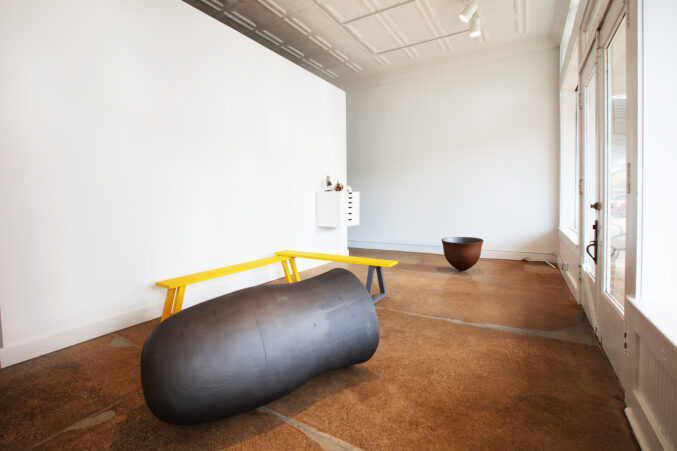 Across the room, another reference. This more like the physical kind you find in classrooms, public institutions to provide essential samples of materials under study. It’s a white wall-mounted cabinet with six drawers (floored in steel as dark as night) containing stuff. You think of stuff—well, this is stuff. Essential stuff. As might emerge from children’s pockets. Nothing cute. But honest-to-goodness stuff of which, I dare suggest, ideas are made. On top of the cabinet, there is stuff as well. Along with sculptural objects found or made, including one small mounted human torso made of straw and wire and plaster—barely recognizable, so uncertain of itself, of self in general, as I understand the earlier body of work to which it belongs.

But in the drawers (you’re allowed to look and even touch) you’ve got your rocks of various sizes; lumps of wood and lumps of metal; beautifully colored balls of string; a cotton-stuffed and sewn-together unidentifiable form; an empty ceramic shell that must have inspired the contour map; a fist-size, very heavy-looking metal polyhedron that, when lifted, truly startles with its weightlessness—just sheet brass soldered (messily but beautifully) together—and which speaks, as an empty massiveness, to the Death Pot’s massive emptiness; a rusty but unopened small tin can; another massive-looking, weightless polyhedron; larger colored balls of string; a slender stone of marvelous hue. It’s like a periodic table of the mind, the elements waiting to combine into some larger understanding.

And, again, it’s so important, this small space in this small town where the viewer gets to sit and join it. Where, it seems to me, the viewer on the bench completes a picture very like that one by Albrecht Dürer—his so famously mysterious engraving, Melancholia I, where the gloomy, seated angel appears to gaze beyond the marvelous allegorical-seeming objects staged about her (great, mysterious polyhedron there among them) into some dark understanding (maybe out there on the prairie) outside allegory’s reach.

This story originally ran in the June issue of D Magazine with the title “Big Ideas in a Small Town.” David Searcy and his wife, the artist Nancy Rebal, are among the founding members of the Corsicana Artist and Writer Residency. His new book-length essay, The Tiny Bee That Hovers at the Center of the World, will be published in July by Random House.