In this piece of microfiction, author Joe Milazzo explores the secrets of a family trade.
By Joe Milazzo | July 13, 2021|9:37 am

Those weren’t his last words, but that was the final lesson my father wished to impart to me before Alzheimer’s robbed him of his vocabulary. I was an old dog by then; he just didn’t recognize my wrinkles. He was still fixated on Lyle: my wayward uncle, his twin brother, and, if not his white whale, then the dead horse he flogged the hardest.

Lyle spent a good chunk of their boyhood at Scottish Rite. Polio stopped him in his tracks before he learned to crawl. Somehow he sidestepped the iron lung, but his thighs atrophied, and his left arm never beefed up. If they hadn’t grafted tissue from one of my father’s internal obliques, Lyle could never have snapped the fingers of his sinister hand. My father complained about constipation for the rest of his days.

Neither man lived to see the fracking boom, but I still sometimes have that nightmare where my father stands up in the courtroom and tells the judge he’ll serve Lyle’s time for him. Or the one where Your Honor splits the sentence between them like Solomon halving the baby. Or the one where they’re lying conjoined in their cell, reading the musty old comic books we used to keep at the cabin in Glen Rose, the top bunk thick with cobwebs.

Together, Lyle and Llewellyn—my father—made a tidy fortune trading Texana. Ranch histories printed in limited editions, bootleg “Yellow Rose of Texas” sheet music, issues of the Telegraph and Texas Register, daguerreotypes of derricks and railheads. If it happened here and someone took a notion to document it, you could find proof of it in Lyle and Llewellyn’s catalogs: mimeographed lists so exhaustive they became de facto encyclopedias. This was in the ’70s and ’80s, when provenance was a hot commodity and before the savings and loans followed oil into the crapper.

Their names confused a lot of the clientele. They were expecting a husband-and-wife team: Lyle and Lou Ellen. But then this pair of Colonel Mustards would turn up, mustaches like concentrated nicotine, the insides of their mouths too red when they guffawed (often), one furiously pushing a battered Everest & Jennings so he could outrace the other to the glad-hand. My father held up the mercantile end of the operation: a surgeon with his pencil. Lyle was a shark in tweed. He’d done all the studying. His antiquarian brethren envied his authentication prowess even as they condemned his prodigious appraisals.

Llewellyn was the chauvinist, the brother most proud of the family’s pedigree. Welsh: the last of the true Englishmen, therefore the first true gentlemen cattlemen. But it was Lyle who converted to the C of E. Maybe it was because their services were more like symphonies; everybody knew he was a closet maestro.

Lyle’s leaving the convention was the first falling out. My father never could puzzle out what had come over him. After they tacitly agreed to limit their fraternizing to phone calls, I played courier. (Lyle officed on Oak Lawn, next door to the Esquire Theater; Llewellyn, in the Quadrangle.) Sometimes, my father would lard the stacks of invoices I was to deliver with surreptitious proselytization: copies of “Are You Ready?” and Rev. Graham’s favorite Crusade Songs.

To this day, I absolutely believe Lyle’s reputation for finesse preceded him right into the jailhouse. Don’t get me wrong. Metaphorically speaking, his fingerprints were all over the forgery. John Neely Bryan never wrote an unsent letter to his former business associates explaining the true origins of the city moniker. Dallas’ founding father hadn’t made an eggcorn of daháw’, the word for “three” in the language spoken by the Caddo to whom he hoped to hawk buffalo hides.

Lyle didn’t protest his innocence. He only swore under oath that nobody had died. The Texas Rangers didn’t find anyone floating facedown in Lake Ray Hubbard with a bullet lodged in the back of their head. No car bombs had sheared off the portico of SMU’s Bridwell Library. But he still could not account for the $66,000 the Bryan holograph—phony down to its water damage—brought at auction. (The duped collector remains anonymous, but the item eventually made its way to the Smithsonian. I’ve paid my respects more than once.)

So they shipped Lyle off to La Tuna. He lasted eight months before pancreatitis and a bad liver sent him into hospice. He never came out, and my father never visited him. It wasn’t only that his brother was the most lost of all the souls he’d known. It was that he felt Lyle’s backsliding as a rent in his own soul.

The prison chaplain sprinkled Lyle with extreme unction instead of re-dunking him. My father reincorporated under a new name and pivoted to sports memorabilia. He more than scraped by, but he missed dealing with the mavericks and wildcatters who loved paper and ink as much as Lyle had.

I never got to tell my uncle how much his secret tutelage meant to me. My father thought I had a head for books, but his pride was too literal. Lyle, being the bachelor he was, always relished the nudge-nudge of a good double-entendre.

Poor Lyle. He’d shown me how to sniff out reconditioned leather, but he never suspected he’d taught me how to spot foxing. 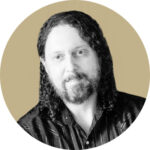 Joe Milazzo is the author of the novel Crepuscule W/ Nellie and two volumes of poetry: The Habiliments and Of All Places in This Place of All Places. He is an associate editor for Southwest Review and the founder and editor in chief of Surveyor Books. Joe was born and raised in East Dallas, where he still lives and works. His virtual location is joe-milazzo.com.