Author Kendra Infinite Allen explores what it's like to lose something as elemental as hair.
By Kendra Allen | July 14, 2021|11:26 am

Two of my children call me by my first name. At 8 and almost 12, to them I became Midday instead of Ma like I used to be. The other one—the oldest one, he don’t call at all. But when Almost blows up my brand-new kitchen, I think of him. I drive us to White Rock Lake because I don’t know what else to do besides remember how much he loved to sit out by the water; so I pick his siblings out a picnic table and get comfortable.

“Where we gone go?” Almost asks me with a sweaty nose, as if they weren’t the one who just blew up my brand-new kitchen in my brand-new house. I almost had a cure! is the explanation I’m given—for bald spots.

When we moved to Cedar Hill from around Glendale Park, Eight started to bald around her temple. Almost and I both noticed how light—how bare—she started to look around the edges, but she noticed after her school pictures came back. The next day, Eight made hundreds of prints in the school library, signed the back of one, and professed to the principal that yearbook photo requirements are propaganda for students to pick on other kids who are sick, that he’s directly responsible for bullying, and his hairline must’ve also swallowed his brain.

She was suspended for the rest of the week for the misuse of school property.

I don’t know where she learned the word propaganda from, but Eight is sure she is sick. Specifically, malignant tumor sick. She’s watched too many hospital shows and now no one can convince her differently, even when I tell her hair loss usually comes after the chemo she’s never had.

“Don’t ever think it keeps you safe, Midday,” she says to me the day after the photos are issued and a week before we no longer have a livable home.

“What about wisdom?” I wonder aloud with her, watching her take down every plait in her head.

“That either,” she responds, without even thinking about it. “If any of it is preventable … ”

“It’s not,” Almost cuts her off. They’re sure it’s alopecia. I’m sure it’s neither. But my assumption doesn’t explain all the loss.

“But if it is … ” Eight turns her octave up to 10. “I’d have it all back by now.” Which is what Almost tries to do, give it all back to her. I let them try, experiment, call it practice since Almost wants to be a scientist when they grow up. But I know getting it all back is never simple and never the same once had. Things never grow the same twice.

“You not sick, though.” Almost turns to me—not for reassurance—but to speak up. “Tell her she not sick, Midday.”

“She not sick, Midday,” I say, and Almost does that lip-smacking thing that, on impact, is kind of nostalgic; reminds me of my eldest who drifted into autonomy and never returned to family. I don’t punish it, his leaving. That’s what I raised him to do and why Eight and Almost are being raised the same exact way. I don’t fear their absence, but I do wish I could call him in this moment, too; that he could tell Eight she’s not sick. I just don’t know where he at. Eight tells Almost they can figure out how to bring back the extra layer—the itch—together. That the attempt, at least, is worthy of it.

“I told my friends we’d have it figured out over the weekend.” And I should’ve paid more attention to what figured out meant in my kid’s language. Almost turns their head so fast once it’s said aloud.

“Yeah.” She bends down to the floor where Almost is sitting, presses all her fingers around their head as if there’s nothing inside. “Monday is when I can go back to school. Duh. I need to show up with an indication that things are changing. That I’m getting better.”

“And if we don’t?” This response makes Eight smack her teeth.

“OK, well, I need more time.” Almost is also almost already the scientist they hope to become. Spends most times making the bedroom into a playground for mixing and the kitchen a place for boiling.

“You know,” I say to them both, “not having hair is OK.” But they try anyways. In an attempt to remove hair and replace it, our house comes down instead.

“I know,” she reassures them, with another dried-up, flaky, apparently flammable cure around the perimeter of her brain and across her forehead.

They don’t ask me anything, but I stand with them anyways, even if I don’t always understand the need to protect, to carry weight in a crisis that ain’t yours. “Y’all were really close this time, I know it,” is all I offer as I pack up the car with backpacks and trash bags.

and then we sit

and then we get quiet until I

hear a succession of claps.

“Midday!” It’s Almost. Sometimes they think they me when I get like this, all withdrawn. If they not claiming Eight as their own, they speaking over my thinking. “Where we gone go?”

There’s always too many people watching people at White Rock. Today we are both people.

“Somewhere,” I say. “Probably Morning’s house.” I dread having to call back home, but I pick up the phone anyways and grab at the pieces of hair left at the nape of my neck. 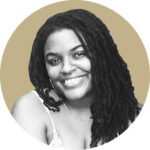 Kendra Infinite Allen is the author of the Iowa Prize for Literary Nonfiction-winning essay collection When You Learn the Alphabet and the poetry collection The Collection Plate, out July 6. Her work can be found on and in Repeller, Southwest Review, Frontier, The Rumpus, and more.