Author Sebastián H. Páramo contemplates if you can ever go back to your old life after you witness something that changes you.
By July 15, 2021|9:50 am

Bobby Jimenez lives in Dallas. An English teacher in his fifth year, Jimenez liked to stroll Greenville Avenue. Not far from his Lakewood apartment, he’d find himself at The Libertine—eating burgers, drinking mezcal, people watching. Sometimes he’d read a novel. Or he’d nestle in at Mudsmith—grading papers late into the evening because they served coffee late and the folks were interesting. Then Mudsmith closed. Now he goes to Buzzbrews. He drinks their unlimited pours and finds himself reminiscing, perhaps too often, about the sandy-haired woman who took him there last summer, giggling about the menu. Later, he found she’d since moved to Georgia to follow her passion. She’d already decided Dallas wasn’t for her.

Everyone was leaving. Places were closing and maybe Dallas was becoming dull for Jimenez. He needed a change of pace. Every summer, his Uncle Lalo would take his family to Mexico to visit family. Uncle Lalo insisted Jimenez house-sit his ranch home just outside Corsicana for the summer. He said it’d be good for him. The year before, trespassers had climbed over and stolen the plaster sculptures of Selena, a bald eagle, and a Texas star that he’d made. This year wouldn’t be a repeat with Jimenez there.

Jimenez came upon the ranch house after driving a long gravel road and a low-water crossing that went over a creek. He invited his old friends Benton and Natalie, who brought beers and mezcal. Soon it was dark and the fire was going pretty strong. Wood was plentiful. Benton passed a joint around. It’d been a long time since they could spitball about life’s phony demands.

After a while, they wandered toward the creek. The fire behind them, they began to hear faint music. Voices. The sounds seemed to be coming from beyond the cedars toward the fence line. Natalie joked about ghosts in the woods. Jimenez knew the woods were haunted by stories of Mexican lynchings. But instead, he wondered aloud if it was trespassers. Benton said he’d seen an abandoned oil well on the way over. He’d heard of one making terrible noises for several hours before exploding. Was it a rupture? Benton trailed off.

Their curiosity getting the better of them, they crept toward the fence several hundred yards away. As they came closer through the trees, they saw figures and another fire on the other side of the fence. Jimenez recognized the ranchero music. They saw three men singing, tipsy. One had an accordion, another a guitar, and another one was motioning them to join. They didn’t seem surprised by Jimenez and his friends’ appearance. There was carne asada on a comal over the fire, a night barbecue. They shared the bounty with Jimenez and his friends.

A handle of smooth tequila went around and soon everyone’s lips had kissed the bottle. His throat burning, Jimenez noticed how full, big, and bright the moon was that night. They learned the words to all the songs the men knew. The songs got sweeter, the laughter louder, and then slowly they all settled down—staring at the flames. Natalie stood up saying she heard music coming from deeper down the creek. It separated both properties. Everyone else heard it, too, and they all began walking deeper into the woods of the property. It was strange because the musicians said no one else was here. Closer to the bank, beyond the cedars, they saw another clearing, another fire raging.

None of them could believe what they saw: a fox dancing next to a coyote. The armadillo charming a snake. A raccoon playing a tambourine. Finally, a longhorn standing knee-deep in the creek, swaying next to Lalo’s sculptures. Selena’s silhouette. An eagle at her feet. A Texas star nearby. The musicians from before joined the raccoon, clapping along. Jimenez realized these animals must be the admirers of his uncle’s work. Benton and Natalie sat marveling at the fire and the sculptures. The moon was full and bright and everyone was dancing. Jimenez wondered if he should blow the whistle on these creatures.

Anyone else might say an eye for an eye, a tooth for a tooth, but Jimenez thought Lalo would get a kick out of finding where his lost sculptures went. Yet he never told his uncle. Jimenez himself couldn’t believe the story. Natalie and Benton found the secret thrilling and made the most of the music among the animals and musicians. Soon, the tambourine faded with the sunrise. Their new friends disappeared and only ashes remained. After that night, the rest of the summer passed uneventfully.

When Jimenez drove back to Dallas at summer’s end, he’d decided he was tired of feeling extinguished. The mystery of that night was a faucet. He began going to nightclubs in Deep Ellum—watching for women who swayed like the longhorn that night.

Through a bridal shop door that hid a speakeasy mezcal bar, Natalie and Benton found Jimenez asking about the cost of happiness and whether that night stayed with them. They said they loved him, but they were moving on. There were no more fires or sandy-haired women, but he could never forgive himself if he didn’t try to chase the mystery troubling his mind. He took a stroll toward Greenville Avenue and decided—if he must follow his passion, he must change his life.

It’s been a long time since he lit the world on fire. 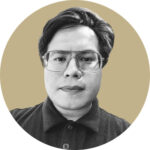 Sebastián H. Páramo is editor in chief of The Boiler, poetry editor of Deep Vellum Publishing, and a 2021 Dobie Paisano Fellow.