In this piece of microfiction, author Samantha Mabry pictures a short-term rental that has gone off the rails.
By Samantha Mabry | July 21, 2021|9:47 am

We are writing again about the home located at 18015 North S— Street, which is functioning as an illegal short-term rental property. Since our last letter, neighbors have witnessed another huge family reunion, two weddings, one particularly rowdy bachelorette party, and the filming of a country-western video.

But by far the most disruptive thing to ever happen at this property occurred just last Saturday night, when several neighbors woke to the sounds of glass breaking and multiple people shouting in a language someone later said might have been Russian. We called the police. One squad car appeared, followed shortly by three others. After that came the helicopters. Long into the night, the street was lit up blue and red, and the skies were blinking white. The kids were so worked up, it was nearly impossible to get them back to bed. We never got the entire story, but our courtesy patrol officer later told us there had been a stabbing at the house. A stabbing! The suspect had run away on foot and was never found. Who knows? He might still be lurking around the neighborhood somewhere. We would’ve thought, councilmember, that this incident would’ve been relayed to you by now, but apparently not. If it had, you would’ve understood our situation and would’ve reached out by now, surely.

There are other things: over the Fourth of July holiday, at least a dozen small flags had been ripped from lawns and pitched into the creek. Some unknown person is throwing pairs of shoes, tied together by their laces, into the trees in the beltway. A dead bird was found in a mailbox. A shovel was stolen from a porch. And while those things can’t entirely be attributed to the situation at 18015 North S— Street, all we can say is, none of this was happening before.

To be honest, we don’t know why, as a representative of this district, you haven’t responded to our past letters, but perhaps you’ll be pleased to know that we’ve started to take matters into our own hands. And maybe that’s what you’ve been hoping for all along. In addition to raising funds to increase the hours of the neighborhood patrol, we’ve made yard signs that openly express our displeasure. When we see a group pulling into the driveway and settling in for the weekend, we go out of our way to glare. We have started a Facebook page, where we share pictures with one another and document the various goings-on at the property. We have called the local news, more than once. We are serious about this. We want our safe and quiet neighborhood back.

We ask you this, again, Councilmember Liv—: how would you feel if strangers were perpetually moving in and out of the house across from your own, being disrespectful of the community, parking their cars in your driveway, damaging property, tossing empty beer cans into the backyards where your children play, and committing violent crimes? We doubt you would feel very safe. What if one of your neighbors decided to put out their bulky trash—most recently, multiple bags of lawn clippings, a stack of wooden pallets, a knot of garden hoses, a fake fig tree, and a tire—exactly two days after all the trucks came around to pick up? You probably wouldn’t like that. All we’re asking for is some assistance in enforcing a law that’s already in place. Put the pressure on! This property is illegal. The homeowners are not following the rules. It’s very frustrating when people don’t follow the rules.

Sincerely,
The members of the L— Neighborhood Association 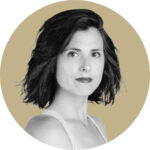 Samantha Mabry is a native of Dallas. She teaches English at SMU. Her novel All the Wind in the World was nominated for a National Book Award for Young People’s Literature, in 2017. Her most recent novel, Tigers, Not Daughters, was published in March.

Lick 'em before they melt.
By Catherine Downes
Arts District