Author LaToya Watkins tells a story about family fissures that can be suppressed but not forgotten.
By Latoya Watkins | July 19, 2021|9:50 am

My favorite uncle died with his eyes wide and his mouth forming an O, like he was seeing all the most frightening secrets of life and of hell. And he would’ve been alone if it wasn’t for his girlfriend, Puddin, who was sitting in the chair beside his sickbed, and there would’ve been no tears if it weren’t for hers.

Family legend had it that Uncle Gid was mean just like his granddaddy, who would bite and pinch children, who once tried to kill his wife with a hammer because she was late with his supper. All I know is Uncle Gid didn’t like many people, so, as a girl, I was always excited—honored—by how much he chose to love me.

But when he died, I hadn’t seen him in years. After his younger brother’s death in ’08, he became unhinged in ways that, for him, required the use of certain illegal medications. I didn’t want to know him that way. I wanted to remember him as the man who taught me to fish, who taught me to curse, who let me toast special occasions with wine, and who tried to kill the husband who had tried to kill me.

After Mama told me Uncle Gid was dying, I went to some East Garland address she had given me. Mama had said he was almost alone, except for Puddin. I wanted to get Uncle Gid out of there and I also wanted to put my hands on Puddin. To set her straight for attempting to usher my uncle into the next place in such an ugly way.

“Hey, Loreal,” Puddin said when I walked in. She bowed her head slightly and smiled, revealing missing front teeth. I snapped at her in return. Told her I’d heard about how she’d been treating my uncle. Stealing his money, pushing him down, making him sit in his own shit for days at a time. She eventually slinked away, went out the front door in a manner that let me know she wasn’t coming back until I was long gone.

Uncle Gid’s room was small and dark and smelled like feces and desire. Aside from that, it was tidy. I hadn’t prepared myself to see him like this. His eyebrows were burned away by chemo and he winced with every breath. And his weight. The full belly I remembered him carrying (my mama called it dangerous) had vanished. The packages and packages of adult diapers stored in plain sight throughout the room felt like an assault—like an outing of some kind. I sat down in a rusted folding chair.

“I miss Bachman Glen, Lolee,” he said after a while, using the pet name he’s had for me for as long as I can remember.

I smiled, recalling the countless weekends I spent at Uncle Gid’s apartment. The whole complex was fond of my Uncle Stevie, Uncle Gid’s younger brother. Uncle Stevie was generous and kind and people were drawn to him for it. They befriended—tolerated—Uncle Gid by extension, remembering all the while that he was liable to stab them if they said a wrong thing. When Uncle Stevie died, all those extensions went with him.

On those Saturdays, he’d get up early and say, “Let’s go fishing Bachman, Lolee.” He was always patient with me.

And I swallowed hard. I hadn’t seen or heard her name in years, but I would never forget her.

I nodded my head and closed my eyes, too. Sheila was not an attractive woman, but she did love my uncle. She never wanted anything for herself. It was always about my uncle. About me when I was there. She wanted a peaceful life with him, but she settled for what he gave her. Sitting there in that moment, it all came back to me. I could remember his foot on her neck. His hands wrapped around her throat. Her gasping for air and professing her love.

I could remember that weekend I stayed there and woke to the sound of her screaming, “Beat me like a dog, Gideon. Beat me if that how you got to love me.”

And later, after years with Sheila, there was the one with the Spanish accent. She loved him, too, but his hands found her neck and her face until she left in the night. And finally, there was Puddin, who I didn’t know much about. Just that she was an addict, too. I know my uncle. His hands had likely found her neck, too.

When I opened my eyes, I sighed. I loved him. Still. Always would. But there was something inside him that had reaped a certain thing. I stood up and stood over his bed, smiled down at him, and said, “I love you, Unc. Thank you for every good thing. You were always soft with me. I’ll never forget that part of you.”

I bent over and kissed his forehead before leaving the room. Found Puddin sitting in a plastic chair on the front porch.

Her eyes widened and watered at the same time. “I—I … ” she said, looking down at her hands.

Two days later, she sent me the text with the image of his eyes wide and his mouth forming that O, and I was glad that she was the one there to see it. 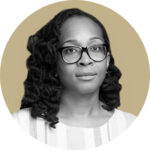 LaToya Watkins’ writing has appeared in A Public Space, The Sun, McSweeney’s Quarterly Concern, The Kenyon Review, The Pushcart Prize anthology, and elsewhere. She is a Kimbilio fiction fellow and has received support from the Bread Loaf Writers’ Conference, MacDowell, Yaddo, Hedgebrook, and Art Omi. She received a Ph.D. in aesthetic studies from UTD.

Lick 'em before they melt.
By Catherine Downes
Arts District