­—in the spring after the assassination—

Whoever had yanked up wall-to-wall carpeting had been in a hurry—dragged it right out the French doors and left it there, on the Mag Building’s vertiginous deck overlooking old hotel row, the Adolphus’ beaux-arts hat and silly turret. Left the doors blocked open by dense, hairy jute carpet pad piled onto the heap—ripped off of its tacks in the boardroom, the pad had left the floor tufted with furry hanks stuck down under a thousand tack heads. No furniture in the place. Bang in the middle of the skinny quartered-oak parquetry, an amorphous raw-umber stain lay stippled and blotched with black patches bleeding into the wood from the tacks, the iron having turned the oak black in the presence of moisture—the reaction in this case enhanced by ammonia compounds from a leaking corpse.

Lloyd sat, braced against the rusty door frame, used her feet to shove away a doubled-up corner of the previously foul, now vile, rained-on mass. Finally getting the doors closed, a half-hearted “Clement?” had a slight echo in the big room.

Intricate wrought brass grillwork locked her safely away from the open shaft. In this alcove, gilded Deco sconces stayed dark as she pushed wall switches; rolling back the second of the pair of mahogany doors helped some, though light from the veranda windows was beginning to fade. Hell’s with these people, she said aloud. OK, where’s the call button? I’m sorry, baby. And where in the flyin’ fuck did they hide the stairwell up here, please? Please? Behind a turnaround goddamn bookcase, for chrissakes? C’mon, where do you hide a stairwell?! Not so much as a fire escape! I’m sorry, baby—granted, it’s been closed off for a while but … OK what’s this and why’s it on the wrong side of the bars—it is just a doorbell, of course—don’t be stupid, it is not the elevator call button, and a doorbell won’t ring with the power off so here goes nothin’, right? Clement, she projected the thought, I am calling upon you down there in your elevator … Thus! Bing-bong, right, she said, bing-frickin-bong doorbell.

Punched the light switches again, rattled the handsome cage, yelled, “Dammit! Oh, c’mon!” A perfectly respectable shout, still it would’ve barely carried down the hoistway from here, a few steps away. She pitched a little lower, opened her throat, a fine contralto bellow, something she’d practiced since childhood, “Clement!” the entire lungful; another, “Hey, Clement!” her voice broke. 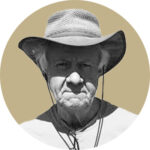 Tim Coursey has lived in Dallas since late 1948. He is a writer and avid tradesman. His first book for Deep Vellum will be released in summer 2022.