Dickie Watson looked like he was about to have a coronary. He stopped pedaling his exercise bike, chest heaving, and took a swig from a water bottle that I was pretty sure contained vodka, the way he grimaced when he swallowed.

Maybe he was just hungover. His skin, normally a shade of pink like a newborn pig, was pale and drawn, eyes bloodshot. Dickie was my age—early 40s—but based on his appearance he was pushing 60 in liver years.

“You want a cocktail?” He pointed to the wet bar.

We were in his corner office looking out over downtown Dallas. Dickie’s father occupied a larger space on the other side of the building, a fitting location for someone who’d just sold one of his oil companies for $200 million.

The mahogany-paneled walls matched the desk, the latter empty except for a pencil holder without any pencils. Not much work got done in this particular office.

He climbed off the bike. “Suit yourself.”

Dickie was my cousin. Our fathers had been brothers, sons of a wealthy self-made man. My dad had blown his trust fund on booze and drugs, an occupational hazard for offspring of rich people. Dickie’s father, a teetotaler like myself, had invested his money wisely, amassing a larger fortune, much to the delight of our grandfather.

“Why’d you call?” I asked warily. I was a private detective. Doing business with my family was best approached with caution.

“You ever heard of The Last Tango in Dallas?” he asked.

Dickie handed me a sheet of paper, letters cut from a magazine glued to the surface.

“An old VHS tape was delivered to my house yesterday,” he said. “This was with it.”

The page looked like a ransom note from an episode of The Rockford Files:

bring $2 million in cash to old red courthouse midnight friday or this gets emailed to the world.

He sighed. “It’s better if you see for yourself.”

Thirty minutes later, I met Dickie at his mansion, a ginormous structure that looked like an Italian villa, if by Italy you meant Vegas and by villa you meant brothel. His walk-in humidor was the size of my condo.

An old VHS player had been haphazardly connected to a screen in the den. He popped in a battered videotape and hit play.

After the girl-on-girl vignette atop the Grassy Knoll, I said, “What’s the point of all this, other than marveling at the grooming standards of the 1980s?”

It was hard to count the number of participants in the scene that followed, obviously filmed with hidden cameras, everyone groping and stroking each other in one undulating mass of flesh. Many of the faces seemed familiar, a who’s who of minor Dallas celebrities from a bygone era.

I squinted at the TV. “Is that who I think it is?”

“Uh-huh. You can see his Super Bowl ring in the next shot. But keep watching.”

A few moments later, I gulped, having no trouble recognizing the two men on screen.

Our grandfather next to the current governor of Texas, a stalwart churchgoer who’d just announced his intention to run for president.

They were engaged in some non-church-sanctioned activities with a young woman wearing nothing but hairspray.

“The money,” Dickie said. “We need you to make the drop-off.”

I rubbed my eyes, feeling weary all of a sudden.

Dickie stayed at home, mixing himself a drink, while I went next door to see our grandfather. He was in his study, a leather duffel bag at his feet. I hadn’t been alone with him in 20 years.

He nodded. “I spent at least this much making sure there weren’t any copies of that damn tape. Guess I missed one.”

I unzipped the duffel, saw the stacks of hundreds.

“Did I ever tell you I was sorry about your dad?” he asked.

My father died when I was in high school. Tough love, the family had called it. No more rehab or expensive hospital stays. Too bad about his failing health.

“Guess we coulda done more,” he said. “You know, to help with the situation.”

“Little late for that, don’t you think?”

He shrugged. “How’s the PI business?”

I picked up the duffel bag. We stared at each other for a few seconds, neither of us speaking.

“Where’d you find the tape?” he asked finally.

He licked his lips, clearly nervous. “This is the end, right?”

I chuckled and left. 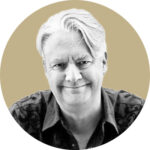 Harry Hunsicker is the former executive vice president of the Mystery Writers of America and the author of eight crime thrillers and numerous short stories. His work has been short-listed for both the Shamus and Thriller awards. Hunsicker lives in Dallas, a fourth generation native of the city.