“One who climbs a good tree always gets a push.” —Asante proverb

No one ever thanks you for asking them to step back. No one breaks into a smile at the words “Please don’t touch.” No one thinks they will, of course. And they think that right up until they poke a photograph or graze a painting or back into a sculpture and catch it with a bulky coat.

Winter is the worst—no one in Dallas ever gets used to trailing scarves. Or folks suddenly bend down to pick up an errant glove, quick as instinct and a hair’s-breadth from knocking over a pedestal. But at least people are covered in winter. In summer they are all skin: sweaty or dusty or sunscreen slicked, about to graze a glazing, toes tripping in the slap of flip-flops across the marble floor.

A friend from the Met has a cousin in Italy who says there’s a vase in the collection of a tiny museum out there. Or maybe there used to be a vase. Definitely there had been an argument between the staff of the tiny museum, years ago, and it escalated until one of them picked up the attendant’s stool in the corner and, in a rage, hurled it at the other. She saw how it could happen, not the utter mundanity of a boss you didn’t get on with, but the way it is possible, rather suddenly, to hit upon a breaking point you didn’t see coming. The stool missed its intended target and slammed into the vase. Half the vase shattered on impact, and the transfer of momentum launched the rest into thin air. The broken vase fell to the tile, where it broke again. The vase was restored eventually, and new staff hired immediately, and the cousin said the stool was put right back in the corner—only now with a card of text adhered to the underside, if you knew to flip it over and read, explaining exactly what had happened.

It was not unlike tending goal: you could be really good at your job and nothing would happen and no one would remark upon it. You could be really, really good at your job, but one freak thing got by you, one day the odds stacked up and your record was no longer intact—and maybe everyone understood the task was hard and the results eventually inevitable, or maybe the fans savaged you and you never played again.

This job cultures two species of anxiety. One has to do with people, the patrons distracted or rambunctious or about to misjudge exactly where they are in space. The other has to do with absence, the way an empty room is no respite. People you can be of service to; with a word, you can direct their motion and flow, cause them to divert or stop, the whole thing a kind of aerodynamics. To be alone, though, is only a heightening of potential energy—increasing, excruciating—before the kinetic that surely must come.

Imagine a museum on top of the museum, within it really, a museum that is all the air the room contains, all the space that isn’t the walls or the floors or the vitrines or the frames and the things in the frames, a museum you see with maybe a kind of heat map or X-ray vision or time-lapse film. Can’t explain it exactly, but you feel its every contour: a museum of the air vibrating, an exhibition of the constant tension and shake below the surface—too small and too much to see—just under the skin, all the way down to the buzz of electrons, the fundamental forces of attraction and repulsion and the fact that they aren’t exactly different things.

She tried to explain this once to a family about to crash into a sword ornament in the form of a lion. It didn’t go over well. They blinked at the intrusion, as if they’d been unceremoniously summoned back from Ghana, from mid-20th century, and were stunned by the rudeness and disorientation in equal measure. They did not fold her into their arms in gratitude, the way you would if someone pulled you back to the curb and out of the path of an oncoming bus. They did not even register the near miss.

A clock hand shuddered out of earshot and the supervisor leaned into the gallery, signaled to take a break. Another attendant took up the post next to the stool no one ever sat in. The family swiveled their stroller toward the East Wing.

A physics teacher will have told you once that the feel of your fingertips against your thumb, even of squeezing your fingers into a fist, is real, of course—all that pressure—but that there is always a space between, imperceptible. Collisions are a kind of illusion. Integrity a myth. Connection, well, it almost never happens. The universe operates generally on a policy of don’t touch; even solid things are mostly void if you get down to it. As a person so often overlooked, this is of comfort. 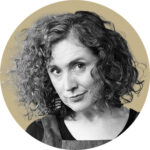 A. Kendra Greene is the author and illustrator of The Museum of Whales You Will Never See. Her writing also appears in The Guardian, The Wall Street Journal, and Atlas Obscura. Her zines are found locally in the White Rock Zine Machine, for 25 cents a pop.