People everywhere are ordering tamales. There is something magical about the smell that speaks of December. I stood in a commercial kitchen recently with Yesenia Lopez as she plucked tamales one by one with tongs from where they’d nested and steamed. As we’ve written before, Yes Yes Tamales is the brainchild of Yesenia Lopez, who is named after a ’70s Mexican soap opera character and is now, as of the pandemic, a 21st-century masa peddler. She makes them the way her mother taught her.

With a mother from Durango and a father from Zacatecas, a background in criminal justice, and a résumé that includes bartending and serving in fine-dining settings like The French Room, Bullion, and Mirador, Lopez saw her reality upended by the virus. Now she has become an emblem of the year of living indoors, when delivery became a necessity more than an occasional convenience. With her virtual text-to-order business, she has fashioned herself an artisan for our times. Lopez wants to be your modern tamale lady.

To order, send a DM on Instagram to @yesyestamales, text 662-4-YESYES, or visit yesyestamales.com.

Learn more about YesYes and Dallas’ tamale scene, right in time for the holidays.

But her tamales would work in any era. The bulk of the flavors—vegetarian queso fresco and poblano pepper; smooth, vegan black bean; guajillo- and garlic-mobbed pork; and a bright chile verde-enrobed shredded chicken—are simple and classic but also perfect, the flavors melding admirably.

Lopez began learning the craft from her mother at an early age. Lessons started with cleaning the husks and ended with learning to make the paste that gives the masa its gorgeous hue. In some of her tamales, the masa is tinted a subtle, blushing red from the purée of guajillo and Japones chiles she learned to make when she was 11. For the masa itself, which is fluffy and light, she doesn’t feel but rather listens as it slaps in the bowl to know when it is right. “Listen to it,” her mother would say. “Hear it.”

As for fillings, Lopez may add brisket—because, well, Texas—or, for a sweet twist, Abuelita chocolate or pineapple and coconut. She would also love to expand into Yucatecan-style tamales, steamed in a banana leaf. “Simple but still very tasty” is the core principle, she says.

Here, she shares one of her recipes with us. Make them and feel the love. 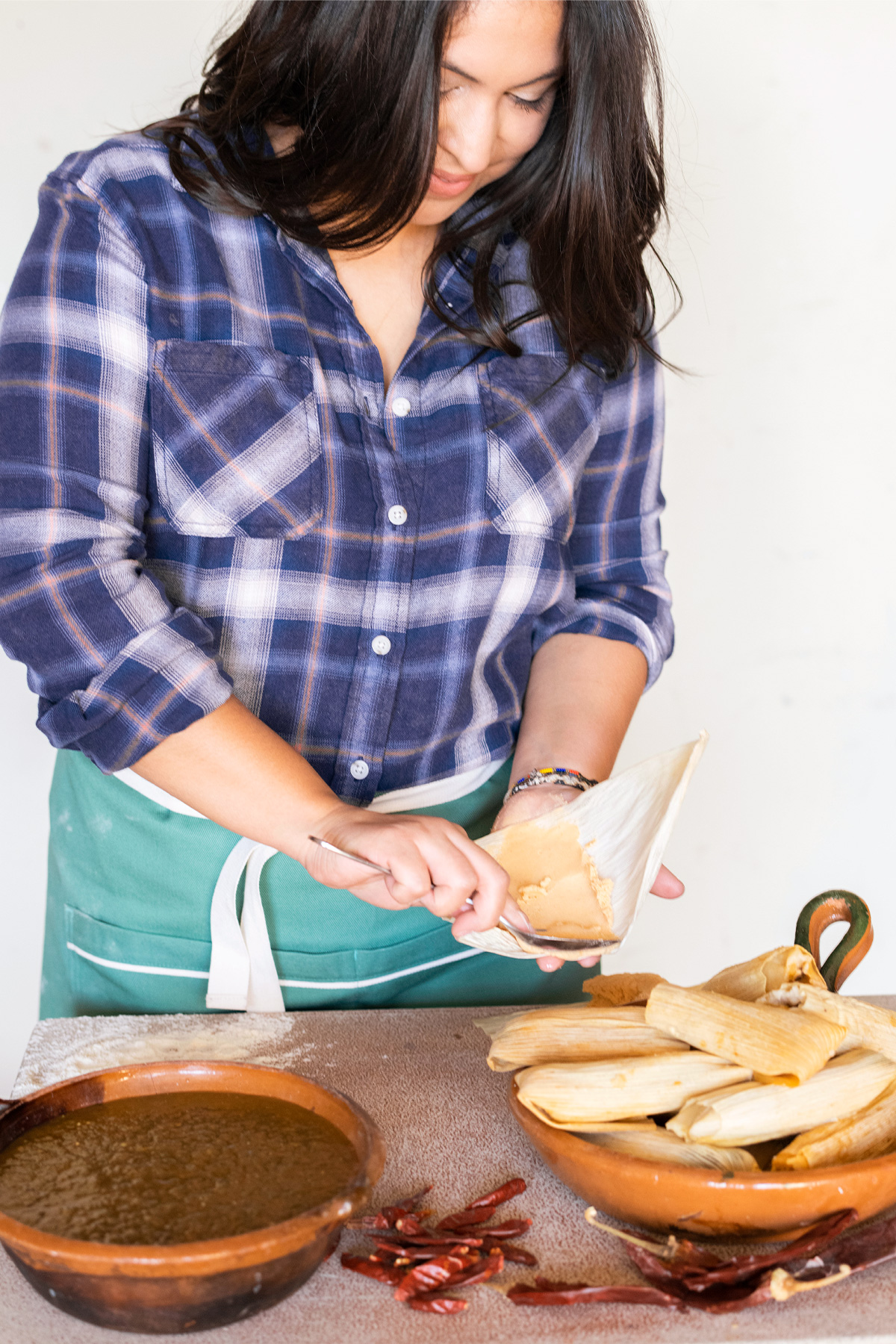 Text or send owner Yesenia Lopez a DM on Instagram, and a box cradling lovingly made, husk-wrapped parcels arrives at your door. They’re small packets with big flavors.
Elizabeth Lavin

Lopez is vegetarian, so her vegetable-centric tamales are simple but stunning. To yield a crispy, charred-husk exterior but retain a soft interior, she reheats the steamed tamales by toasting them in a skillet or baking them in the oven. She calls this secret to next-day tamales the Yes Yes way.

Instructions:
Pre-soak and wash corn husks with hot water. Place husks in a bowl with hot water covering the husks so that they are submerged for 30 minutes.

Cut the poblano peppers in half vertically, and remove seeds and stems. Toss the peppers in a little bit of vegetable oil and salt. Place peppers on a baking sheet and broil for 5–10 minutes until they are mildly charred with bubbles on the skin. Cover with aluminum foil or plastic wrap to allow peppers to sweat for 5–10 minutes. Peel the skins and cut the peppers into medium strips. Cut the queso fresco into similar-size strips.

Set a clean, damp corn husk on a clean surface with the wider part facing you. Starting from the midway point of the husk, spread a spoonful of masa with the back of the spoon, moving it toward you. (You want a nice, medium layer of masa on the husk—not too thick, but you should not be able to see through the masa.) Next, add peppers and cheese. (I usually use three strips of peppers and about one to two strips of cheese.) Roll the husk and fold in the pointy end to gently secure the bottom of the tamale. (Sealing the bottom will allow moisture, as well as your filling, to stay inside the husk.)

Bring water to a boil in steamer, then reduce heat to a simmer. Load in tamales. (I like to fill a steamer with a cross-shaped pattern and build up. Just make sure that the tamales are facing you with the open end up.) Cover and steam for an hour to 90 minutes, until the masa is fully cooked.

Options to reheat: steam for 10–15 minutes; microwave in a damp napkin for 2–3 minutes; toast in a skillet, turning every 2 minutes for about 10 minutes; or wrap in foil, place in an oven preheated to 325 degrees, and bake 10–15 minutes, until the corn husk is toasted and fragrant.