Dallas videographers Pockett Brown and Jirard, collectively known as The Digibees, have been shooting and editing live performances for Bruce Wood Dance Company since 2012. Well beyond that, the work of the husband-and-wife creative duo has spanned music videos, documentaries, and short films, always hovering around the realms of music and visual storytelling.

From the beginning, they were not interested in the generic. Jirard’s shooting style, which Brown edits, leans toward film noir and cinéma vérité, involving the camera almost as a character.

What they love are the shots they can sometimes capture of dancers from the wings, which make their archival work special. You see the breaths the dancers take before they step onto the stage, or you catch a glimpse of them as they run past in the darkness before the light hits them. These are the shots that give you chills, the kind that don’t always make it into final cuts. The kind that certainly aren’t visible in a stage performance.

Jirard and Brown first made their mark with music videos. Brown had wanted to make them from the time she was in a high school photography and videography class. “Music for me is my foundation first,” she says, citing her gospel recording artist mother and songwriter-photographer father. 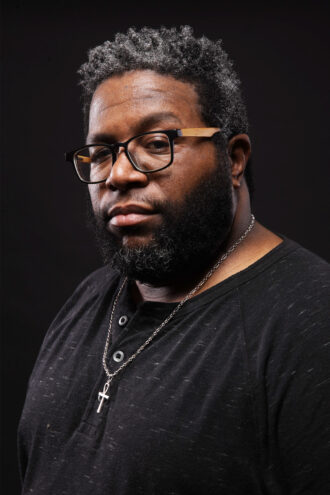 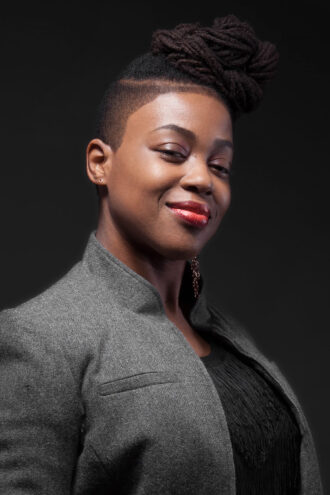 Courtesy of The Digibees
Step Up: Pockett Brown (right) met Jirard in 2000, when she auditioned to be the drummer in his band. Since then, they’ve collaborated on innovative music videos and short films, as well as documented the performances of the Bruce Wood Dance Company.

Jirard, initially a visual artist in pastel and pencil, attributes his sense of composition to the films he watched with his mother growing up, as well as early and ongoing exposure to his parents’ work. His father is a visual artist, and both his parents are photographers. Later he developed a keen interest in music.

They met in 2000. Brown, who’s from Flint, Michigan, was attending the Art Institute of Dallas on a competitive scholarship for video production. Jirard, who’s from Chicago, was already working locally as a singer and songwriter. When his band advertised a need for a drummer, Brown auditioned. From the first posters and music videos for their soul band gigging in Deep Ellum came The Digibees and an obsession with blending the arts.

For their latest project, the dance film Hope that they made for Bruce Wood Dance Company in December, they worked in record time to produce their most ambitious undertaking, shot in a few frenetic weeks. They pulled out every tool in the box to create a dance film that entailed six pieces in a 30-minute work, each shot in a different style with varying equipment and techniques. “There was no way we were gonna turn it down, even though it was crazy—six films in less than two months,” Brown says. “But it was so worth it.”

In terms of ongoing personal projects, Jirard has embarked on a two-part documentary series titled Colour Treatment that centers on the representation of Black people in film and television. One part will focus on the history and evolution of films about chattel slavery; the other will address the history of blackface. Brown is working on a soundscape of her life and a collaboration with Najeeb Sabour, an artist whom she met while working on Hope. In June, she became a certified music therapist with the goal of cultivating a body of work aimed at healing through sound meditation.

For all their projects, the driving question is the same: “Why can’t we do it in a different way?”

The Long and Short of It

You can find teasers and full-length works on The Digibees website. Here are a few items of note.

Circles: What Goes Around Comes Around: This dramatic short produced by Dallas-based TigerEye Films features an original score by soul figure and Booker T. Washington graduate Geno Young, who arranged and directed for Erykah Badu and produced tracks on her sophomore album, Mama’s Gun. The film was a 2013 official selection for the Pan African Film Festival and Urban Suburban Film Festival. Until it’s available to stream in full, you’ll have to settle for this teaser.