I sit solo at Meridian’s bar on a stormy evening, rain sluicing down the windows, and it seems as though we could be in the Amazon rainforest, plants over the windows accenting the dark wood. The illusion continues as I find myself eating a gossamer crudo, served in a beautiful shallow bowl, a perfect symphony of cured fluke, egg white aminos, and a bonito cream that lends extra depth. I’m in the right place. I’ve come, after all, to experience the fashioning of modern Brazilian cuisine.

You wend your way there improbably. Meridian is situated on the 300-acre compound of The Village Dallas. Not The Village you might remember from its days as a chill, college-like campus for casual apartment living, but a new Village, with a bustle of food amenities and underground parking and the cornhole games, volleyball nets, and movie screenings on lawns that spell suburban bliss.

The bubble might feel a little contrived, and it is. But dispel that notion as you walk into the low-slung, rectilinear restaurant that is the jewel of the place. There is nothing contrived about this. What you find in this magical cube of a restaurant is hard to wrap your arms around and at the same time simple: one of the city’s top chefs at the height of his game, cooking with his whole heart and all of his skill. A mature chef cooking in a way that’s far bigger than him and his taste memories. 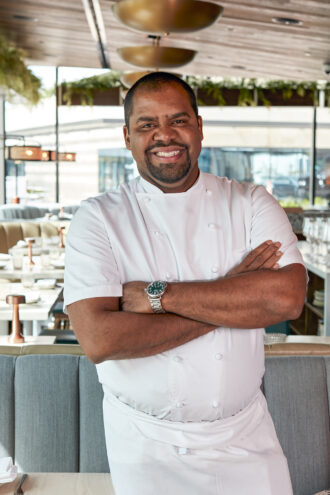 Junior Borges opened Uchi Dallas, worked at FT33, and helped conceptualize Mirador (and wrote the menu), along with overseeing other restaurants for Headington Companies. He bears resemblances to other Brazilian chefs, a wide-ranging cohort united by its desire to expose the country’s complex cuisine in the context of fine dining. With names like Manoella Buffara, Michelin-starred Alex Atala, and Rodrigo Oliveira, they illuminate indigenous ingredients and the country’s myriad culinary strands. But Borges is also doing his own thing.

Standing nightly at the pass, Borges has assembled the kind of envy-inducing collaborative team he wanted in New York, where he spent 13 years working his way up the line into the kitchens of icons like Diner, A Voce, and Colicchio & Sons, learning English, learning to be a chef. Alongside him in creative partnership is David Madrid, whose brilliance we saw in the breads he made under the name Wheat & Sour.

So the first thing is the bread course, an indicator of the finesse to come. Lacquered brioche or kamut fendu comes with paprika- and espelette-marbled butter with a layered effect of smokiness and spice; or whipped lardo with fennel seed (lovely, too); or, another night, smoky roasted tomato-laced ’nduja. The brioche is pull-apart, buttery, and incredibly fine, and each side dish turns a swish of flavor into a dainty work of art, with blossoms of purple-green microgreens on top.

It’s hard to say which is better, this or the skewered “beach cheese,” which is based on Borges’ memories of shuffling through blond sand. A little grill with a charcoal ember is set down with oregano and thyme plucked from the restaurant garden, their aromas delicately seasoning the air. Then you encounter the Brazilian coalho cheese on a stick, which is firm, rich, and sweet, like provolone or halloumi, and smeared with spicy honey. It’s not the wild, fermented honey of the Amazon, but it’s wonderful, and the theatricality is full of whimsy.

It’s important to scatter in these bar and beachside snacks; if you don’t, you’re missing Borges’ insistent and delicious message about ingredients not often enough celebrated. 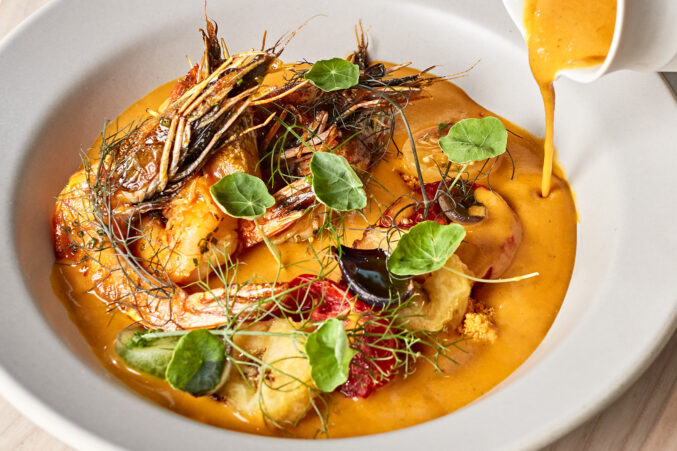 Another night you can dive in with Sungold tomatoes, bursting summer jewels in a bowl alongside Brazil’s Catupiry cheese, a creamy marvel, pebbled with nuts and seeds and fried sourdough (like croutons) that become more bewitching with every bite.

Of sausage and farofa, a common Brazilian dish, Borges makes something equally magical. The farofa (toasted cassava flour) looks like crumbly, loose grains. A confetti of extras—the bite of aromatic preserved peppers and pickled ramps—offsets the sausage, which is coiled, a spicy, coarse-ground linguica Calabresa with a bit of ramp green sauce for color and vibrancy. It’s a workhorse, nimbly transformed.

The beating heart is perhaps best felt in the moqueca that reminds him of his grandmother and her versions of the seafood stew. Bahia, in eastern Brazil, with its robust Afro-Brazilian population, is the region from which she hails, as does the coconut-imbued fisherman’s classic. Four big, rosy head-on prawns, beautifully grilled and full of garlicky flavor, bask in a beguiling broth with earthy sweetness and a color like liquid sun. Toasted tapioca flour gives it a surprising toothiness and rounds of hearth-grilled plantain and tomatoes break from the sauce that comes with a bowl of chive-flecked white rice.

Borges is a mature chef cooking in a way that’s far bigger than him and his taste memories.

It would be a straight line to end with the coconut yuca cake (also inspired by his grandmother), with texture from the freshly grated tuber that could have used more lift from lime jam and coconut ganache.

There are other paths. Say you began by nibbling wagyu beef tartare wrapped in a jagged shiso leaf, umami (dry-aged beef) upon umami (truffle XO) accented with umami (fried garlic). You will then find the Japanese-Brazilian diasporic culinary traditions thread through in the sumptuous whole octopus paired with field peas that had the same brightness. Its grill char is emphatic; the sauce is haunted by chiles, but also white soy.

But then the pastas. The fusilli with hunks of pork ragu and the saffron pasta with rock shrimp I could not get out of my head (since replaced by Aleppo pepper mafaldine, also with rock shrimp) harken to an Italian vein that also pulses through Brazil. 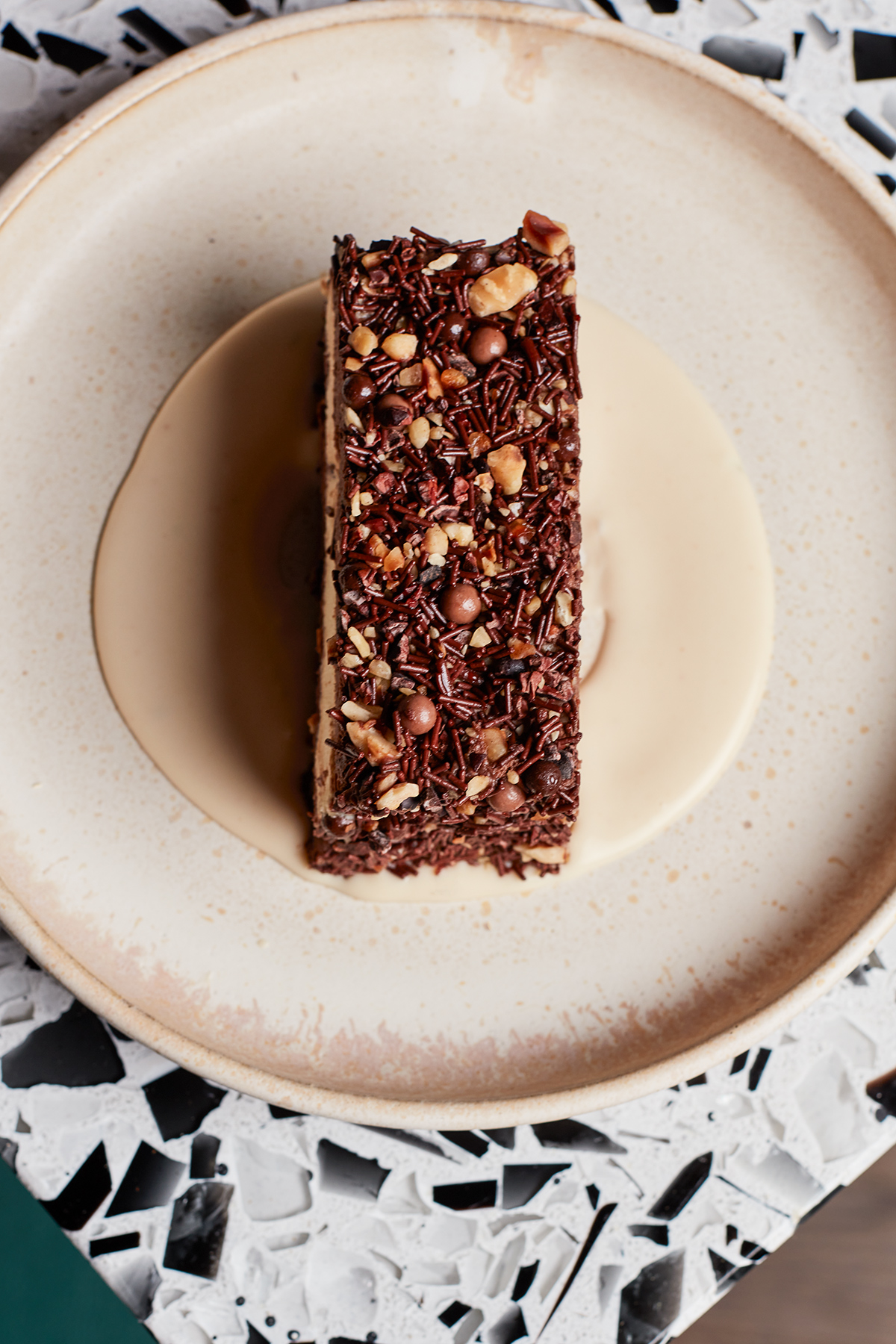 A creation by Madrid topped with house-made sprinkles and hazelnuts based on a brigadeiro, a truffle-like bonbon.
Brittany Conerly

Or you can go the Brazilian steakhouse route, as we did one night, seeking hearth-grilled meats. The picanha, the most prized Brazilian cut, is served plated, with an uncannily textured potato brick. The other option is an a la carte 32-ounce steak dry-aged somewhere between 45 and 60 days in the meat chamber you glimpse in the entryway. It all reads steakhouse, especially if you add a side of crispy potatoes on a bed of lime-bright aioli with gusts of dill pollen over the nuggets of gold—and maybe a glass of bold, tannic red. But the team is not interested in giving a stereotype to you straight. They are far more interested in nuance.

Borges twines all these strains with his experience of 20 years—the Italian simplicity of A Voce, French technique from FT33, Uchi’s Asian flavors. The elements weave into a tapestry in the same way Brazilian cuisine is a tapestry. And, I would argue, in the same way that we are now (finally) seeing and understanding American cuisine to be.

I think Madrid, who can break your heart with a sablé or coconut sorbet, is at his best when he, too, breaks out of a mold that can almost be too technically perfect. He has done that with the brigadeiro cake, layers of chocolate cake and mousse, that’s an homage to a ubiquitous truffle-like bonbon. Partway through, I realize that there is also a hazelnut praline that adds a sparkle of crunch to every bite. It’s brilliant, bringing a Brazilian birthday party to your plate. 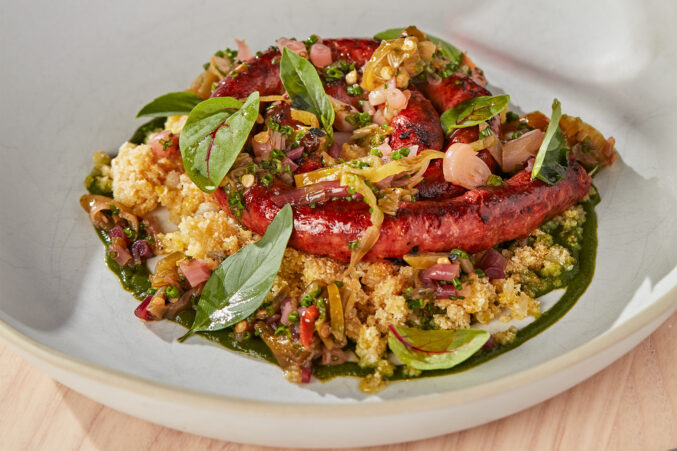 At the end of the evening when I dined alone, Borges lingered a moment after the rush of service. He spoke of his father, who would fish the Pantanal in western Brazil, the world’s largest tropical wetland, home to piranhas and anacondas. Of 15-hour road trips to Bahia and other trips to visit his grandmother in Rio. Of the simple tapioca-flour crèpes, beiju de tapioca, he grew up eating and now makes for his children.

It takes time for a chef to find his or her voice. With Borges, we knew it was coming, that he would finally speak in it clearly. Some restaurants with new cuisines are off on remote islands or at the ends of fjords. All Borges had to do was reach back to his Brazilian heritage. It’s our privilege to go there with him.

Write to [email protected]. This review first ran in the August issue of D Magazine with the headline, “Junior Borges’ Brazil.”