A gravestone in Corsicana’s Hebrew cemetery bears only two words: “ROPE WALKER.” For 137 years, no one knew who was buried beneath it.

I first saw the stone and heard its back story 15 years ago while researching the genealogy of a Texas family buried in the cemetery. I thought it was a gross injustice to the memory of the unknown man and to his family, who probably never learned what became of their father/husband/son/brother. I also viewed it as a thoroughly worthwhile challenge to see if I could discover his name. How I solved the mystery was not nearly as sensational as the mystery itself, a legend about a grave and its mouldering contents, a story seemingly straight out of the Brothers Grimm. 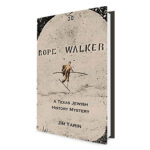 The nameless man was a one-legged Jewish tightrope walker, and for his last performance he had a stove strapped to his back. Corsicanans have repeated the story for generations. They call him Rope Walker, as if that were his name. The story goes like this: in 1884, a peg-legged man tried to carry a stove on his back as he walked across a rope stretched between two buildings, 30 feet above Beaton Street, Corsicana’s main commercial boulevard. He fell, and the stove landed on top of him. He asked for a Methodist preacher, and Abe Mulkey, a famous evangelist, prayed with him. Dr. Gulick, a town physician, attended to his injuries. Then, realizing he might die, the aerialist told those who’d come to his aid that he was not, in fact, Methodist; he was Jewish. There being no rabbi in Corsicana at the time, a Jewish merchant named Bernard Simon came to pray with him. The dying man refused to give his name or otherwise identify himself. Because he said he was Jewish and knew Hebrew prayers, he was buried in the town’s Jewish cemetery.

Those are the basic facts found in all major versions of the legend, including stories written in the 1950s and ’60s about the event by the noted Texas historian Frank X. Tolbert in the Dallas Morning News—although with each recounting, new and sometimes conflicting details would be added. To solve the mystery, I considered every detail and every supposed “fact.” Nothing was too trivial. In the end, only one piece of evidence, however, grounded the fantastic story in actual fact, and that is the gravestone itself, still there today, with its 10 solitary letters: ROPE WALKER.

The story first appeared in print in 1936, and again at least once every decade since. Despite “a search for his identity which gripped the community”—so says a Texas Historical Commission marker at the cemetery—no answer ever materialized. Theories were proffered over the years: he was a stove salesman drumming up business; it was a promotion for a store opening; he was a circus performer who had fallen on hard times.

I figured out who he was, and so I wanted to tell his story, to show how even the most intractable “brick wall,” as genealogists call dead ends in research, can be knocked down. I wanted to share the excitement of solving a historical mystery, and I wanted to let his descendants, if there were any, know what had happened to their unusual ancestor. A journey that started with a two-word epitaph ended five years later with an entire book, a historical exposition that is both simple and complex. Simple, in that it solves the Rope Walker mystery by finding his name and presenting his biography, telling what happened on what I eventually learned was a delightfully sunny Friday afternoon. Complex, because the truth that came out about the man and what happened to him in Corsicana provoked an examination of how historical facts are found and validated, raised difficult questions about the value of remembrance of the dead, and provided a reason to memorialize a once-thriving Texas Jewish community, hundreds strong, that is no more.

My approach to solving the Rope Walker mystery initially focused on researching Corsicana, its Jewish community, and the legend in its many variations. At one point, looking through old county records in Corsicana’s courthouse, I found a reference to the accident that gave a name to an injured man whose leg was amputated, describing him as an indigent person. How is it that the search that “gripped the community” had not found this? How is it that the town’s rabbis, educated men who undoubtedly knew about the Rope Walker gravestone, who might have felt some religious duty to discover his identity, had never figured it out?

I won’t go into specifics of what I discovered. I will say that he had gray eyes and substantial sideburns. As for the event itself, suffice to say that a ropewalking exhibition 30 feet above the street with no net and a stove strapped to one’s back should be attended by at least one magistrate, one surgeon, and one coroner.

I learned a lot about what it was like to be a Jew in Texas during the Gilded Age. Corsicana’s earliest Jewish settlers arrived in 1871, when the H&TC Railway extended its line through town on its way from Houston to Sherman, via Dallas. As the line reached each town, Jewish merchants set up shop. Most of the Jews who came to Corsicana at that time, or in the years soon after, stayed and were accepted as equals by their Christian neighbors. Texans in 1884 were judged on character, not characteristics.

Corsicana’s Jews were lauded as true Texans and true Americans, like Chief Rube Freedman, who was responsible for the erection of the firefighter statue in front of the courthouse; Louis Cerf, an Alsatian celebrated by the mayor as one of the county’s leading capitalists; Confederate veteran Max London, administrator of the Hebrew Cemetery when Rope Walker fell; and Adolph Zadek, a Republican assigned by the governor to ensure the fairness of elections during Reconstruction. A few of the brothers from the famous Sanger merchantry did business in Corsicana, but they didn’t stay. There were many Jewish merchants with stores on Beaton Street, and some buildings there still bear their names. I learned that the frontier Jewish community itself was diverse, with more than its fair share of stereotype busters, including gamblers, bilks, apostates, and, for good measure, a one-legged daredevil, a transient who remained for eternity.

If Rope Walker had died elsewhere, if he had fallen while crossing Elm Street in Dallas or at the Fort Worth Stockyards, maybe someone would have figured out his name, put it on his gravestone, and there would be no mysterious legend and no book. But he was killed in Corsicana. With everything I know about the town, it wouldn’t surprise me if instead of being named after the island of Corsica, as it says in the city’s origination story, it was actually supposed to be called Circusicana, given all its close ties to the circus. The first mud show to stop there, in 1857, was Robinson’s Menagerie and Circus, which promised, among other things, a “small specimen of the fair sex” weighing 600 pounds who could “dance as light as a feather.” The Ringling Brothers Circus helped to make DeLuxe-brand fruitcake, a product of Corsicana’s Collin Street Bakery, a national Christmastime favorite. And Black Diamond, a towering 9-ton Asian elephant, took the life of plantation owner Eva Donohoo on the streets of Corsicana during a circus parade.

After the Civil War, thousands of men with missing legs (and arms), like Rope Walker, unable to find decent work, resorted to hawking pencils, became organ grinders, or went into politics. Some simply tried to subsist on their meager pensions. Only one took to the high wire in a North Texas town to give people a thrill for loose change. For more than a century, he was an enigma, and now that I know his name, and a lot more, still, in the words of Herman Melville, “Dissect him how I may, then, I but go skin deep; I know him not, and never will.”

This story originally ran in the April issue of D Magazine with the title “The Mysterious Story of the One-Legged Jewish Rope Walker.” Write to [email protected].