Deep into the chaos of the pandemic—the point at which my wife and I stopped wearing clean clothes and responding to phone calls—we heard a chirping from a distant part of the house that we no longer visit because the walk doesn’t seem worth the effort. It was our 14-year-old daughter. Her name is not important, mostly because my wife wouldn’t agree to name her Jolly. Or maybe that was her older brother whom I wanted to name Jolly. These days, it’s hard to remember anything, even your children’s names.

Anyway. The chirping. Sometimes it was the daughter wanting to be fed. Those chirps we ignored, obviously. But some of the other chirps were plaintive requests for a cat. On and on they went. “Pleeeeaase, can we get a cat?” And “Pretty pleeeeaase, can we get a cat? I need something to snuggle and keep me company in my distant part of the house, the part you no longer visit because you think the walk isn’t worth the effort.”

Maybe she had a point. In this summer of the pandemic, as my wife and I struggled to do our jobs from home, we left the daughter to her own devices. Or should I say device? The daughter got so involved with her phone that I considered taking it from her and sitting it down on the couch and telling it that I own two shotguns.

A cat could be a good distraction from the phone. I admitted as much while raising one important objection: we have a dog. Her name is Katie Dog because my sister-in-law, also named Katie, found her on some sort of deep web rescue site and forced us to adopt her nine years ago, despite my protestations over Bitcoin transactions and dogs in general. She’s some kind of border collie mixed with something else. The dog, not the sister-in-law.

Two weeks of cat and then, when I was proven right about the non-simpatico nature of dogs and cats, no more cat.

“Listen, kid,” I told the daughter, “I know we try to avoid cliches in this house, but cliches exist for a reason. You ever heard the phrase ‘raining like cats and dogs’? Think about that. Rain. In our house.”

I was pretty delirious at that point. So I agreed to the cat—on a foster basis. Two weeks of cat and then, when I was proven right about the non-simpatico nature of dogs and cats, no more cat. (I am skipping the gerbil and chinchilla and guinea pig steps in this negotiation. You’re welcome.)

Thus was John Cat welcomed into our house. If the dog was named after the sister-in-law, then the cat, despite being female, should be named after the brother-in-law to maintain balance in the universe.

What can I tell you about John? She was young and gray and weighed a little over a pound when she joined us. She had a brown tuft of fur on her forehead, as if someone had spilled coffee on her. She liked to sleep on my chest, purring, or on a windowsill in my office. She and I spent a fair amount of time together, making magazines, with the door shut to keep out Katie Dog. There is something delightful about a cat sleeping on a windowsill while you work. When you are worried about a deadline and the death of our democracy, it’s soothing to turn your head away from your screens and see a curled-up, contented kitten, oblivious to all the world’s trouble.

But you knew I wouldn’t leave you with that reverie, didn’t you? John was also at times a straight-up hellcat on wheels (no disrespect to Dodge). She hated loose-leaf paper and would attack it without provocation. I have a lengthy lawsuit sitting on my floor, waiting for me to write about it in D Magazine. John shuffled its pages like a meth-addled Oklahoma blackjack dealer, an analogy that is admittedly unfair to Oklahoma and to meth users. John could not be corralled. Somewhere in the second week of residence in our house, she lost her mind. She attacked not only every piece of paper in my office but also the pull cords of my blinds, my fingers, my keyboard, and my HP Color LaserJet MFP M477fnw Printer, which might seem like an overly specific reference to include in this brief story, except that the HP Color LaserJet MFP M477fnw is a rather stout printer that only the most foolhardy kitten would attack. John managed to print several blank pages. Oh, also, she stepped in her own poop and tracked it across the bedspread on the bed that leads my wife to continue to mistakenly refer to my office as “the guest bedroom.”

Like I said, chaos. But it ultimately came down to the dog. Try as we might to introduce Katie to John and get them to not make rain, it just wouldn’t work. Katie did what you’d expect a dog to do: try to eat the cat. John did what you’d expect a cat to do: remain unconcerned and totally aloof until Katie made her move, at which point she tried to fight an animal that outweighs her by roughly the same amount as does an HP Color LaserJet MFP M477fnw. A detente could not be negotiated. 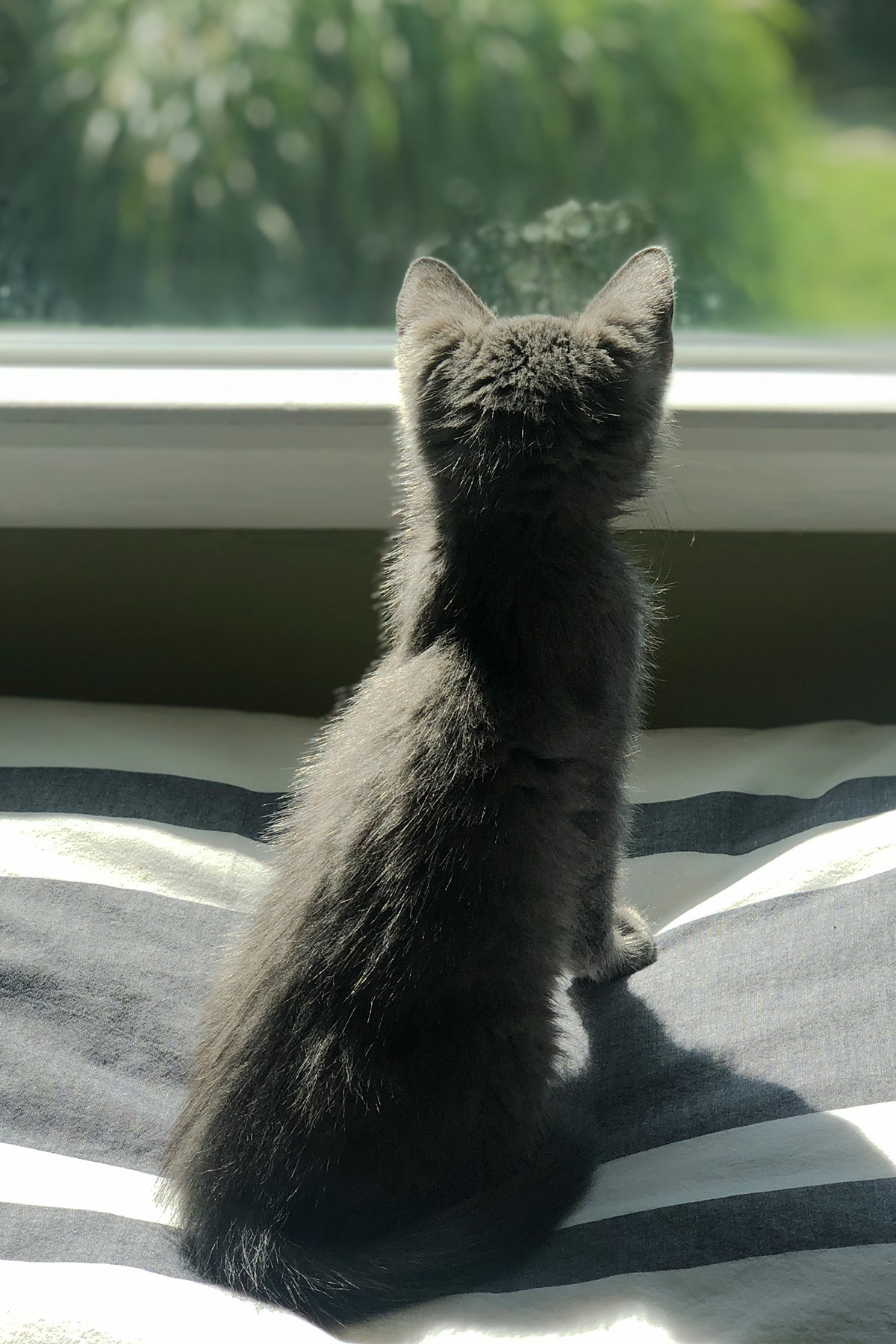 There are two reasons why I now hate John. First, her absence makes my heart hurt a bit. I’ve got too much to worry about right now. I don’t want to think about how John is faring. We returned her to a kind lady who rescues cats and finds forever homes for them. I have no reason to believe that John’s life is anything other than idyllic these many weeks later, but I remember her curled up on my chest, eyes closed, purring—just like I remember my own children when they were young and would still cuddle. Now my son is 2 inches taller than I am and living in another city while he finishes his senior year of college. My daughter has her uniform squared away for her freshman year of high school. But as I write this in early August, I know nothing but uncertainty for their near futures. So I don’t need to think about the cat, which I do every time I look at my windowsill.

The second reason I now hate John: we traded her in for a trampoline. I can’t explain the exchange rate, but that’s the way it happened. It became clear that the daughter couldn’t survive the pandemic without a trampoline, for reasons that are not clear to me. We now own a LONABR 12-Foot Combo Bounce Jump Trampoline, which arrived at our house only a few days after our iHealth No-Touch Forehead Thermometer. What is a combo bounce jump? I don’t know. What I do know is that our midcentury house doesn’t have a proper backyard, only what the daughter calls “a bunch of dirt and ferns.” So the trampoline occupies the entirety of our bricked patio, the one we used to sit on.

Will I ever combo bounce jump on this trampoline? Absolutely not. I forced the daughter to assemble it. After she finished the three-hour project, there remained approximately 48 unused washers. Her response when I asked about them: “What are washers good for? You don’t need them.” There is no way that thing is safe.

John, I hope you are reading this.