A car pulls into the circular drive in front of Knife at The Highland Dallas hotel, off Central Expressway and Mockingbird. It’s early April. Restaurants have been closed for more than two weeks. Masked, gloved, and carrying a Cryovacked parcel, John Tesar walks up to the driver’s side door, shows the slab of flesh he has been cradling—extraordinary marbling apparent through the vacuum-sealed plastic—and drops it in the open trunk before the car pulls out and purrs away. A last glance in the rearview mirror might reveal this chef standing alone in a fight for survival, every Cryovacked package holding the chaos of an uncertain universe at bay.

When the pandemic hit, Tesar found himself steward of a chamber full of meat. He had established himself as a wizard of dry-aging, practicing the dark arts of time and chemistry that he has taken years to master. He had three multimillion-dollar restaurants in the works—one in a sprawling Ritz-Carlton resort in Orlando, one a surf-and-turf concept in the bluff-topping Laguna Cliffs Marriott Resort & Spa in California, and one in a new Austin hotel.

Each restaurant opening was pushed back. Tesar was sitting on meat for all of them, in addition to meat for Knife Plano, which he owns, and the original Knife in The Highland, where he controls the product through a licensing agreement. Six figure’s worth of meat was either his or under his purview, and keeping it all rotating was an essential part of his curatorship.

The details of dry-aging are complex. In a temperature- and humidity-controlled chamber, the flesh decomposes on a precise schedule, enzymes and bacteria and fungi breaking down connective tissue, tenderizing the meat. The process creates nutty, pungent, complex, umami flavors. This is the funk that delivers shivers of pleasure. But too much time can mean too much funk for most consumers. Tesar knew he couldn’t reopen his restaurants and unleash 150- or 240-day dry-aged steaks on most of his returning diners. And so the enormous dilemma: he had racks full of meat that needed to be replenished, rotated, and sold.

“I was in a state of panic that day,” he says. With two young children, stripped of his livelihood, Tesar wondered if he would have to borrow money. He began to call friends. On what he dubs “the night I was about to jump off my balcony,” he received a call from Jason Schimmels, his purveyor from 44 Farms, a boutique ranch in Central Texas, but also his friend.

Had he heard? In Houston, Chris Shepherd, another ambassador of small ranchers, was in the same position, and he had turned his steakhouse, Georgia James, into a curbside butcher shop, selling every cut on the menu, and he sold out in a single day. The pace had not slowed.

Still shaken and distraught, Tesar turned to Instagram, listing available cuts with photos, not knowing what to expect. He says, “My phone blew up like you wouldn’t believe.” 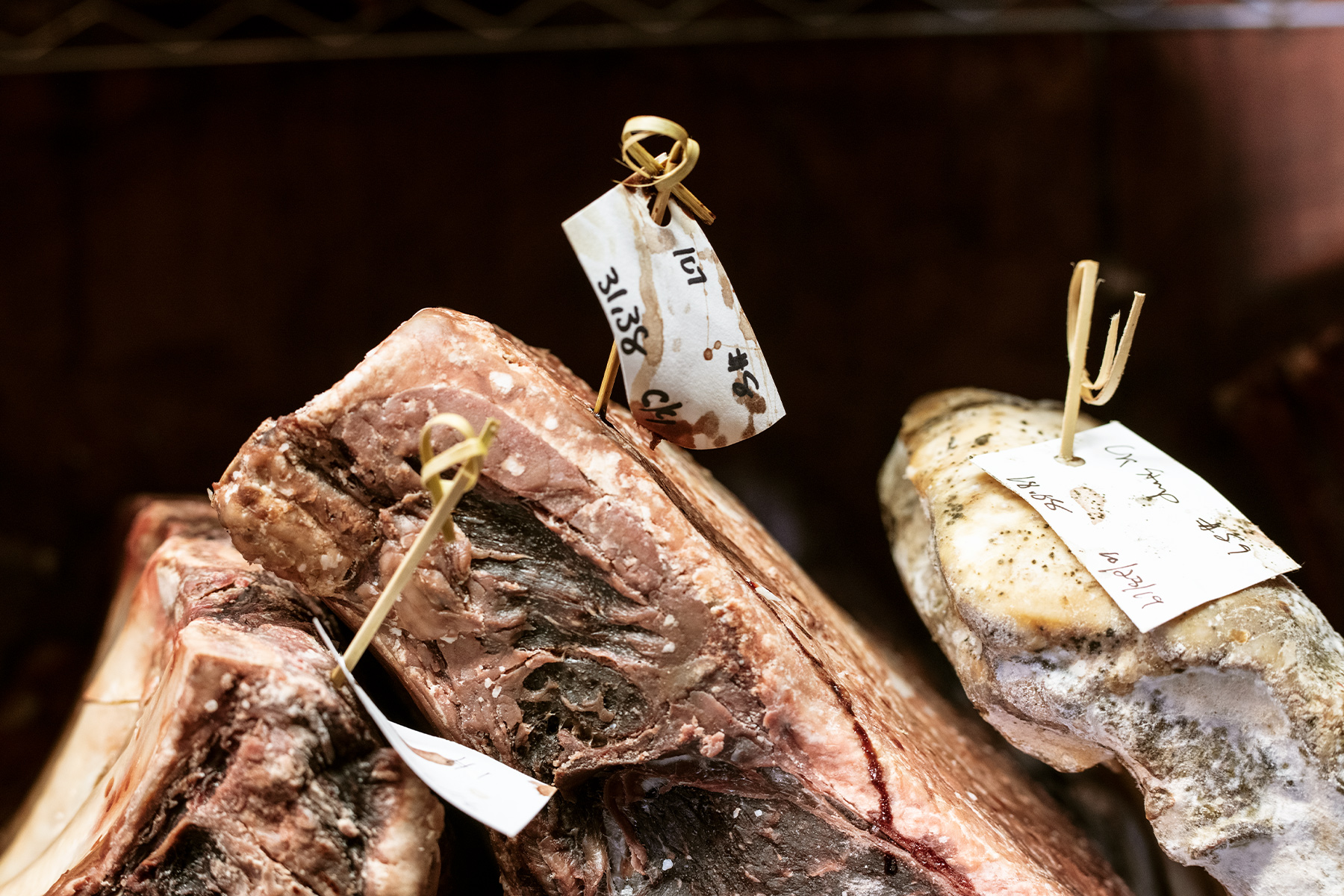 In John Tesar’s aging chamber at Knife in The Highland Dallas hotel, tags document the age of inventory. Once they reach maturity, shaggy carcasses are cut into rib-eyes, filets, and New York strips that Tesar loads into customers’ trunks.
Elizabeth Lavin

The names and orders came in a barrage, which he transcribed by hand. He copied and pasted pickup instructions into text messages, so that when buyers pulled up, he dropped the cuts in their trunks, trusting that they had transferred money through Zelle or placed the cash in an envelope tucked away in the trunk. Sometimes an order had been misplaced and had to be cut on the fly.

“I would stay there all night if I had to,” Tesar says.

Customers, meanwhile, would high-tail it home as fast as they could to the safeguard of freezer or fridge, sometimes dividing a $500 or $1,000 order among several friends.

Tesar sold to Texas Monthly’s Dallas-based barbecue editor, Daniel Vaughn, who ordered a 240-day dry-aged rib-eye and posted about it on social media. Suddenly the whole elite barbecue world was alight with desire for the cut Tesar had priced at $150 to ensure it wasn’t going to amateurs. “Like, every barbecue follower in the world the next week ordered 240s,” Tesar says.

Masked and cautious, he drove to the FedEx near Addison Airport on Friday nights because he knew the location was uncrowded, and he would leave the door propped open as he carried in orders. He was sending steaks biweekly to Hawaii, where Dave Grohl of the Foo Fighters has a home on the Big Island, and he sent dry-aged behemoths to Florida, where food writers were gearing up for the planned resort opening.

Friends received shipments, as did a crowd he calls “philanthropists,” who were buying 12 steaks at a time. They would tell him, “We’ve met you, we like you, and we want to make sure you’re around when this is over.”

“I was in a state of panic that day,” he says. With two young children, stripped of his livelihood, Tesar wondered if he would have to borrow money. He began to call friends.

For the most part, though, the system ran on pickup orders. Word got out on social media, and by week two, he was selling hundreds of steaks a week as people of all kinds became part of this strange, masked, film-noir operation.

I spoke with Jon Griffiths, lead sushi chef at Uchi and former line cook at Knife, who bought six steaks—60- and 90-day dry-aged rib-eyes and sirloins—and dabbled with sous vide and reverse sear for date nights.

I spoke with a man named Mike Snyder, who knows Tesar from a shared boyhood on Long Island. He bought 45-day dry-aged rib-eyes, and, while he had been instructed not to set the combustibly marbled meat over an open flame, he disobeyed and was nearly engulfed by a conflagration on his grill. He was one who had gone in on shared orders. “When I went to pick up the first $500 order,” he says, “it felt like a drug deal.”

I spoke with Julio Rivera, aka DJ Souljah, who has worked with Tesar at music and food events. During online sets, he would break in to do commercials for Tesar. Souljah was cooking rib-eyes and New York strips.

On a trip back to Dallas to pick up a car, Ben Smithee, who moved to Manhattan five years ago, also picked up steaks—two 30-ounce rib-eyes and two filets, tossing them in an ice chest and hauling them back to the Lower East Side, where, in the midst of failing supply chains, he threw them into a cast-iron skillet and feasted.

And I learned of Francisco Rocha, an Argentine who talked about pulling out all the flavors of the steaks he was grilling at different temperatures and using different methods, letting the nuances of the dry-aging express themselves. He compared Tesar’s steak—fat content, size, color, tenderness—with one he bought for almost as much at Central Market. It offered no comparison.

Even as they sent me photos of their flaming grills or of their side-by-side comparisons or talked about the luxury of 2.5-inch-thick cuts, they also spoke of a desire to help, to participate in a food chain in a more direct and intimate way. They understood, though perhaps only peripherally, that the meat industry was in dire straits. They had seen the price of ground beef jump to $7 and then $9 a pound. They knew they were seeing the flaws of a system writ large, and they feared the specter of a world with only “big guys.”

44 Farms has been lucky. It benefits from a close relationship with chefs like Tesar and Shepherd, who have been buying whole steers and selling offcuts for years. But elsewhere, the devastation of closed dining rooms was matched by desperation in the pasture.

Across the country, cattle were left standing on lots, unneeded, some ultimately euthanized, as distributors shut off the taps or restricted orders to specific cuts. Processing plants became touchpoints for the virus, creating bottlenecks as they shut down. Retailers turned down all but a few cuts—rounds, chucks, ground beef, briskets—and ranchers found themselves grinding rib-eyes, tenderloins, and strips. “If you can’t sell the middles, you gotta make up for that loss,” Schimmels says. 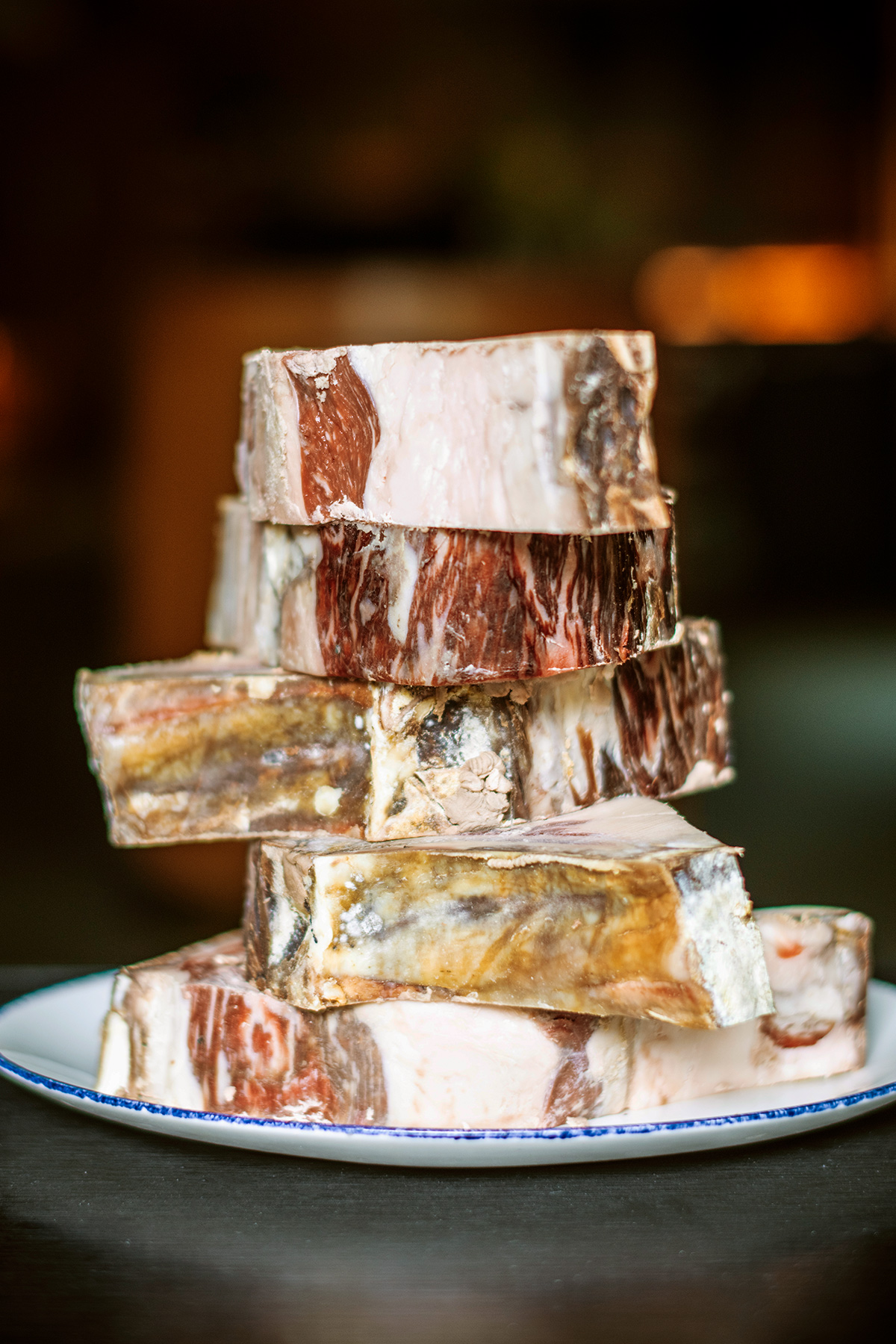 All the Marbles: The dry-aged meat is funky and pungent, with a nutty, complex aroma that wet-aged steaks simply don’t have.
Elizabeth Lavin

The bigger problem, he says, will come later. He estimates we won’t know the effects of the pandemic on the cattle industry for another 30 months, the full cycle of a head of beef. So the future is unclear. No crystal ball exists to tell us what food supply chains might look like. Tesar intends to continue selling meat directly to consumers, as does Shepherd. “We’ll keep the butcher shop open forever,” Shepherd says.

Meanwhile, people like those who have gotten a taste of what it’s like to buy dry-aged steak from an artisan maintain hope that perhaps a smaller economy, which formed and intensified for a few weeks when we sheltered in place, might not vanish. They hope that these surreal events might be part of a larger systemic moment of consciousness-raising that lasts beyond the finding of a vaccine. That this moment may reveal not only the flaws in a system, but also a new way forward. Perhaps, they admit, they should have been doing this all along.

For Tesar, something else has become clear. He needed these people. At a low point in his life, he needed them like he hadn’t needed them before. He sent out a call for help, and they responded, eagerly popping open their trunks and paying cash for the privilege of carting off his steaks.

“It was fate,” Tesar says. “It literally saved my life.”