My quest to Texas Wine Country started with a winemaker from Long Island. Regan Meador from Southold Farm + Cellar had moved back to his native state to craft natural wines, and I was excited. I had watched the Texas scene evolve, and I knew Meador’s lissom wine was just the beginning. Soon enough we would have more fizzy pét-nats to sip on patios, yes. But new winemaking experiences, influences, and methods were already in the works. So when, in response to my interview request, Meador asked, “Can we do it in person?” it was just the nudge I needed to plan a three-day gravel-churning adventure to explore the new Hill Country scene and report back. Which is how I happened to descend on its winemakers in the middle of the August harvest season in the midst of a pandemic.

I know wine. By trade, I’m a dining critic. By birth, I’m half French. I grew up in France, with a grandmother who had a house in the Loire Valley, near Sancerre, and when I moved to Texas 10 years ago, it was from the Bay Area. When I came to Dallas, I sought to understand our wine landscape. What I found was still emerging. Now I wanted to see what had come to fruition.

My plan was to avoid hotels and to camp, but all the state parks were full. So I decided to stake my tent at Krause Springs, where reservations aren’t needed because there’s always room for a tent in this gorgeous natural spring oasis about 35 minutes outside of Johnson City, at one end of Highway 290, which serves as the wineries’ main drag. 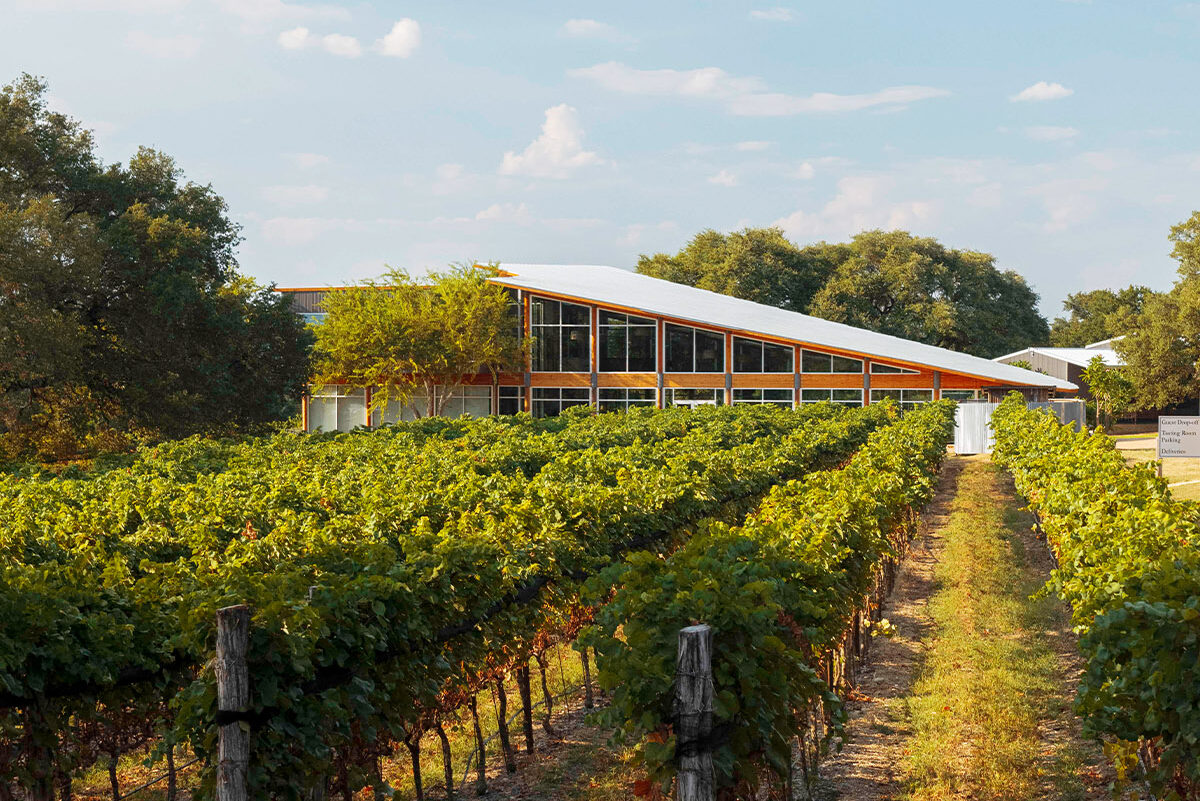 Join the Hye Society Wine Club at William Chris Vineyards for access to the stunning members-only lounge and shipments of five to six red wine releases per year.
Elizabeth Lavin

The prime attraction here is a little waterfall over a rock face dripping moss, which spills into a natural pool rimmed by ferns and elephant ear plants. When I arrive, the group campsites are full of families and folks with RVs. One group of several dozen is clearly on a retreat. On Saturday night, its boisterous members deck themselves in glow sticks and parade to the communal pavilion, throwing fistfuls of neon wands to the crowds like an electronica Mardi Gras. They proceed to hold a rave, music thumping, and I find myself carrying my tent over my head as I cross the campground, chasing sleep.

In the morning, I discover the other wrinkle in my plan. The gate to the property is closed from 8 p.m. to 9 a.m., but I am set to harvest clairette blanche at Ab Astris, which debuted the varietal in the state. So I need to get out. I’ve got people to see and grapes to pick.

Get your maps out.

Here are the 15 wineries you must visit during your next trip to the Texas Hill Country.

There have been generations and cycles in Texas wine. First were the Franciscan monks. Then came the first wave of commercial winemakers, who realized they couldn’t mimic the pinot noirs of Oregon nor the cabernets and chardonnays of California. In the 2000s, they planted varietals more suited to our rugged, unforgiving climate, heat-loving fruit from Southern France, Italy, and Spain. These were the years of the first tempranillo, viognier, and albariño. Winemakers began seeking out relationships with primarily High Plains growers, sometimes coaxing them away from a system that privileges commodity crops, like cotton and soybeans. As the bonds between growers and vintners grew, so did awareness of the state’s unique American Viticultural Areas, or AVAs.

Now, over a decade later, we’re seeing the leaders of a new revolution expand varietals and winemaking methods. But it’s not easy. In this state, vast as an Old World country, with a young winemaking industry with little infrastructure, they truck dry ice from Austin to Lubbock and share mobile crush machines in the fields to make their wines. They brave unpredictable weather patterns, from hurricanes to frost, that can wreak havoc from one vintage to another.

Still, they have a new focus on single vineyards and terroir-driven wines, and they are no longer hiding or blending AVAs but labeling growers, like Newsom, Reddy, Bingham, Oswald, and Narra. With a goal of making the wine industry more integrated and transparent, they’re angling for micro-expressions of terroir. And together, they’re still figuring out what grows well here to make wines with a sense of place.

They’re going to tell you about site-specific wines from the High Plains, where most Texas grapes are grown. You don’t know where that is? Well, you should know, they’ll say—not only the High Plains but this grower and this vineyard. And you’ve never heard of tinto çao or malvasia bianca? Well, that’s fine. They’ll still label them as single varietals, because this is what thrives here, and they trust you will learn. So when they ask, “Do you want to help harvest clairette blanche?” you simply say, “Yes,” and zoom out of the gate as soon as it is unlocked.

My other motivation, though, for harvesting clairette blanche was that I wanted to meet John Rivenburgh, the mysterious figure who is behind every reference I’ve heard to tannat, that red wine grape historically grown in Basque country on the border between France and Spain. He is running a collaborative research-focused incubator just up the road from Slate Mill Collective, which is doing something similar, trying to fill the custom-crush gap. But even as I pencil in the rendezvous to see my just-picked clusters crushed there later, I have to dash to meet the winemakers introducing Texas’ first prieto picudo and mencia, two Spanish varietals just approved in the States.

I’m invited into tank rooms to taste the just-crushed juice that tastes like watermelon candy, or a wine halfway through fermentation.

Meanwhile, I’m invited into tank rooms to taste the pre-fermented, just-crushed juice that tastes like watermelon candy, or a wine halfway through fermentation that has gotten all yeasty and hints at blackberry cobbler. And then come back, they urge, to bottle this effervescent pét-nat and taste this field blend rosé made using whole-cluster fermentation. They’re letting me sample their six-year muscat sherry project, which they kept secret from their own winery owner but which will be delicious, you can tell.

But throughout all of my harvestings and crushings and tastings, the one person I haven’t been able to reach is Regan Meador of Southold, who is, naturally, harvesting and crushing, and so I have all but written off the visit as a chimera, destined for another trip. Until it occurs to me on the last day that I can still wind my way to the top of the hill and witness the mythical tasting room, a house on a ridge, on my own.

So that’s what I do, squeezing it in before my last winery visits in Driftwood, on the way to Austin and then back up to Dallas. In my haste, I peel out, skidding and fishtailing on loose gravel roads, so that my car will later begin to make a strange flapping sound on the freeway as I head home, taking I-35 at 80 mph from Austin. (I came down Highway 281, obviously, because it’s more beautiful.) I will realize I have torn up the underside of one wheel well as I lie on the asphalt at a gas station, binding it up with cheap plastic twine.

But for now, what opens up before me is a house and a stunning view across two valleys. I am looking south down to the Pedernales River and to the north, through the rootstock vineyard, to its shimmering tributary. Windswept and breathless, I blow in like a tumbleweed only to find that the woman behind the counter, knitting from a skein of heathered gray wool, is the assistant winemaker, Adrienne Ballou, whose résumé I know and have been following.

I am here, at last, and I am completely smitten with this enchanted house upon the hill. The tasting room is an ethereal vision of white, like bleached driftwood, with people nestled in swings on the back porch, sipping from glasses of alicante bouschet, overlooking the valley below.