The Labor Day party hosted by Juug Smart was a banger. Cover was $30. There was a swimming pool and bottle service, and DJ Blaq was in the house. Just one problem: the party was in an actual house. It was advertised on social media and took place in an Airbnb rental at the end of a residential cul-de-sac in northeast Dallas. The midcentury is on the tax rolls for $800,000 and sits on a full acre that backs up to a creek. Neighbors were not happy.

“This has been going on for about two years,” says Kristen Doe, a 32-year-old data analyst who lives on the block with her accountant husband. Doe has become the de facto leader of an effort to end the parties and the traffic and unruly behavior they bring to the neighborhood. “I’m not an activist or anything. But I’m the person who will say, ‘This is not OK.’ I’ve got two little kids. It’s just not OK.”

The party house is owned by a man from Shreveport, Louisiana, named F. Lane Mitchell, who also owns a condo at the Residences at the Ritz-Carlton, Dallas. His property manager sounds just as frustrated as the neighbors. Kristin Gerst says she called the cops when she learned about the Labor Day party. “It took over five hours for Dallas police to arrive after several calls from me,” she wrote in an email. “I started contacting the neighbors and asked them to contact the police as well. This is not what I want to happen. It is ridiculous that there are inconsiderate people like that in the world.” 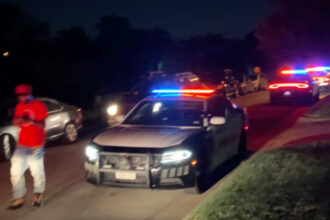 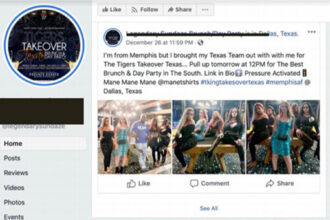 The house on Eden Roc has drawn street traffic to parties advertised online.

The house is no longer listed on Airbnb, which has a worldwide ban on party houses. But it is still listed on Vrbo. At $995 per night, with a two-night minimum, it is one of the most expensive short-term rentals in Dallas. While the city does have a task force studying the issue, it currently has no ordinance outlawing the commercial use of short-term rentals. Austin had such an ordinance, but it was struck down late last year by the state’s Third Court of Appeals. Some Texas cities have outright bans on short-term rentals.

A spokeswoman for the city of Dallas says the task force will make its recommendations next month, and the Quality of Life, Arts, and Culture Committee will likely take up the issue in January. For now, neighbors are left to their own devices. Doe launched a website called nomoredallaspartyhouses.com, and she and her neighbors have met with an assistant city attorney. Avvennett Gezahan told the group, “Mr. Mitchell has property rights, and this property is considered a single-family residence. He and his guests are allowed to enjoy the property, which can be a detriment to the neighbors. … I agree this is not fair to any of you.”