In 1855, Victor Considérant, a renowned disciple of the French socialist philosopher Charles Fourier, led French, Swiss, and Belgian settlers into North Texas to establish a socialist utopian colony on the banks of the Trinity River. Before coming to Texas, Considérant had been driven into exile in Belgium after a failed insurrection against Napoleon III in 1849. While in exile, he wrote a book called Au Texas, which laid out a vision for an egalitarian society in an untouched corner of the state that Considérant depicted as a new Eden. He raised about $16 million (accounting for inflation) and arranged for the Atlantic passage of hundreds of followers. We know how the story ends. Considérant’s utopian experiment, called La Réunion, failed after 18 months.

La Réunion’s crash is often attributed to the intellectual French settlers’ inability to farm, their ill-preparedness for North Texas’ harsh climate, and financial insolvency. But James Pratt’s new book, Sabotaged: Dreams of Utopia in Texas, challenges these assumptions. Pratt describes a settlement that, despite internal divisions and difficult conditions, managed to establish a beachhead on the west bank of the Trinity that supported about 150 settlers. He also paints a portrait of Considérant as impetuous and underhanded, determined to undermine the success of La Réunion before he even arrived. Pratt’s book raises an intriguing historical “What if?” But for poor leadership, La Réunion could have survived. 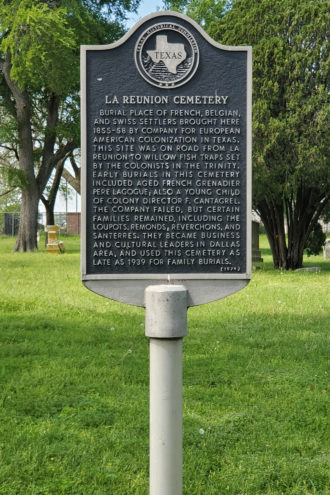 Take Me to The River: La Réunion once controlled the entire west bank of the Trinity. A small cemetery near Fish Trap Lake is all that remains.
Peter Simek

Pratt, an accomplished Dallas architect, died in 2018. For Sabotaged, he pored over letters and journals, producing one of the best-researched accounts of the experiment. As he tells it, the Europeans built extensive gardens, sawmills, and a winery under the direction of two of Considérant’s associates, François Cantagrel and Dr. Auguste Savardan, who often clashed with him. By 1856, the colony was already influencing life in Dallas. Locals visited to gawk at the impressive architecture of the colony’s few buildings, and they attended Sunday dances.

Despite Considérant’s skepticism of the La Réunion location, the prairies, woodlands, and creek bottoms on the west bank of the Trinity were primed for settlement. If it had held out, the colony would have been bolstered by Texas’ planned extension of a railroad line through the site. But after a freak ice storm in May 1856, colonists, disillusioned by internal strife and financial mismanagement, began to abandon the effort. Some moved back to France, and a few stayed in Dallas and played significant roles in the establishment of some of the city’s early professional trades and institutions.

There is no way to quantify what effects the colony of French intellectuals had on Dallas, though Pratt speculates that the European connection expanded the frontier hamlet’s concept of itself. “Why did fairs begin in Dallas as early as four years after the utopian Fourierists arrived?” Pratt wonders. “The frontier ethic alone did not embody that inquisitiveness. … One senses that a hunger for the world was early a factor in the Dallas psyche and a component of its competitiveness.” 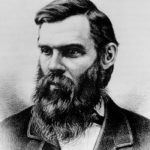 Julien Reverchon The Frenchman was 19 years old when he arrived at La Réunion with his family. He went on to become an accomplished botanist, pioneering the study of Texas plants. His important collection of specimens resides in the Missouri Botanical Garden at St. Louis.

Josse Vrydagh Vrydagh was an architect and designed the Greek Revival Hotel St. Nicholas, Dallas’ first building taller than three stories, which burned in the fire of 1860. He later traveled through the south to study the institution of slavery.

Jean Louckx A Belgian cabinetmaker, Louckx became a contractor in Dallas after the failure of La Réunion and went on to serve on the town’s first school board.

Benjamin Lang (Long) The Swiss colonist stayed and was elected mayor twice, serving during Reconstruction. He was murdered after trying to break up a bar brawl in Dallas.