Mark D. McCoy is a geospatial archaeologist and professor at SMU. Prior to our first meeting on campus, I had envisioned a dark office crowded with high-tech equipment and stacks of technical manuals. Instead, I walked into a light, airy space with a low-tech chalkboard and an approachable person who carries with him the sensibility of the sea. Raised in Delaware and educated in the States and New Zealand, McCoy focuses his efforts on Oceania. He has worked in the Hawaiian Islands, New Zealand, Pohnpei, and Palau.

His new book, Maps for Time Travelers: How Archaeologists Use Technology to Bring Us Closer to the Past, is like the author: accessible. While the book takes on the esoteric subject of how geospatial technology is revolutionizing the field of archaeology, McCoy wrote it for the layperson. He moves from the familiar—references to the time-travel fiction of Twain, Wells, and Doctor Who—to an explanation of how technology is being utilized in the exploration of human history. Each chapter takes on a geospatial tool (GPS, for example) and describes in jargon-free language how it is used in the practice of archaeology. 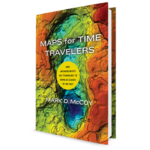 While McCoy interjects pop culture references, he does not shy away from dispelling stereotypes. One image he takes on is the archaeologist as Indiana Jones, a masculine “self-interested adventurer” who raids tombs and temples. While it may be entertaining, he says, it’s toxic, and times have changed. Modern archaeology is performed by diverse teams (with some degree of gender parity) looking for something more enduring than artifacts.

According to McCoy, prior to the geospatial revolution, there have been two major shifts in the last 70 years that have shaped archaeology. One is a tool, radiocarbon dating, and the other an approach pioneered by Lewis R. Binford, who taught at SMU near the end of his career (1991–2003) and introduced new ways of thinking about archaeological work.

McCoy, in writing about Binford’s “new archaeology,” asks: “Is the goal of archaeology to reconstruct life at one given moment” through singular sites and objects, or should practitioners focus instead on “finding grander patterns”? If it’s the latter, the geospatial toolkit is capable of excavating without digging and performing important work without collecting artifacts. With geospatial software, all the data ever produced in reference to a site—whether it’s the work of the old archaeology or the new—can be entered into one database and cross-referenced in a multitude of ways.

“Maps are for us. No other creature needs them. They are the way we humans make the world legible for ourselves.”

McCoy gives one example in the book of how Texas could benefit from the geospatial revolution. “There are more sites in Texas than active oil wells,” he writes, which is not surprising, “given people have been living here for about 20,000 years.” The issue, then, for archaeology is “not that sites are rare but how many sites we have.” To make that determination, he says, “we need lots of time, money, talent, and technology.” Along the Gulf Coast, the primary threat to piecing together the past is not looters but a rising sea. According to the book, when Hurricane Harvey struck Houston, in 2016, “about 1,000 recorded locations with archaeology were flooded, and that was just a fraction of the 3,000 known to archaeologists at the time of the storm.”

The impetus for writing the book, McCoy says, is to teach a broad audience about what it is that archaeologists do. And because there are few archaeologists working today who don’t in some way use geospatial technology, the book focuses on the present day tools of the trade: “software (GIS), hardware (GPS, drones, laser scanners, satellites), and data (layers with points, lines, or polygons; or point clouds; or images).” The software, hardware, and data, he says, “come together to support things like satellite navigation or web maps.” McCoy manages to make the subject matter in his book approachable, humorous, and sincere; he gives several examples of how people with smartphones are using this technology every day, though they may not know it.

“Maps are for us,” he says, because “no other creature needs them. They are the way we humans make the world legible for ourselves.” And to make maps work, we need reference points—where are we presently and where is it we want to go? In Maps for Time Travelers, McCoy offers a few starting points, while breaking down old tropes about the work of archaeologists. He has constructed a time machine of a book that will get you to new places.