Enjoy unlimited access to all of our incredible journalism, in print and digital.
Subscribe Now
Advertisement
Weekend Getaways

Whether you’re looking for a solo, soul-affirming retreat or a spouse-free escape with friends, here are some options to spend a stress-free weekend in a cabin.
January 7, 2020|12:15 am

Fans of Fixer Upper may have caught the season 5 episode with Jimmy Don Holmes, a metalwork artist and frequent collaborator with Chip and Joanna Gaines. Jimmy Don wanted to transform a vacant 763-square-foot cabin on his property into a house for his 21-year-old son, Jake. Joanna chose a modern mountain man aesthetic for the remodel, and the result is unrecognizable from the original.

The oak tree out front is from George and Laura Bush’s tree farm on their nearby Crawford ranch. Large picture windows provide clear views of the dozen or more deer that wander up at dawn and dusk, and the second-floor loft bedroom offers expansive vistas of the surrounding rural acreage that once belonged to Jimmy Don’s great-grandparents.

Jake has since married and moved on, so Jimmy Don now rents out the cabin to those looking for a quiet retreat. Avoid the bustle of the Magnolia Market and venture south to McGregor, where you’ll find the Texas Museum of Theatre & Broadcast and the Spradley Telephone Museum (open by appointment only). Enjoy a country breakfast at The Coffee Shop Cafe or a dinner of calamari and fettuccine Alfredo at Luigi’s, the BYOB Italian restaurant owned by a Kosovan immigrant (and once visited by the Bushes).

Before you leave, stop at Jimmy Don’s nearby metalwork studio, which manufactures 20,000 signs per month, most of which are for the Magnolia Market. Cabin guests receive an autographed copy of the one featured on Fixer Upper, which hangs at the bottom of the cabin stairs: “Work Hard & Be Nice to People.”  —Kathy Wise

Cost Per Night: $189+ The Specs: 2 bedroom/1 bath, sleeps 4 Pets: Not allowed Stock Up: At the nearby Mill-King Market & Creamery, you’ll find raw milk, cheese, and grass-fed beef from this family farm in McGregor. 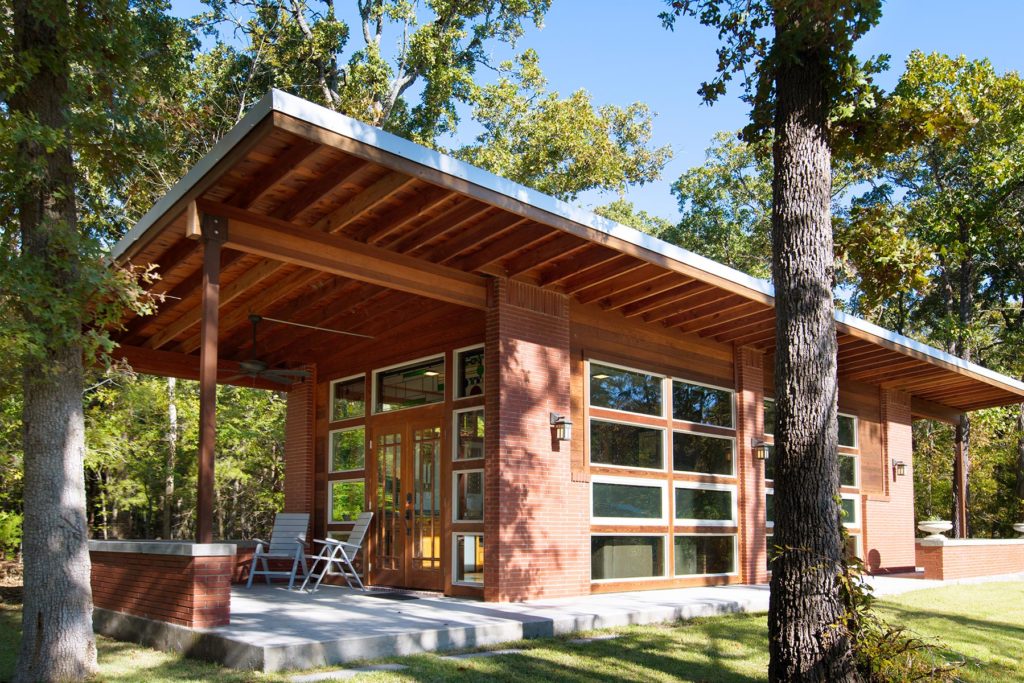 Three years ago, when Risinger got a call from a judge in Oklahoma asking him if he wanted to acquire the plot of land adjacent to his hardware store in Royse City, he assumed it was a scam. He came to find out that the woman who had lived there had become a ward of the state, and the court was trying to liquidate her assets and pay off her debts. Risinger says he didn’t really know the woman, but he had run a hose out to her mobile home once when her water was cut off. Apparently she remembered the act of kindness and gave the judge his name.

Risinger was ultimately able to purchase the 10 acres in exchange for paying some back taxes and miscellaneous debts, obtaining a $10,000 burial policy for the woman, and keeping enough money in her commissary account to cover her soda and candy needs.

“The day after Thanksgiving, I walked the property for the first time in my life,” he says. “And I thought, Holy poo-poo, what have I done?”

He quickly decided the land would be perfect for a warren of wooded cabins. For the first one, he took inspiration from Frank Lloyd Wright’s Darwin Martin House in Buffalo, New York. He even tracked down the brick manufacturer in Kansas City, Kansas, which still had the original molds and re-created the bricks for him. Thanks in part to its proximity to several wedding venues, the cabin immediately rented out. Risinger has since added three unique designs and has plans for more, including a treehouse.

“It’s simple and secreted,” Risinger says of the property’s appeal. “There’s trees all around. You can see the other cabins, but you can still feel by yourself. I tell people don’t worry about locking the doors. Just chill and relax.” —K.W.

Cost Per Night: $229+ The Specs: 1 bedroom/1 bath, sleeps 4 (the largest cabin on the property sleeps 8) Extras: Hot tub, fireplace Dinner and A Stroll: The Dallas-based Matt’s Rancho Martinez has an outpost within walking distance of the property, and the Sweetwater Grill, with live music on weekends, is just up the road. 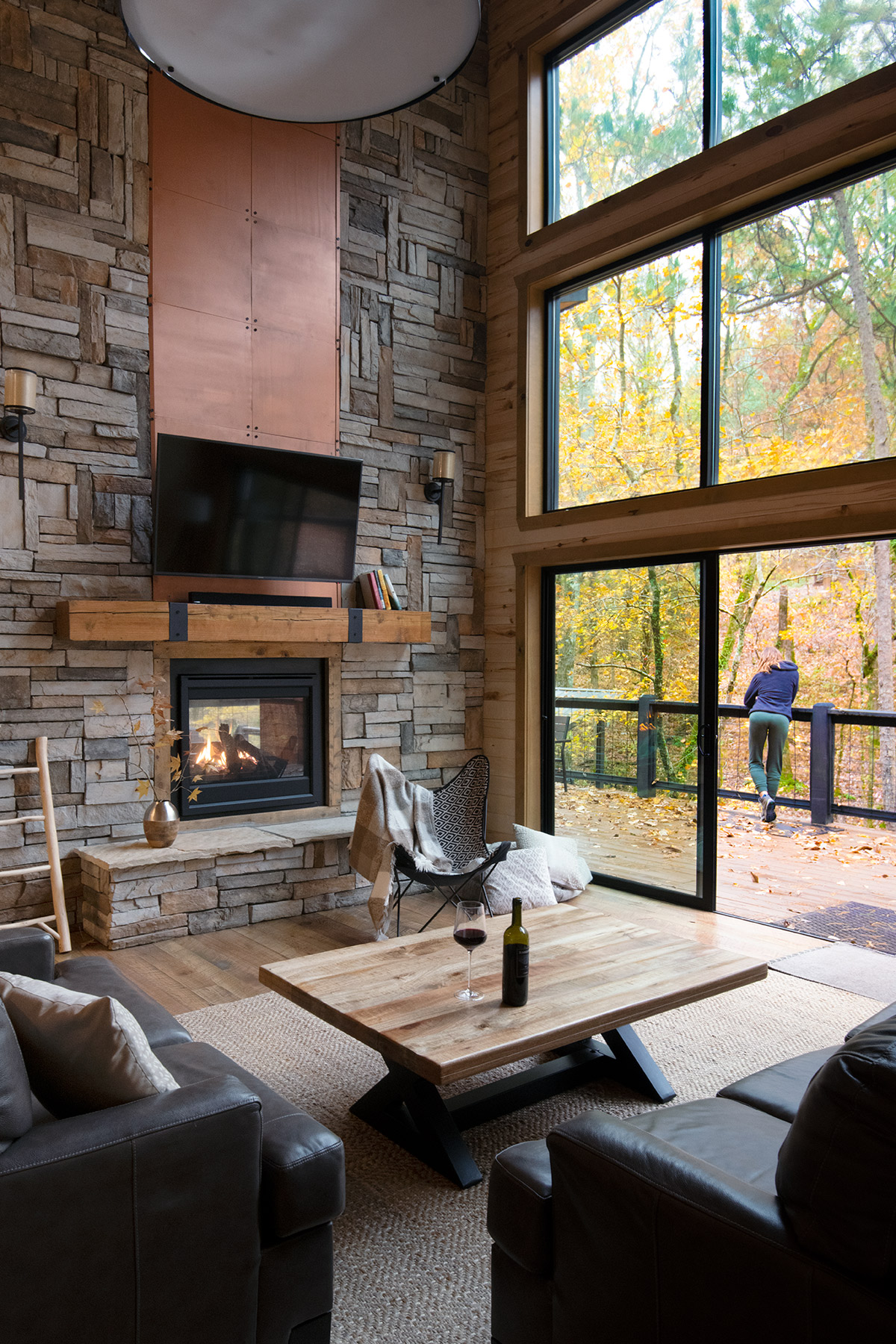 The plan was for a women’s weekend without kids or spouses. The five of us, who drove separately in three vehicles and didn’t really coordinate efforts, arrived with 18 bottles of wine, a bottle of tequila, a couple of pounds of fancy cheeses, and several tins of caviar secreted on ice in a Yeti coffee mug. That got us happily through the first night.

We forgot swimsuits for the hot tub (not a deterrent) but remembered bug spray for the chiggers. There was plenty of propane for the gas grill, so our Berkshire pork chops and white asparagus had a gorgeous sear, and there was a stockpile of dry wood for the fire pit. But whoever brought the blood oranges and Topo Chico for the tequila was the true genius.

There’s some magical alchemy that happens when you hole up with friends in a house that’s not your own, in a landscape that is foreign, with booze that is plentiful. Especially if that house has floor-to-ceiling windows through which you can watch the forest leaves fall like snow, cradling a mug of coffee while one of the early-waking, faster-recovering moms makes a 12-egg frittata with last night’s fancy cheese remains.

This cabin set at the bottom of a steep ravine alongside a babbling brook feels like a ski chalet in Colorado, and that’s no mistake. Dallas wine dealer Kevin Rust and his wife, Micah, first looked there when they decided they wanted to purchase a vacation property as an investment. But after a friend invited them to Broken Bow with their young twins, they fell in love. They now have four luxury cabins that they’ve designed and decorated, and they’re working on two more.

“It’s perfect for kids,” Kevin says of the area in Ouachita National Forest. “It’s great for hiking, fishing, or just s’mores. We’re actually going up there with our friends and family the next two weekends. Whether it’s skipping rocks or climbing trees, the kids absolutely love it.”

Cost Per Night: $250+ The Specs: 2 bedroom/2 baths, sleeps 6 (other options sleep up to 14) Best Winter Hike and Reward: The David Boren Trail in Beavers Bend State Park offers 12 miles of hiking trails with varying levels of difficulty, through hardwood and pine forests, up to ridge tops with breathtaking views of Broken Bow Lake. Afterward, refuel with a Psychedelic Supremo at Grateful Head Pizza Oven & Tap Room.

Getaway was founded by two Harvard Business School grads who wanted to help city dwellers in Boston, New York, and Washington, D.C., get back to nature and unplug. As a part of the rental startup’s expansion, a Getaway Outpost cropped up in the Piney Woods, less than two hours from Dallas, just in time for winter. The property includes 32 two-person cabins with queen beds and eight four-person cabins with queen-size bunk beds.

The drive to the Piney Woods was as easy as finding the cabin (“Sandy”). The Getaway team texted on the day of booking, sending a four-digit code to get into the tiny house after 3 pm. Upon my arrival, the minimalistic, black-painted cabin with its picnic table and two Adirondack chairs by the fire pit were all in their rightful, Instagram-ready places.

But I diligently put my cellphone in the provided lockbox and carefully tucked my bag out of sight so as not to mess with the picture-perfect setting. I lit a fire, which I sidled up to with a book (Getaway provided Henry David Thoreau’s Walden, among other titles) and a bottle of wine (not provided). At bedtime, I took a hot shower with biodegradable soap in my cabin’s streamlined bathroom and curled up in the fluffy white bed. I thought it might be unnerving to be alone in the woods, but I felt perfectly secure in my little heated box.

Provisions like s’mores and coffee (but not alcohol) are available for purchase, but they’re relatively scarce. There’s a mini fridge if you’d like to take your own supplies. And there’s no wifi, so be sure to download your reading material ahead of time or pack a paperback.

In the morning, I took a brisk walk along the towering tree-lined path, passing cabin (“Bob”) after cabin (“Woodie”), each with a car parked in front. It was comforting knowing that the area was filled with other people taking a little Getaway. I hope they got some good photos for Instagram. —Caitlin Clark

Cost Per Night: $139+ The Specs: 1 bedroom/1 bath, sleeps up to 4 Pets: Dogs allowed Outside the Box: Your cabin may be small, but nearby open-air options include New York Texas Zipline Adventures in Larue and the top-rated Pine Dunes Resort & Golf Club in Frankston, both open year-round.

Come for the cool, contemporary exterior. Stay for the beautifully landscaped backyard.
By  Emily Heft
Style

Can you take the heat?
By  Caitlin Clark
House Cleaning

Nothing to read here. Carry on.
By  Eric Celeste
D Magazine Directories