The scene repeats itself throughout the early day and into late afternoon, as fans, mostly of the Dallas Cowboys but a few of the visiting Minnesota Vikings, begin to converge on AT&T Stadium. Among the cacophony of competing stereos and smell of grilled meats, they see the group of cars, so close to the stadium that surrounding lots charge $100 to park. But it’s not proximity that sets them apart. “Look at that!” someone will say, and then, almost instinctively, they and their traveling party will walk toward the custom-designed cars, pulling phones from their pockets.

Some ask for permission. “Take as many pictures as you want,” the owners of the cars answer. Others don’t. They just take them—selfies, taking turns posing, parents telling children to stand there and smile. A few, as if they realize it’s futile to try to capture the small details of each car in one snap, instead record videos, walking with baby steps around these rolling monuments to the Cowboys.

They capture the candy-colored paint job that sparkles in the sun. The murals on the cars of past and present players and coaches. The interiors lined with so many blue and silver stars that it feels impossible to count them all. The blue chrome 28-inch rims that, at the center, have the logo and name of their car club, CowboysLife—one word added so as not to infringe on trademarks. 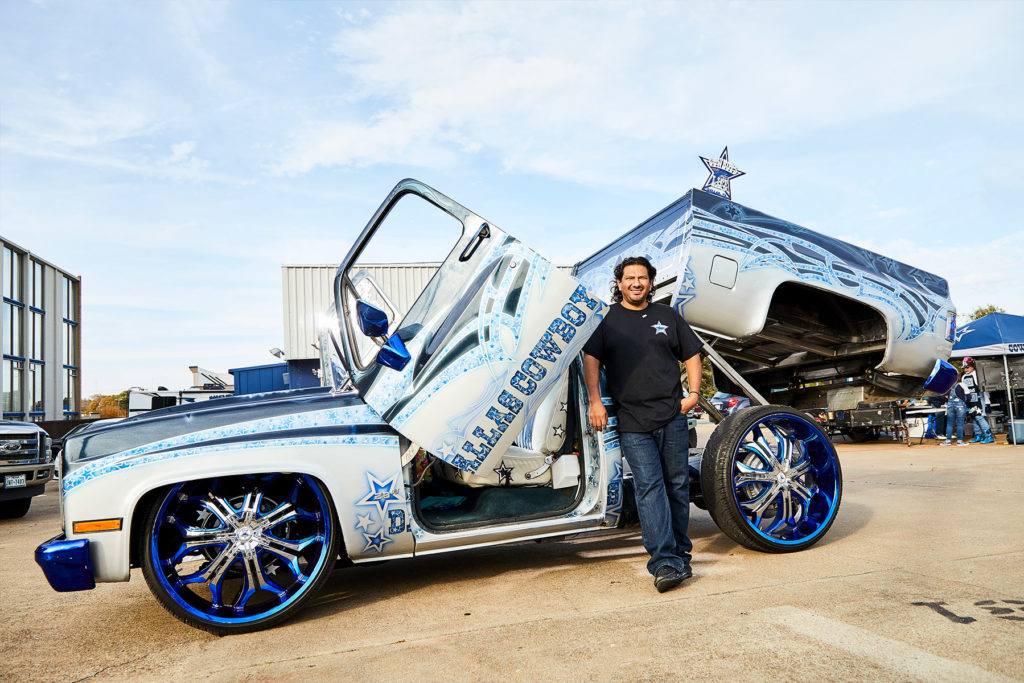 These cars—four of them made the trip for the Cowboys’ nationally televised Sunday night game against the Vikings—are part of a club that’s been at most home games since the stadium opened in 2009. In the decade since, the membership has grown. Members as far away as California have dedicated their Hondas, Chevys, or Nissans to the team they love. There’s even a Cowboys-themed lowrider bicycle among the club, as well as a Harley and a four-wheeler.

Everyone can’t attend every game, but there’s always someone here, across from the Blue 10 parking lot. At this year’s season opener, against the New York Giants, 1,000 people attended the CowboysLife pregame festivities. And no matter how many come, they tailgate, cooking on a custom-made 150-gallon grill that’s so big it’s attached to a small trailer, which has a pole flying a Cowboys flag. Under that banner, fluttering in the breeze of this mild day, CowboysLife members eat tacos and drink beer. They listen to music and watch other games on TV until it’s time for their team to take the field.

“I’d had some that, after taking pictures, someone will say, ‘Man, I hate the Cowboys, but I love your car,’ ” Jose Saldivar says. Jose is the founder and president of CowboysLife. He has a CowboysLife tattoo on his left arm, which he got a few months after the club began, in December 2009. Jose drives a 1986 Chevy C-10. Until a drunk driver slammed into it, as it sat parked outside Jose’s house, it was the truck his father used to work as a roofer. Its name is Dynasty. It has Lamborghini scissor doors and a pinstripe paint job in Dallas Cowboys colors, and when Jose parks Dynasty, the truck drops several inches. The bed raises and tilts, looking like a Transformer. Its hood is blue, and at the center, toward the windshield, a mural depicts the team’s five Super Bowl trophies in front of Tom Landry and Jimmy Johnson.

About the only thing that isn’t Cowboys related is the front license plate. It’s the logo—a tando hat atop sunglasses and a thin mustache—associated with lowriders, going all the way back to when they were called pachuco cars, after the Mexican and Mexican-American youths who wore screaming-bright zoot suits. When car culture took hold after World War II, they filled their trunks with bricks and bags of sand and cement, and drove their cars bajito y suavecito. Low and slow.

At the very least, lowriders—and other cars that clubs form around—are an extension of one’s identity. At most, they’re a political statement. It’s a street aesthetic that says something, perhaps everything, about the person driving: where they come from, who they are, what they refuse to hide of themselves. Regardless of what significance they hold, it’s an aesthetic that’s expensive.

From the bottom to the top—wheels and rims, hydraulics or air bags, paint job, interior, and everything else related to the vehicle’s inner workings—it takes money and resourcefulness to make one’s car stand out. Jose estimates his truck has $40,000 worth of work. And yet he spent only about a quarter of that, incrementally—a few hundred dollars here, a few more there, first fixing one part of the truck, then another, doing as much of the work himself as he could. And since it’s part of their purpose and function, Jose, like every other member, relied on the club for help.

Members as far away as California have dedicated their Hondas, Chevys, or Nissans to the team they love. There’s even a Cowboys-themed lowrider bicycle among the club, as well as a Harley and a four-wheeler.

For these clubs to work, in general, they must also give something back to the places they come from. They already draw enough attention. “You have to do good in the community to basically keep going,” Jose says. “If you’re out there creating havoc, nobody invites you, nobody wants you. So then there’s no point of you out there as a car club.”

That aspect of CowboysLife attracted Osvaldo Rojas, who until five years ago, when he joined the club, wasn’t even a sports fan. He owns a 1996 Ford Bronco named America’s Tribute. It’s camouflage wrapped, with a large blue star on each door. When he revs its engine, all the ambient music from nearby tailgating parties disappears. “Mainly, what I like to do is charity work,” Osvaldo says.

For CowboysLife and other affiliated groups, that charity work includes annual scholarships and toy runs. They’ve given away bikes. They’ve hosted a car show—Rolling for the Cure—where all money raised went to the Susan G. Komen foundation.

Car clubs form around themes. Some are just lowriders. Others are just cars of a certain make or model. Some clubs are full of cars that remind you of The Fast and the Furious. CowboysLife, of course, unites around a love of the Dallas Cowboys. Most members inherited that love from their families. For some, this is also where their love of cars comes from. Presumably, this is what will happen with the young children running around at CowboysLife’s tailgating events.

“The reason I became a Cowboys fan was because of my dad,” Jose says. On game days, his dad would wear a Cowboys jacket while watching alongside family, including young Jose.

For Randy Samora, it worked the same way. “Since a baby,” is how he answers when asked how long he’s cheered for the Cowboys. Randy, who lives outside of Houston, has been a member of CowboysLife for four years. He saw a picture of Jose and Dynasty in a newspaper and said, “I want to do something like that.” So he joined. He converted his silver 2007 Jeep Wrangler into Dem Boys, a play on the Wiz Khalifa song “We Dem Boyz.”

Randy’s Dem Boys is an ode to the storied history of the team. Players from past and present—Roger Staubach, Troy Aikman, Jason Witten—blanket the doors. The wheel cover at the back has the car club’s own blue star logo, “We ride with pride” circling around it. The only part of Dem Boys that seems untouched by anything Cowboys related is the top. “That will be dedicated to the Super Bowl,” Randy says. “That’s what it’s waiting on.”

An entire generation knows only of the past Cowboys’ success based on what they’ve read and seen in old recordings, along with what older fans tell them. For them, it’s been nothing but frustration. “That freaking field goal from Romo,” Gabriel Saldivar says. “The botched snap, that’s the worst one. You can call it whatever you want; that botch started it. Every year Romo came back, I had confidence until playoff time came around.” 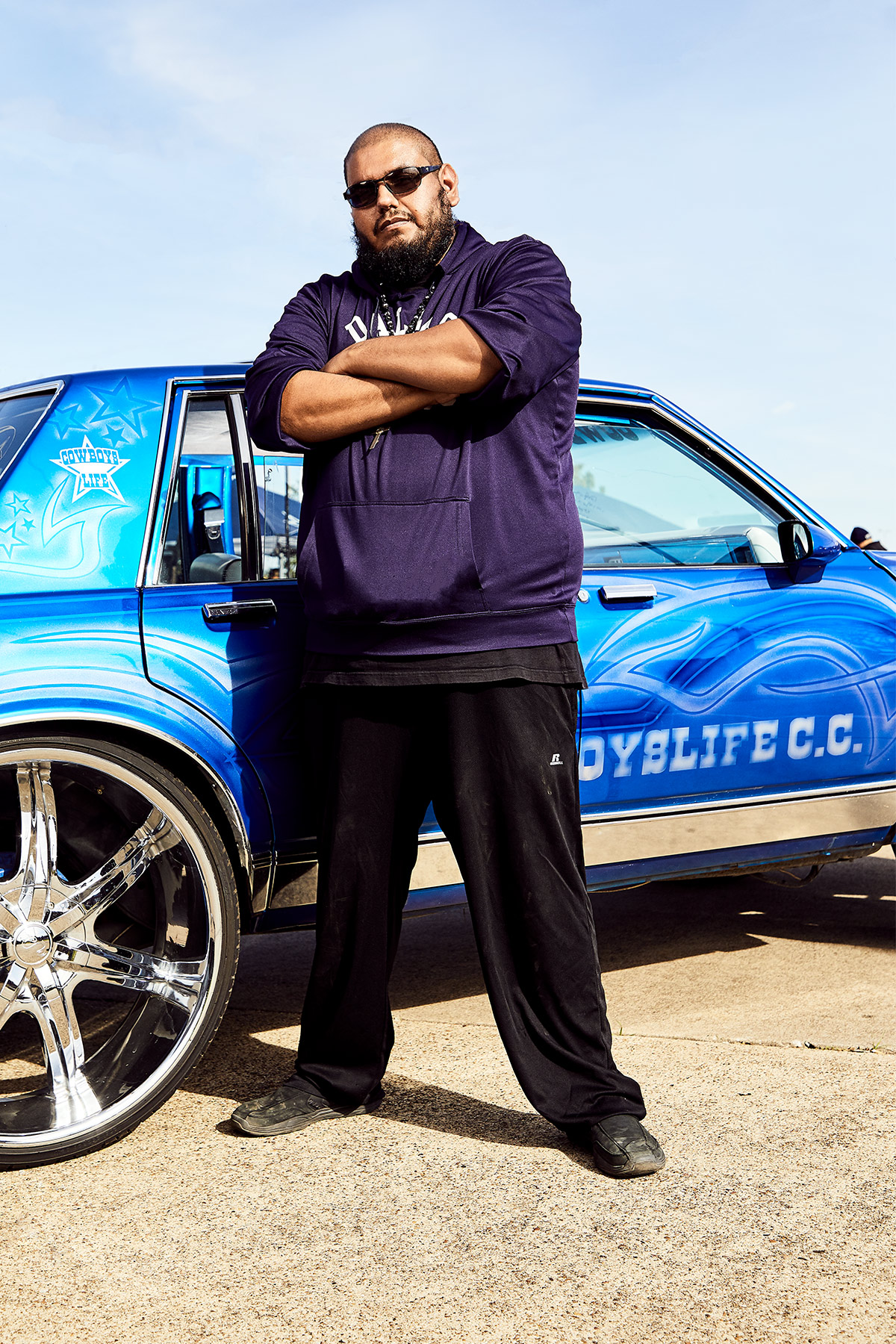 Gabriel has a 1989 Chevy Caprice. “The same beautiful car that you saw on that movie Hustle & Flow” is how he describes it. A certified minister with an easy laugh and smile to counter his imposing 6-foot-3 build, Gabriel named his blue car Hail Mary. It’s the one that stops the most passersby. Drew Pearson, who caught that last-second Hail Mary pass to win a playoff game in 1975, signed the glove compartment. Original jerseys of Emmitt Smith and Michael Irvin cover Hail Mary’s seats.

At 34 years old, Gabriel mostly remembers the parades from the last time the Cowboys won a Super Bowl. He’s confident they’ll win one again. “First of all, we’re going to try to get into that parade downtown, ’cause you know that’s gonna happen,” Gabriel says as he watches his 2-year-old son play inside the car. “And then after that, on the back side,” he points toward the chrome bumper glistening in the sun, “we’re just gonna add the years. And I’ll have six.”

Tonight, though, the Cowboys lose. The Vikings intercept Prescott’s attempt at a Hail Mary. The slow-moving, postgame traffic feels almost unbearable. Stuck looking at all the red taillights ahead, hardly anyone moving, there is time to reflect on more than two decades of losses, all of the almosts and not-good-enoughs since the last Super Bowl win.

“I feel disappointed,” Jose says. The team he’s always watched while surrounded by friends and family. The team he loves so much that he dedicated a car club to them. “It’s kind of like having a child. They do something wrong, it disappoints you. But you still love them to death.”