We talked to the Lake Dallas crazies fitting their lives inside 300 or 400 (meticulously executed) square feet.
By  Rebecca Lee Moody | February 5, 2020|12:00 am
View Gallery
View Gallery

When the tiny house movement started rolling some five years ago, who’d have thought the idea of living in something the size of a large walk-in closet would take off? But, as it happens, going small has become so big that there are tiny house-themed TV shows and festivals. For owners of tiny houses on wheels, home is where you park it, and they can be found on farms, in corners of private properties, and in rural tiny house communities.

Those were the only options until Terry Lantrip got involved. The Lake Dallas real estate developer had a unique vision a couple of years ago that landed him in the spotlight of the national movement: a village exclusively for movable tiny houses, located in an urban area. Lantrip set about creating the Lake Dallas Tiny Home Village, and, after a three-year ride from concept to completion, the country’s first tiny house community to be built within city limits opened in October.

Lantrip saw his first tiny house at the State Fair of Texas in 2014. “I thought it was the cutest thing ever,” he says. “The following year, at Earth Day in Dallas, there were nine of them, and the lines were so long I didn’t even get to go inside any. But I saw how popular they are. When I proposed the idea of an urban village to the Lake Dallas City Council in 2016, they liked it. They thought it’d help revitalize downtown.”

Along with their interest, the Council also had some concerns with the Aubrey, Texas, native’s novel proposal. “They wanted to see a list of community rules, as well as to regulate it so as to ensure its long-term success,” he says. “We all had to learn what we were doing, since it wasn’t something anyone had ever dealt with. It took about a year to get the green light.” Then another to prepare the property with utility connections, landscaping, and the establishment of individual spaces for the village’s 13 houses to come.

Lantrip is pleased with how positively the village has been received. “People really think the houses are cute and a good addition to the community,” he says. “It’s making a huge impact. Churches and businesses have been doing gift packages to welcome the residents.”

One person’s closet truly is another’s castle. Lantrip says his Lake Dallas tenants “are a cohesive group, all of whom have the same mindset. I couldn’t ask for anything better.” 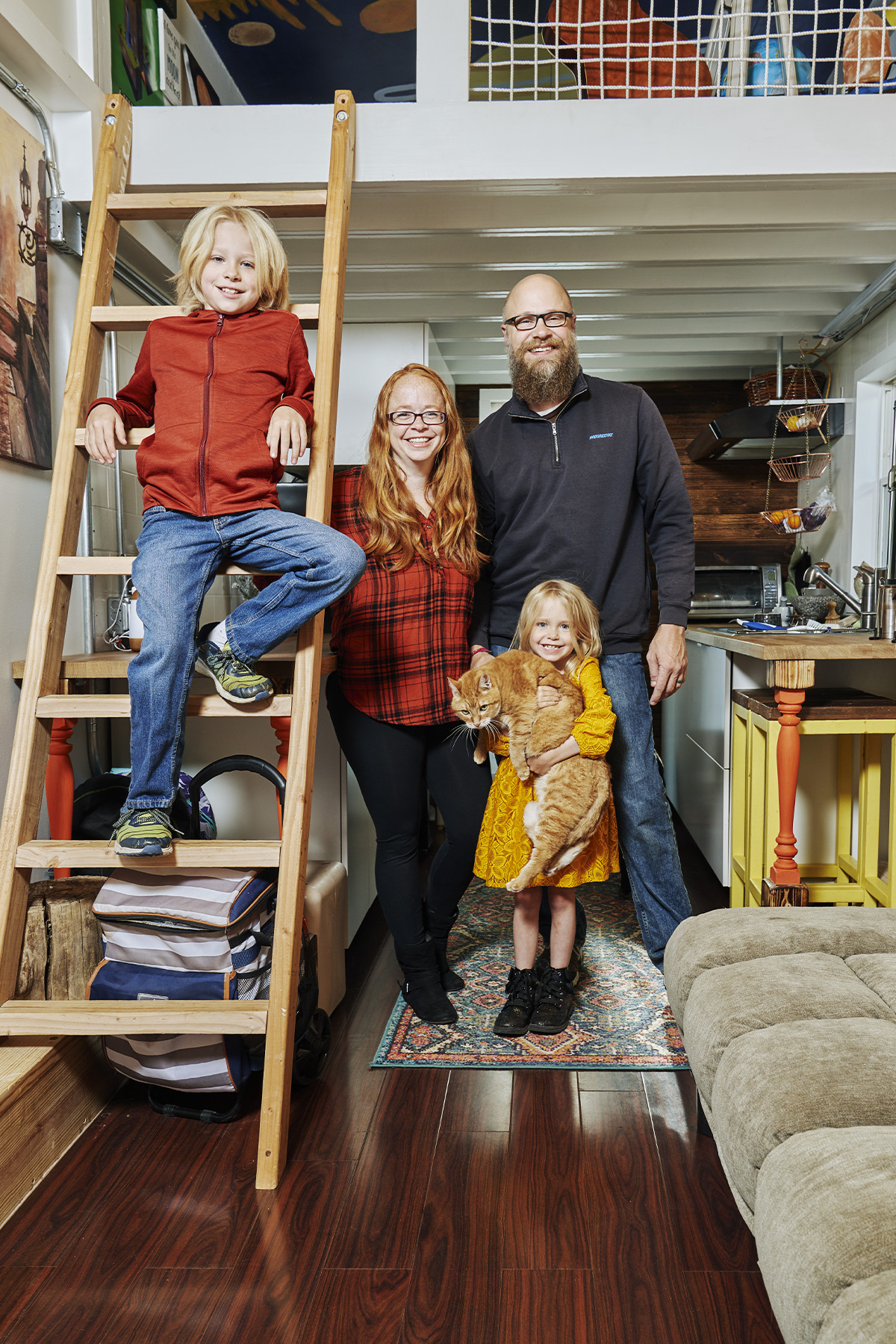 A party of eight, the Schon family is not tiny. Parents Rick and Katie share their 375-square-foot home with 10-year-old son Jakub, 6-year-old daughter Cora, a duo of dogs, and two cats. The Schon Schack was built from the trailer up by its occupants. “The thing we like the most about it is that because we constructed it ourselves, it’s customized specifically to our tastes and needs, as well as being one of a kind,” Katie says. The kids’ commute to their classroom is short—in fact, just across the house. Jakub and Cora are home-schooled. “Doing that in a tiny house is a breeze for us, because our educational style includes lots of outings, play dates, field trips, outdoor exploration, and two home-school co-ops,” Katie says. “That said, we definitely have to use our space wisely, storing games and supplies in the couch and such.” 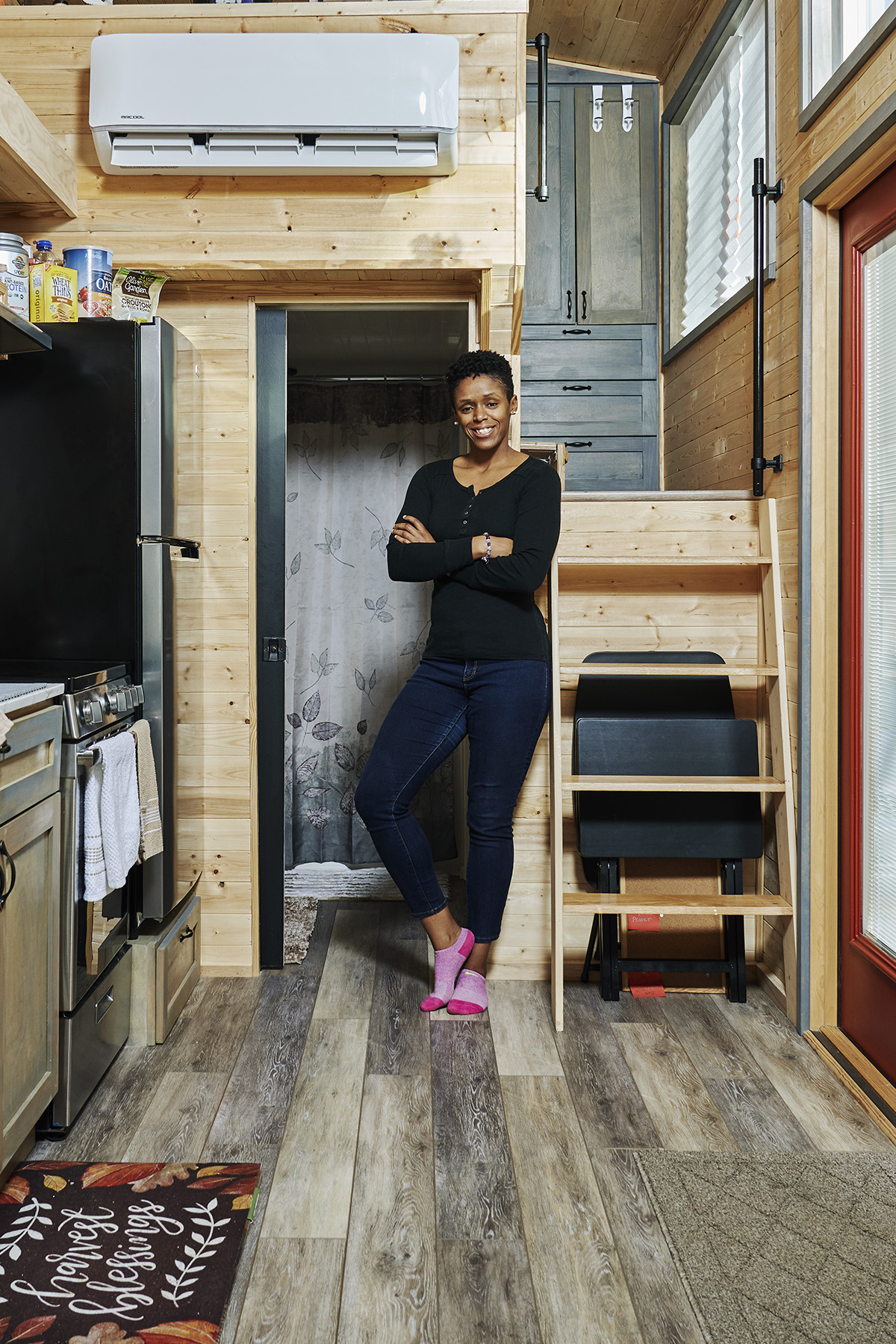 Walton has been in her house about four months and hopes to add another tenant soon. “I plan on having a dog,” the Los Angeles native says. Inspired to radically reduce her residential footprint for “the simplicity of it all, the geographical freedom, and the ownership,” Walton also really likes her neighbors. “I’m big on community and enjoy being around like-minded people navigating through life at their own particular pace that just so happens to bring us all together,” she says. With its balcony (an unusual architectural feature in a tiny house) and big windows, Walton’s place is just what she’d been visualizing since she was a child. “I’ve been dreaming and writing about this since I was 12 years old,” she says. A village highlight for Walton: the Saturday night bonfires. “Sitting around a fire on a crisp night, listening to nature or a neighbor playing one of their favorite instruments—it gets no better.”

Sometimes you just know. When they went house shopping, Jamie and Malone homed right in on their specific house, no dillydallying about it. Ramblin’ Rose, as they named it, is only 24 feet long, making it the teeniest of the village’s tinies. “We loved the interior wood accents and the split-level loft,” Jamie says. The family cats, Kiki and Leon, also dig it. Buying a tiny house allowed the couple to own a residence while avoiding the long-term commitment of a mortgage. It also meant they’d have less stuff. “We were surprised at how much we actually had in our old apartment,” Jamie says. “The initial downsizing was the hardest part of moving into a tiny home.” Tiny-house people often talk about the social glue created by lifestyle, and the Waterses have definitely seen the effect. “Living in a tiny house has actually improved our social life,” Malone says. 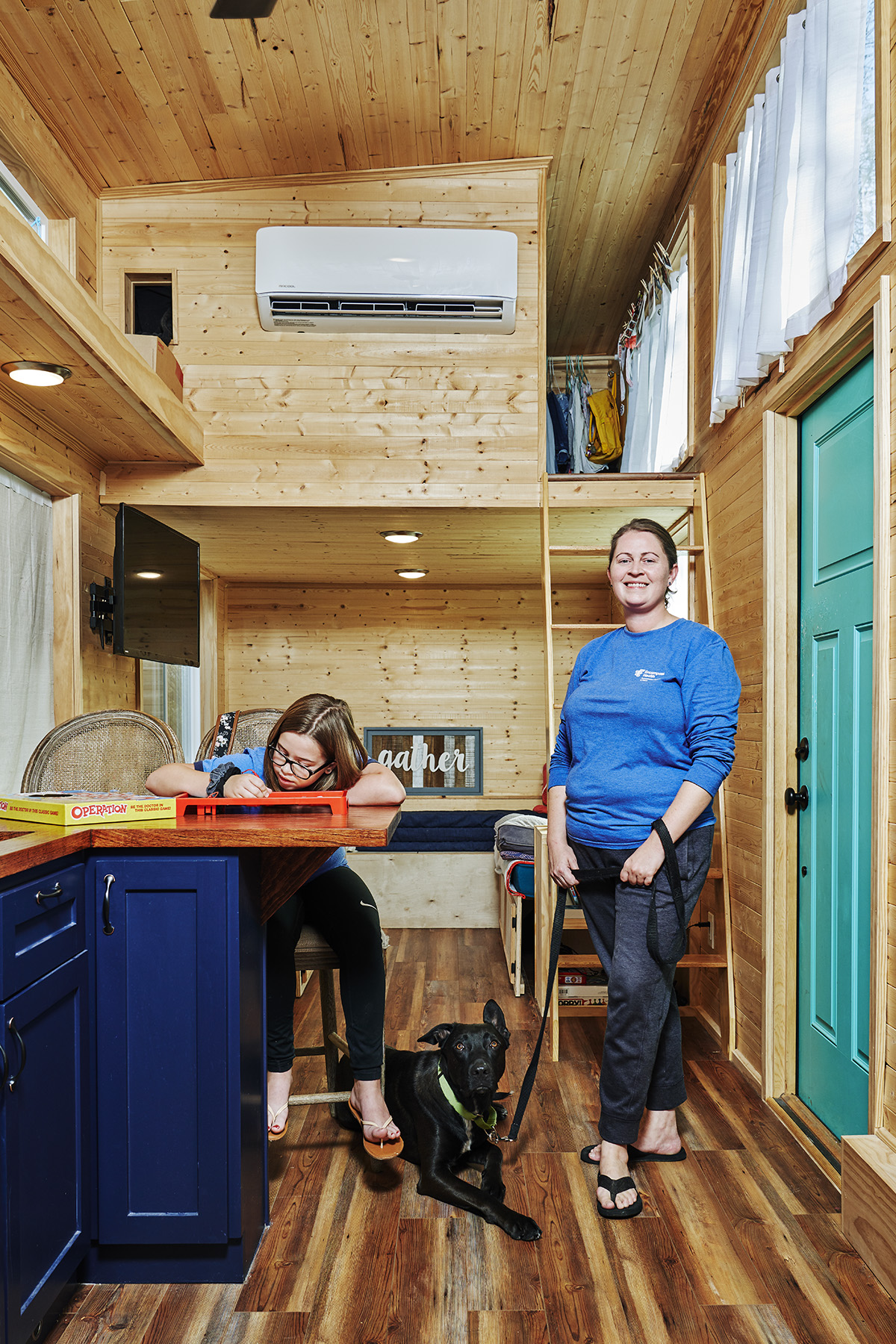 When friends and family heard Eady was planning to live in a tiny house, she says, they thought she was insane. Over time, though the vibe shifted to a more positive angle, some skepticism has remained. “They’re still concerned about our long-term happiness, but I am not,” Eady says. She lives in her little space with her 10-year-old daughter, Ryan, and two pets: a Shepherd dog, Hershey, and their super affectionate cat, Mr. Beau Buttons. “This was part of my journey to financial freedom,” the single mom says. “It creates more opportunities for my daughter, increases time for fun, decreases hours spent on home maintenance; and I really love how quick it is to clean!” Ryan, too, is fully on board with the family’s new quarters, finding it “really cool, because you have more freedom, and if you move you can take your house with you. Also, you get to be different from other people and teach them about tiny homes.”

The sculptural pieces will light up your life in an artful way.
By  D Home
Home & Garden