The restaurant industry is not known for its stability and predictability. This year, though? Pure pandemonium. Still, plenty of newcomers joined Dallas’ dining scene in 2020 through sheer will and true grit, adjusting to ever-changing dine-in guidelines and growing takeout demands. So the idea of what makes the very best restaurant experience, much like our eating habits, had to change. We’re giving props to the people and places that have braved this reimagined landscape to bring us something new, delicious, and comforting. Lord knows, we need it. Click here for the full list of restaurants and feel free to print it and check them off.

A Spanish vacation through food

The Wild Detectives team brings Bishop Arts a pincho bar serving bite-size Spanish morsels: tender octopus, quail egg-topped chorizo, goat cheese and quince paste on toast. The paella sends you to Spain with each bite, as does the drinks menu, from the quintessential gin and tonic to a glass of crisp txakoli. 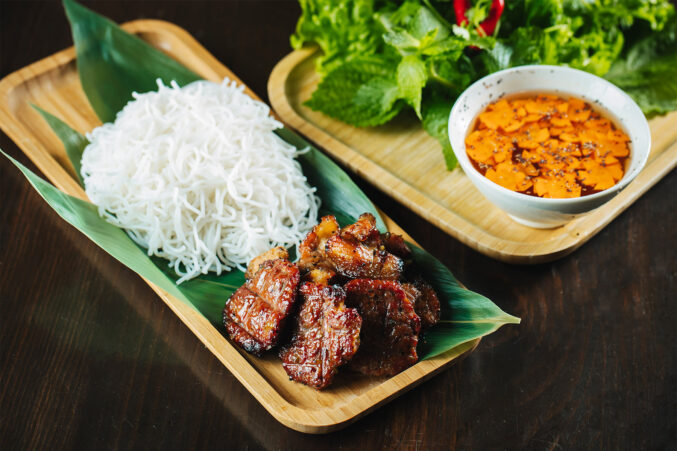 At this latest addition to Lower Greenville, it’s not just the bánh mì station with cognac-infused pâté or the sweetened egg coffee with a soft layer of whipped foam that steals our hearts. There are also regional dishes like lemongrass-fragrant bun bo Hue or the chilled vermicelli bowl bun cha Hanoi.

A hip cup of joe

What started as a roving van doling out to-go cups of cortados and Americanos on weekends has emerged as a winsome, plant-bedecked coffee spot where one might crack open a book—or a magazine!—and chill for a while. 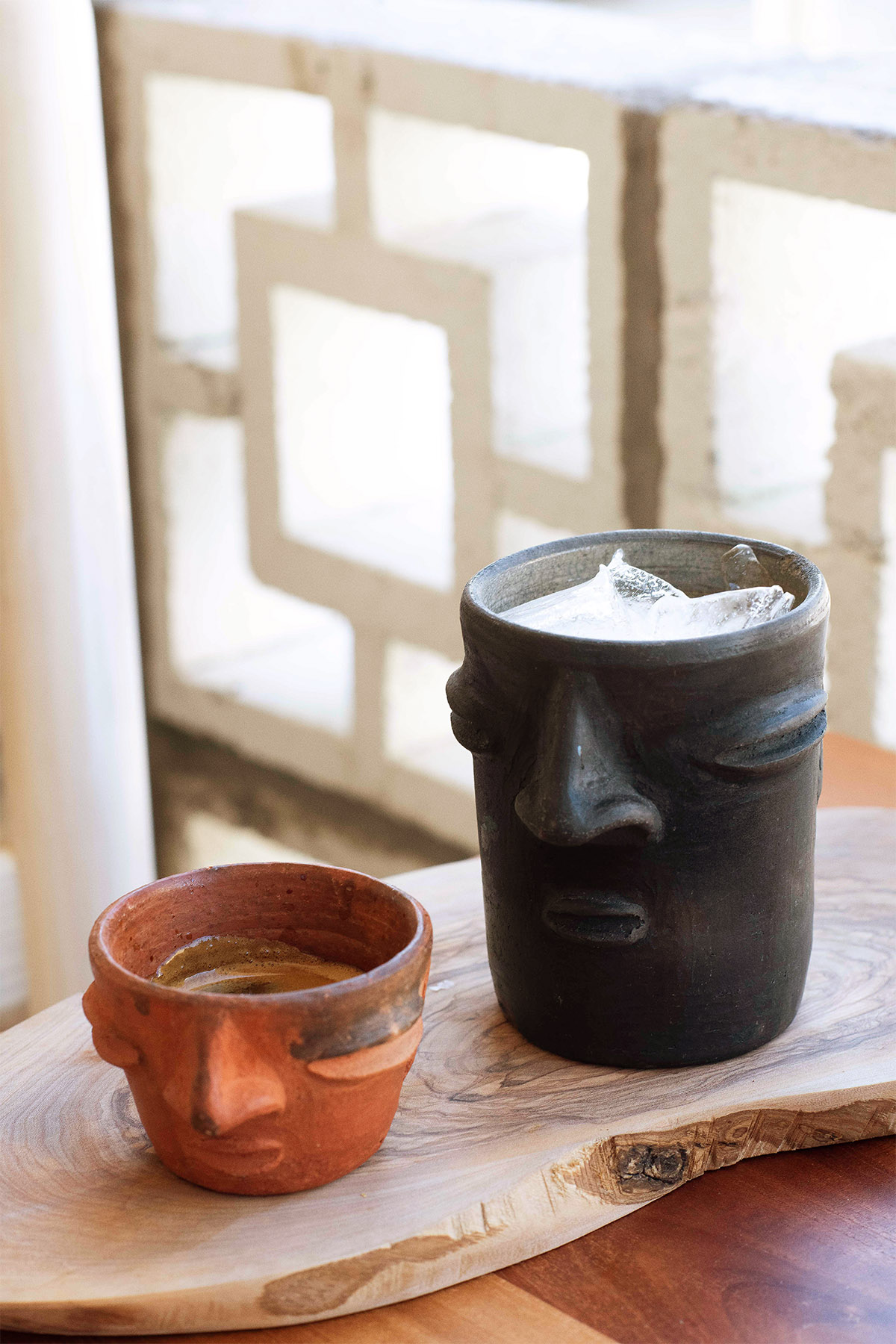 A caffeinated taste of Mexico

Both hot and iced coffee—an espresso horchata, perhaps—come in clay cantaritos, a nod to the Mexican origins and culture of coffee drinking. Come for the buzz, stay for the chilaquiles at brunch.

Nerd out about coffee

The Durham-based roaster is prolific among the Third Wave cafes that often boast about five different ways to brew your beans. Now Deep Ellum has a training center where you can learn (and taste) all about it. 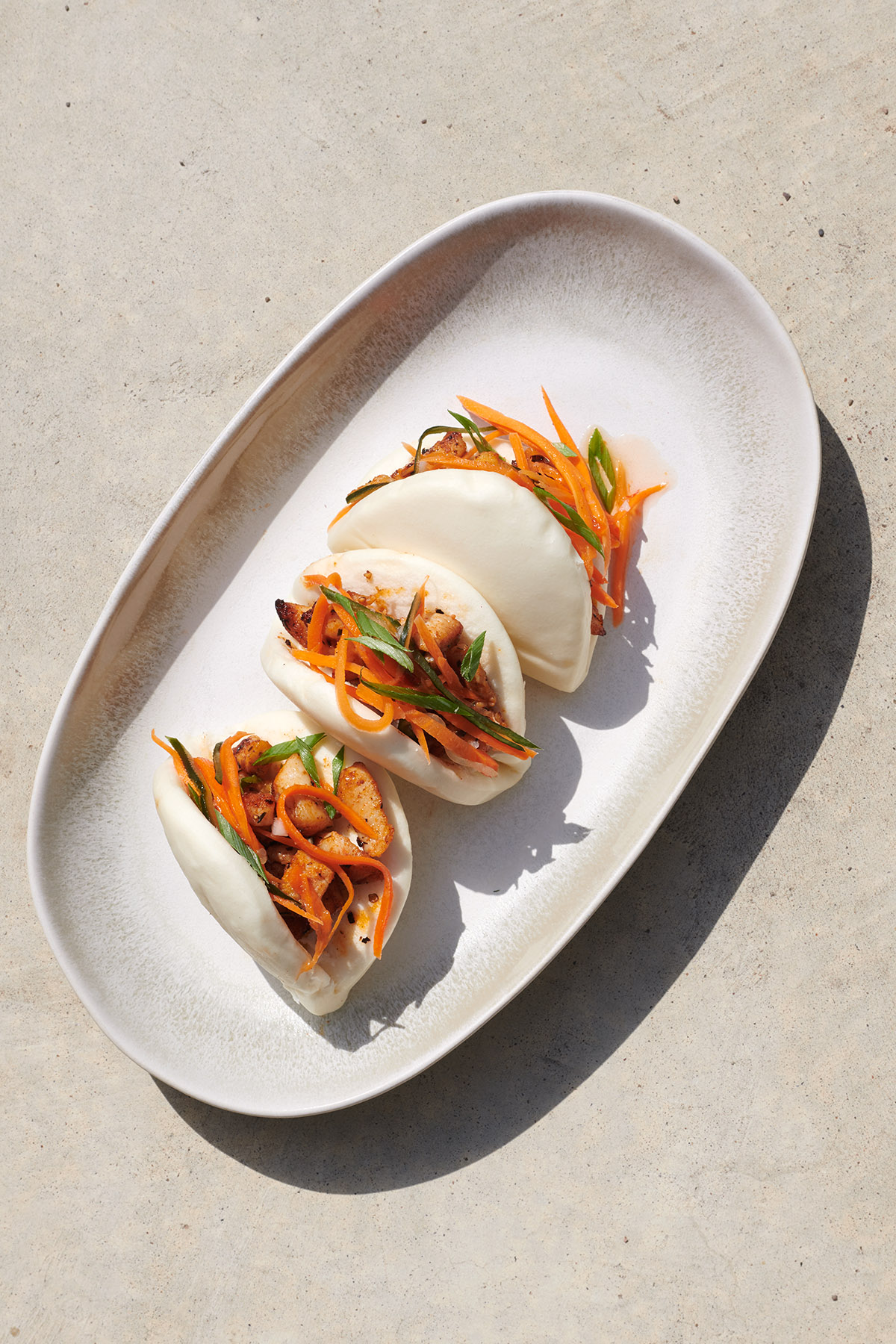 Got Buns, Hun: At Krio in the Bishop Arts District, co-owners Dan Bui and Connie Cheng fuse Asian and Cajun flavors. Their baos are stuffed with chicken, andouille sausage, or shrimp, and topped with pickled carrots and Sriracha aioli.
Elizabeth Lavin

The crossroads of Asian and Cajun

No one has ever felt cute digging into a seafood boil—this is a universal truth—and yet at Krio, blush rosés and pitch-perfect old-fashioned made with Oak Cliff whiskey suspend the reality that you’re elbow deep in clams and crab legs swimming in garlicky, Cajun-spiced coconut sauce.

A Dallas educator-turned-culinarian, Adriana Soto-Vazquez is on the forefront of vegan Mexican cuisine. Her family’s recipes from Durango become plant-based, like the ever-trendy birria tacos with chile-stewed jackfruit as its meatless star. The vegan pozole rojo doesn’t disappoint.

This utterly of-the-moment Preston Center wine shop and bar has a restaurant-worthy by-the-glass list and a kitchen that stands up to the vino. So you can nosh on olives, Spanish cheese, and truffle fries while sipping a pét-nat or a delicate Palo Cortado sherry. Pass the Marcona almonds, please. 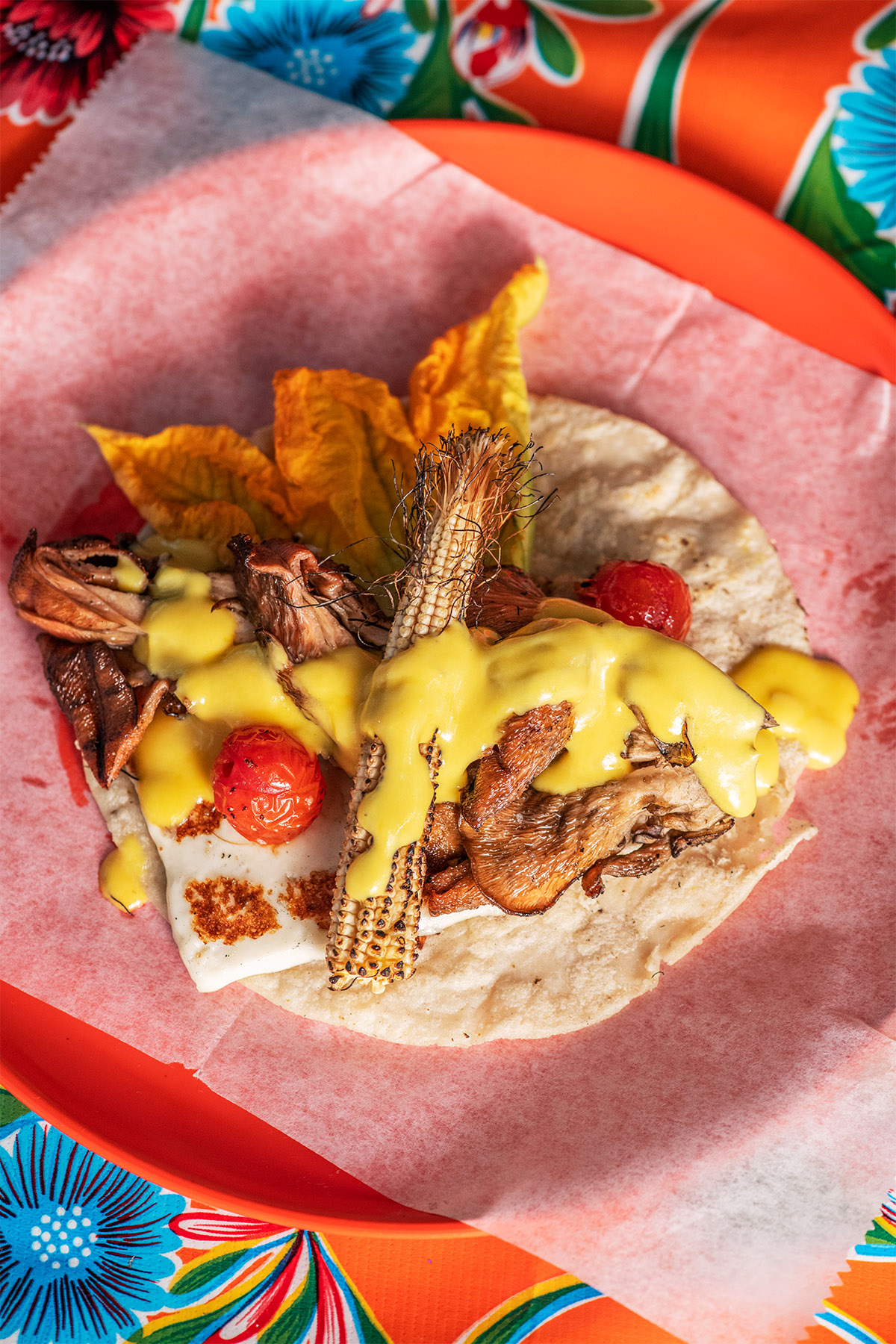 A tribute to maíz Mexicana

For his new concept inside Revolver Taco Lounge, Regino Rojas went all in on corn to create a multi-course tasting menu centered on indigenous strains he sources from Mexico, nixtamalizes, and grinds in a molino. Tacos sport wagyu rib-eye, boutique mushrooms, and exquisite sauces.

All our sweet needs were assuaged when La Casita opened a storefront this year to showcase its miracles of laminated dough, crackling cruffins, babkas, cakes, breads, and even whimsical weekly ice cream flavors. 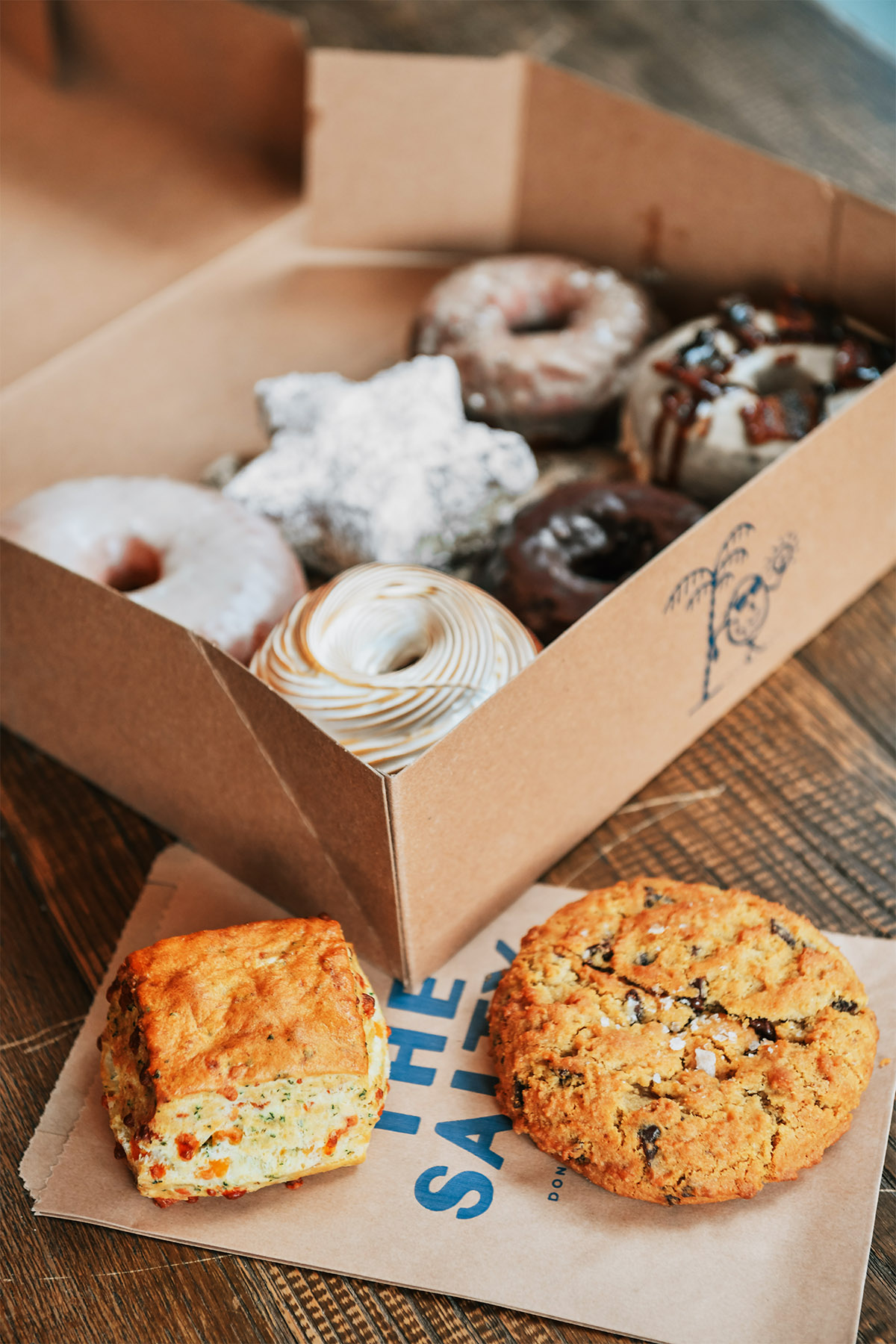 We whole-heartedly welcome this Miami export, meringue-crowned doughnuts and all.
Courtesy of The Salty Donut

Fried dough at its finest

The Miami-based shop landed in the Bishop Arts District, bringing fluffy brioche doughnuts in flavors like horchata with swirls of toasted meringue or the insanely good brown-butter glaze and Maldon sea salt.

Jennifer Dural has been perfecting her Filipino patisserie for years. Now she bakes batches of pillow-soft pandesal—plain as well as filled with sweet white cheese and ube jam—plus ensaymadas, a sweet bun harboring a dulce de leche center. 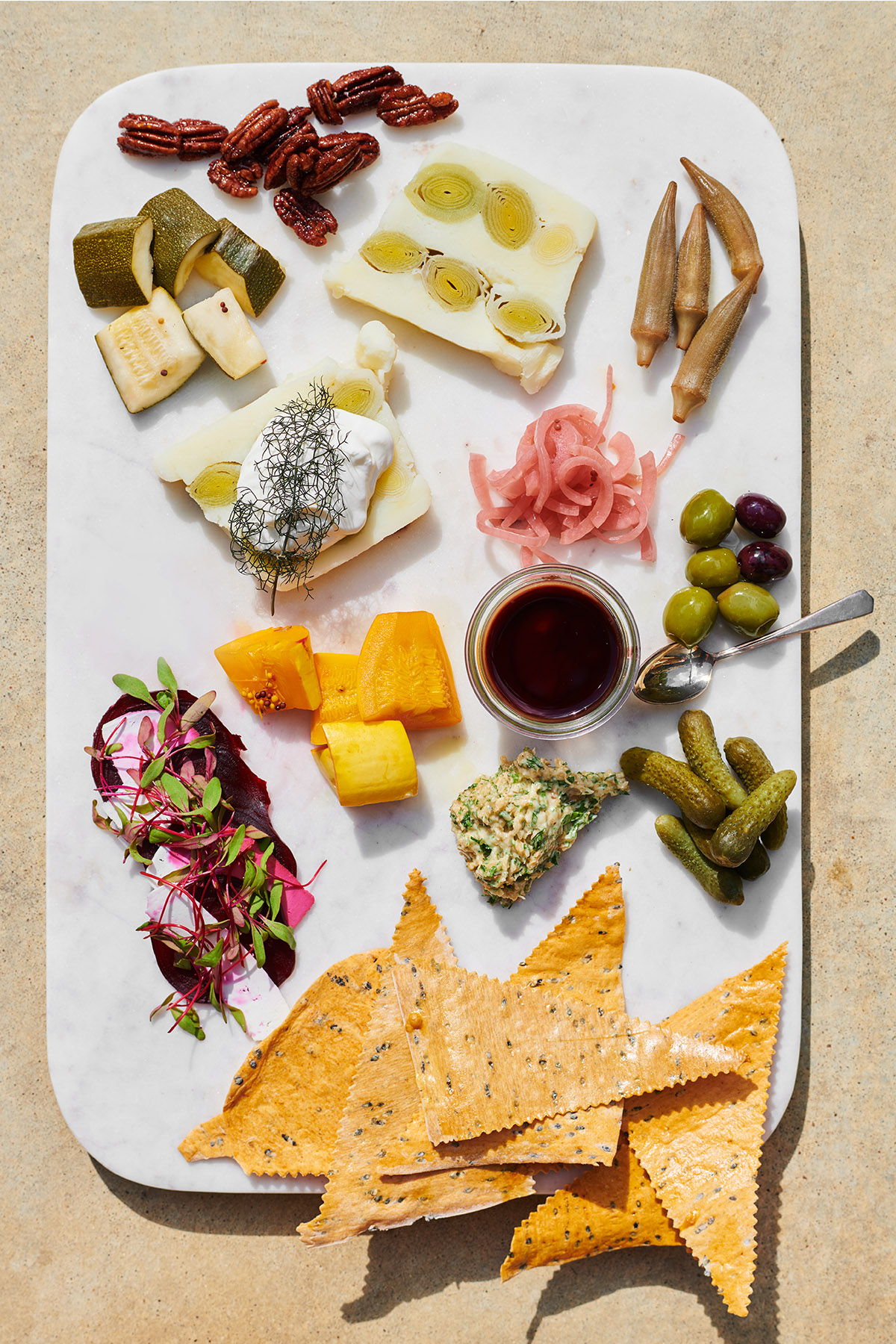 Graham Dodds is back at it with an elegant, noteworthy assemblage of what he does best, from the garden charcuterie board with sunchoke pâté and mushroom rillettes to the insinuations of farm and field in rabbit agnolotti. His brunch game is practically perfect. 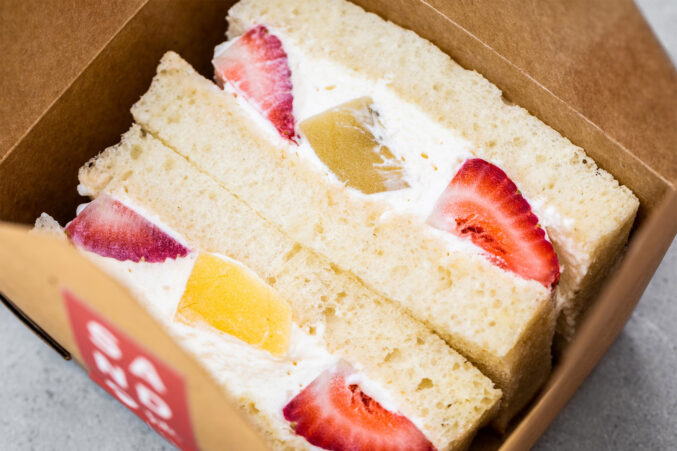 The buzziest pop-up in Dallas

The Japanese sando sensation arrived with Instagram-worthy fillings stacked between layers of fluffy milk bread. We were wild for matcha cream and strawberries; koji-cured chicken cutlet riffing on Nashville hot chicken; and the priciest sandwich we’d ever seen, featuring A5 wagyu flecked with gold leaf.

The menu with everything

Chef Kevin Ashade might be best known for his televised smackdown of food celeb Bobby Flay (yes, you can get the coq au vin that bested the TV chef). But Ashade’s French-honed skills shine across his globe-spanning menu of jerk-spice lamb shank, African jollof risotto, plus much more. 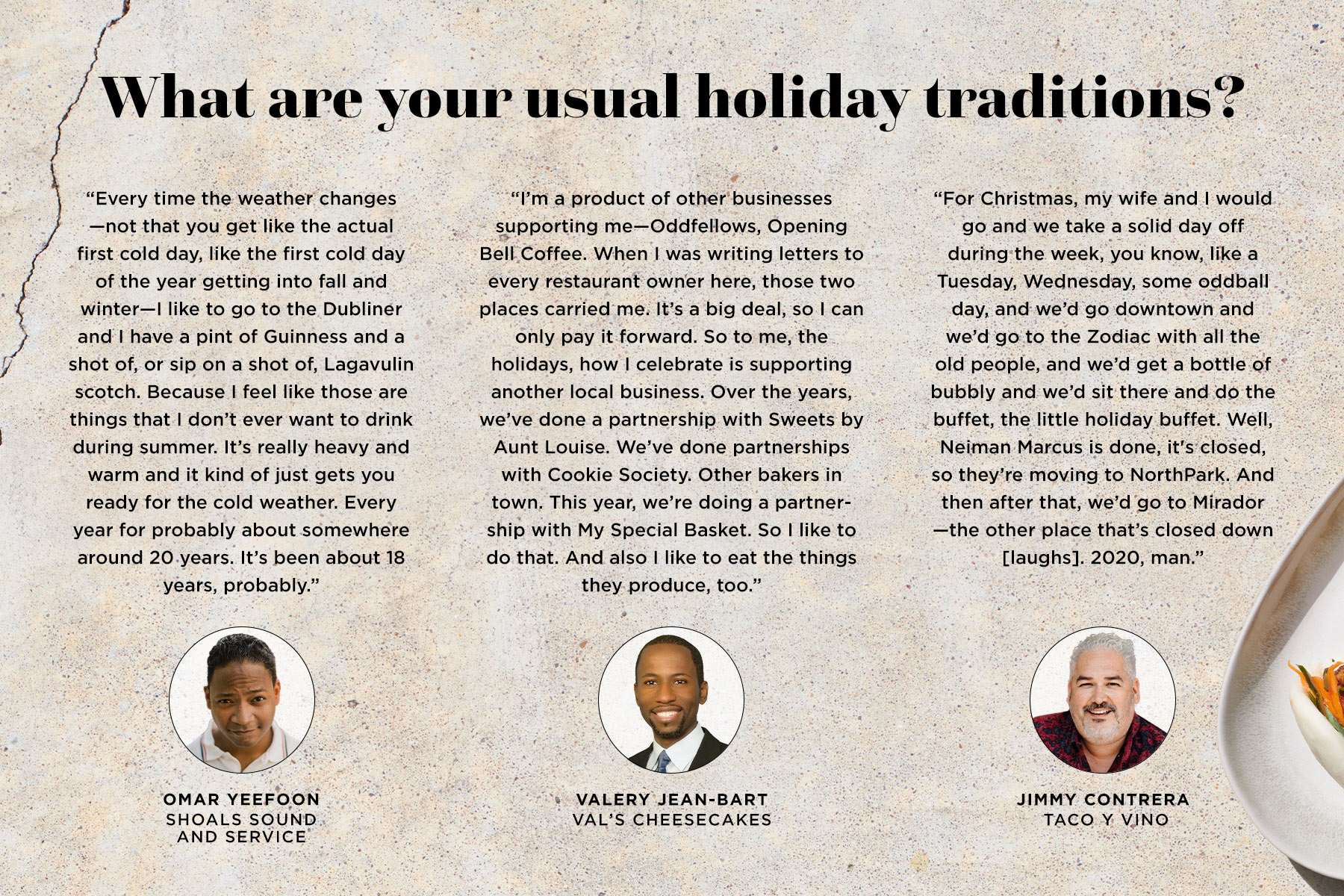 Chef Thanh Nguyen made a name for himself at Oishii. His latest venture ties his Japanese sushi skills with his Vietnamese background. Sushi-like spring rolls, topped with raw tuna, harbor delicate shrimp and tempura flakes. The smoked duck breast bánh mì with cognac pâté is heavenly.

This year, Zaap Kitchen expanded to now include a Fort Worth outpost and a second location in East Dallas. Their famous beef jerky, sizzling Lao sausage, and garlic riblets helped establish Dallas as a destination for Laotian cuisine. 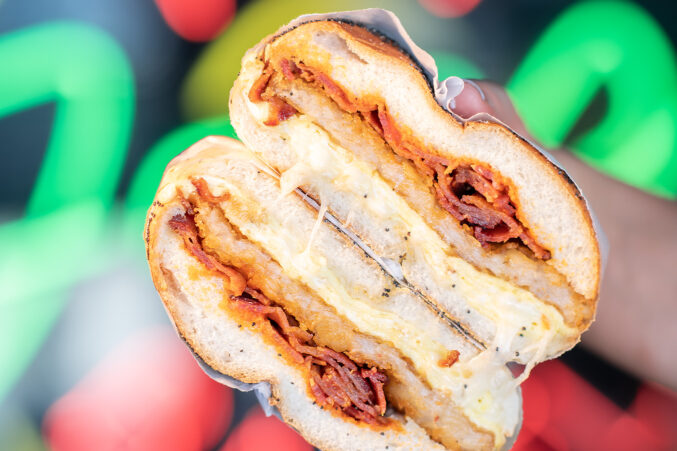 Justin Shugrue’s kettle-boiled bagels hold their own against any on the East Coast. Get a paper sack of the classics—poppy, sesame, everything, cinnamon raisin—or brave a kaiser roll stacked with bacon, egg, and cheese. Add a hash brown patty and spicy ketchup for good measure.

Behind Xamán Cafe is a hidden backbar where Mauricio Gallegos champions sotol, a distilled spirit native to Northern Mexico and parts of Texas. The cocktails are effortlessly sultry and balanced. You can, and probably should, sip on sotol straight up, to really taste the nuance. But for an easier introduction to the Mexican spirit, one of Gallegos’ cocktails will set you straight.

Your childhood favorites, but boozier

Kim Finch revived and revamped the historic service station across from her first bar, Double Wide, into a den of kidlike nostalgia, from Creamsicle-esque cocktails to sloppy joes. Thunderbird Station isn’t a “theme park bar” with a bag of tricks. Even if drinks inspired by old school ice cream treats aren’t your jam, the vibe here is cool, unpretentious, and just the right amount of car-obsessed. Plus, there is plenty of space on the outdoor patio. 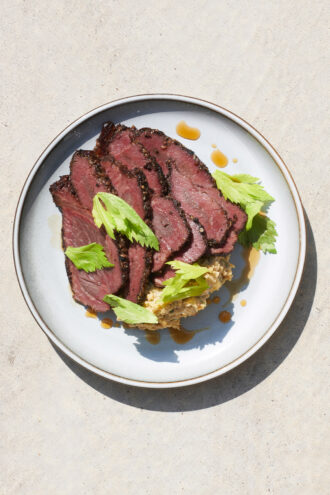 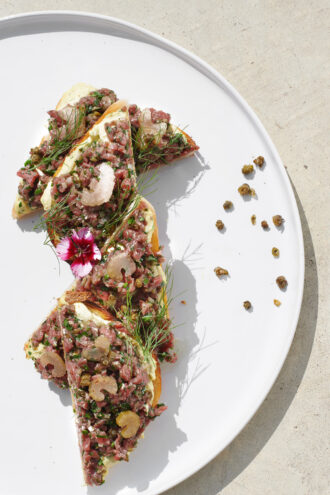 From farm to table to Oak Cliff

In this true-blue neighborhood restaurant, dishes take cues from parts of Texas and California as well as Southern cuisine. Here in the former Bolsa space you’ll find flavor-packed pastrami over pimento cheese, and mushroom gnocchi that’s like a vegetarian kindred spirit to chicken and dumplings.

This tucked-away “cocktaileria” feels like an escape to Mexico—to Tulum, maybe, or a hacienda’s hidden courtyard, where drinks made with sotol and mezcal are expertly crafted. But you’ll find yourself in Deep Ellum, in a bar with a roof open to the sky. 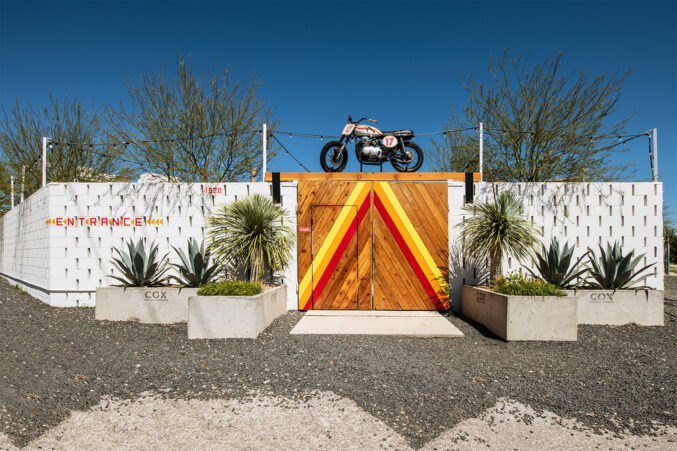 Nick Badovinus was the master of backyard pop-ups this year. Desert Racer’s back patio saw everything from fried chicken to burritos.
Elizabeth Lavin

The ballad of Badovinus 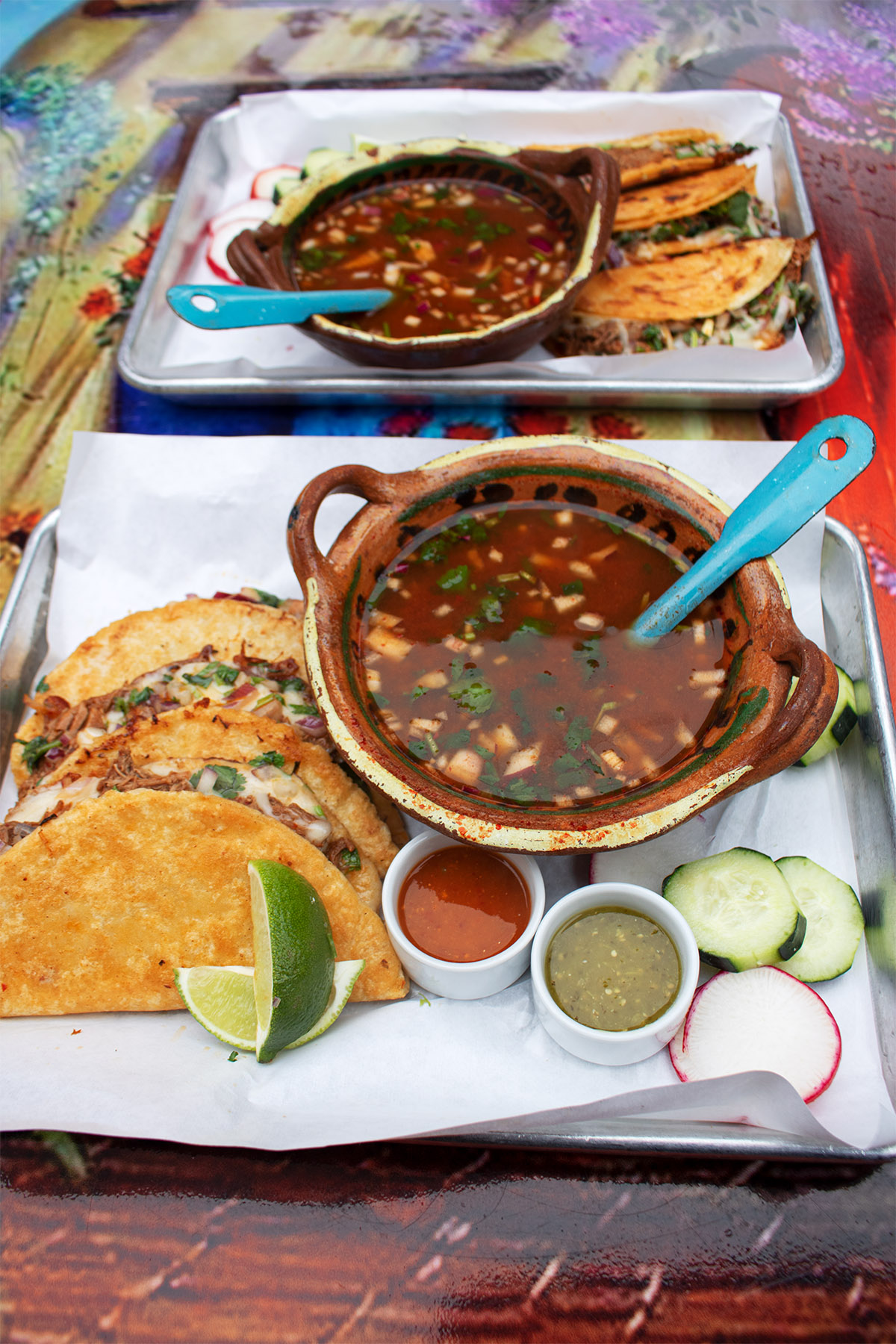 Trends, be damned! The quesabirria at Frida’s Tacos has us absolutely smitten.
Courtesy of Frida's Tacos

The art of quesabirria

At her first stationary restaurant, in the former Taquero location, Maria Barragan serves up the house specialty of quesabirria, her version of the broth-and-griddled-taco combination of birria de res. At night, the trompo stand and elotes cart reign on the spacious patio.

Stephanie and Brent Gilewicz branched out from their Milk + Patience yogurt line to make a mean sandwich at what we like to think of as their nouveau deli. The gloriously messy stack of sous-vide pastrami is served on marble rye made by artisanal kitchen-mates Bresnan Bread & Pastry. 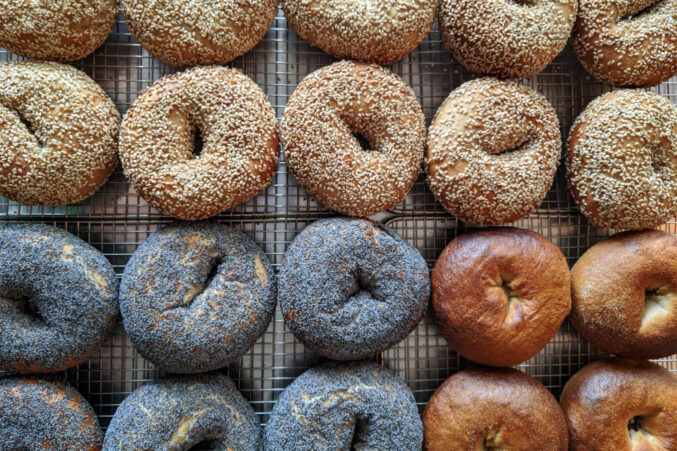 A better way to burger

Don’t look for a dainty burger here at this Old East Dallas spot. Halal beef patties are crammed with caramelized onions, jalapeño, and mozzarella, or perhaps strawberry jam and goat cheese, to make tall, hearty burgers that may make your jaw whimper but your stomach happy.

“Sweat-inducing” is not typically something one strives for in a meal, except when it comes to Nashville-style hot chicken. The fiery fried chicken that bears a red-barked, cayenne-spiced skin has found a welcome second home here. Leading the wave of likeminded newcomers was Dallas native Ricky Tran, who opened Ricky’s Hot Chicken in Richardson at the beginning of the year. In Old East Dallas, Lucky’s Hot Chicken appeared with a rotating signpost outside and a retro-styled design inside. Palmer’s Hot Chicken, which set roots in Lakewood, pays homage to the creator of the dish, Thorton Prince of Prince’s Hot Chicken in Nashville, which has had the whole nation hot and bothered since 1945. 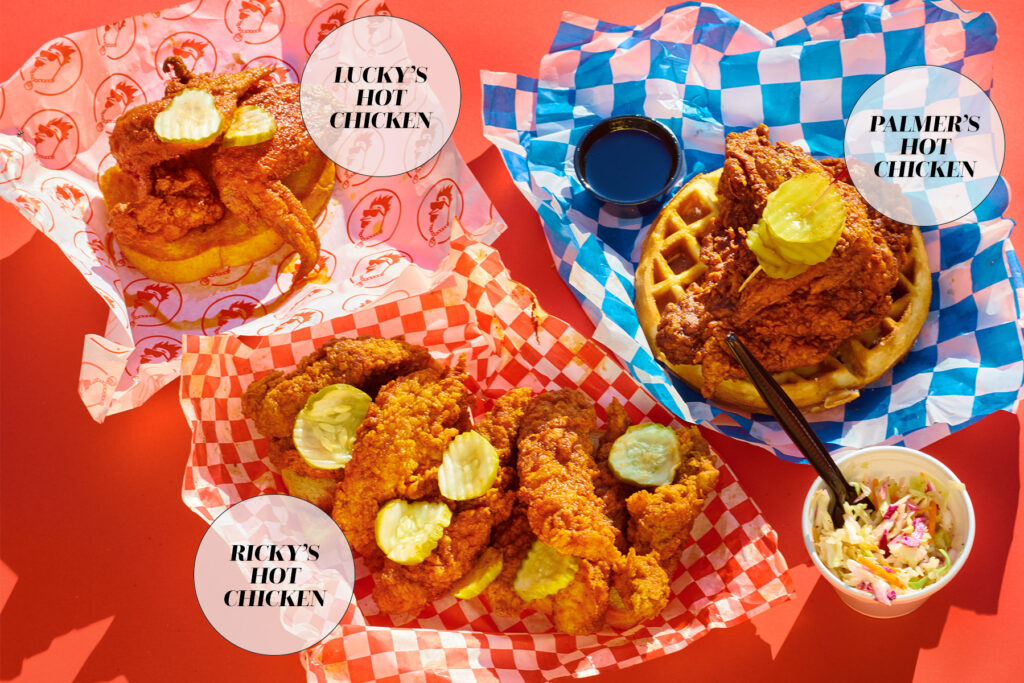 Three of the hottest things to fly into Dallas this year come in the form of fiery, crackle-skinned fried chicken—Nashville hot chicken, that is.
Elizabeth Lavin

Order a pitcher of frosé or a mint julep to start, then trade the white bread for a waffle and take your pick of white or dark bone-in meat. Oven roasted is an option, but why?

The A-bomb level packs a deadly combo of jalapeño, habanero, ghost, scorpion, and reaper peppers, so ask for a sample before you commit. If their creamed corn is on the menu, be sure to get it. 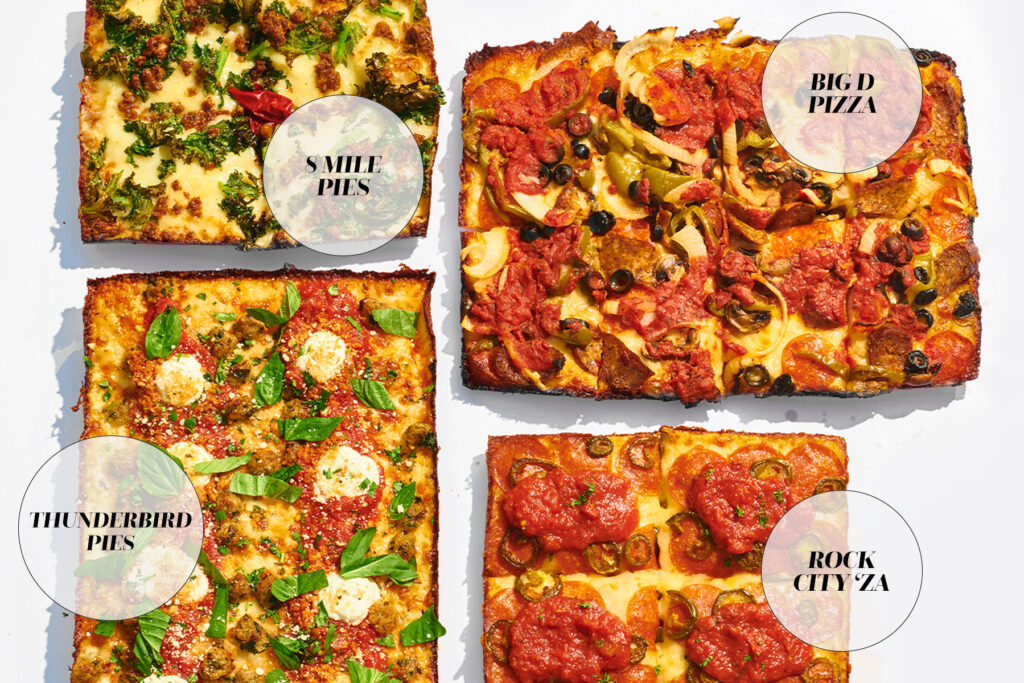 In a transplant city such as Dallas, Detroit pizza’s arrival was only a matter of time (and talent). We love this thick, square pie, and we ain’t lookin’ back!
Elizabeth Lavin

Detroit-area native Mark Slaughter has lived in Dallas for two decades. Like most transplants, though, he missed the quintessential foods of his home city. Namely, pizza. If thin, char-bubbled Neapolitan-style is the universal ideal, then Detroit pie is its American cousin—thick and square, covered with Wisconsin brick cheese that’s crisped all along its tall edges, and topped at the end with red sauce. Slaughter, who runs Rock City ’Za, isn’t alone in his determination to bring the Midwestern grub to Dallas. 8 Mile Pies is a prominent pop-up with a loyal following, and the pizza aficionados behind Zoli’s and Cane Rosso created Thunderbird Pies as a delivery-only experiment. Meanwhile, Peter Colombo, another Detroit native (who coincidentally attended the same Detroit high school as Slaughter), runs Big D Pizza out of his Alfonso’s Italian Restaurant.

The Luka Brasi (get it, you Mavs and Godfather fans?) comes topped with meatballs, dollops of ricotta, tomato sauce, and fresh basil. The labor-intensive work of Detroit pie means that if you want one from Thunderbird Pies, be sure to place your order when the online shop opens at 3 p.m.  And, trust us, it’s worth it.

Keep an eye out for pop-up pickup locations in Oak Lawn, Lake Highlands, Plano, and Frisco. The kale and Italian sausage is an unusual white pie flavored with garlic. But, oh our heart swoons for the pepperoni cup pie that boasts some heat and a light drizzle of honey.

Detroit pies almost always come topped with sauce and in one of two sizes: 8-by-10 or 10-by-14. As a Detroit native who knows his pie, Mark Slaughter says he only serves the 8-by-10 because it provides a better ratio of the best part: the crispy, crunchy, caramelized edges.

For the last couple of years, Peter Colombo has been quietly making the Detroit pizza of his youth in the kitchen of his Lake Highlands restaurant. His combo is a classic, with pepperoni, sausage, mushrooms, black olives, green peppers, and onions.