How Oncor Made a Killing at White Rock Lake

Oncor's clear-cutting at the Old Fish Hatchery was likely legal, but we the people still have recourse.
By  Jim Schutze | December 3, 2020|9:50 am

Subscribe
Advertisement
Once you hear the piercing wail of a person getting sudden bad news in the night, you know it for the rest of your life. That was the sound my wife made when I held up my phone to show her Facebook photos of destruction at the Old Fish Hatchery at White Rock Lake. Oncor, the electric utility company, had clear-cut 3 acres of wild, tangled sanctuary that was home to bird species, coyotes, foxes, beavers. Giant tree eaters had chewed up everything and vomited it back up as a dead yellow-orange mulch.

The nature area, which encompasses about 50 acres at the southwest end of the lake, is beloved territory at my house, though I can’t claim our connection to it is entirely legitimate. When our son, now 34, was a scrappy kid of 9 or 10 years old, he and his motley East Dallas buddies took shovels out there and made jumps for their bikes, much to the chagrin of the bird-watchers who had primary responsibility for protecting the place.

The hatchery, a matrix of shallow man-made ponds, now dried up, was built in 1930, the year White Rock Lake ceased being a drinking water reservoir and became a recreational lake. It operated as a hatchery until about 1936, when it was abandoned and fell into what most people would call neglect. But freed from the hand of man, the hatchery transformed into a realm of magic, mystery, and wonder hidden in the heart of the city. No human being could have designed or built what neglect created—a powerful assertion of nature, a splendid quilt of plants and trees, an invasion of birds and four-pawed creatures seeking a sanctuary from steel and concrete.

For our boys, it was Peter Pan’s Neverland. I was sort of a suspicious old cop of a father. I confess to sneaking out there a few times to make sure the lads weren’t taking shovels to bury loot from armored car heists. When I peered from behind trees, I saw sweaty, dirty little city boys working harder than anyone ever could have gotten them to work at home, flying through the air on bikes like juvenile hawks, exulting in the sheer absence of coaches, rules, flower beds, and, well, fathers.

When I thought I was at my most hidden, my son, with his back to me, said, “Hey, Papa, come over here and watch me do this jump.” Busted. But he never acted embarrassed. Good kid.

After the clear-cutting, in October, I spoke with Anna Palmer, president of Audubon Dallas, which has primary oversight of the hatchery’s acreage. She talked about the delicate balance that must be struck in protecting a fragile environment in a public place. “Because it is such a free-form place,” she said, “you can’t really fence it in to keep people out.” 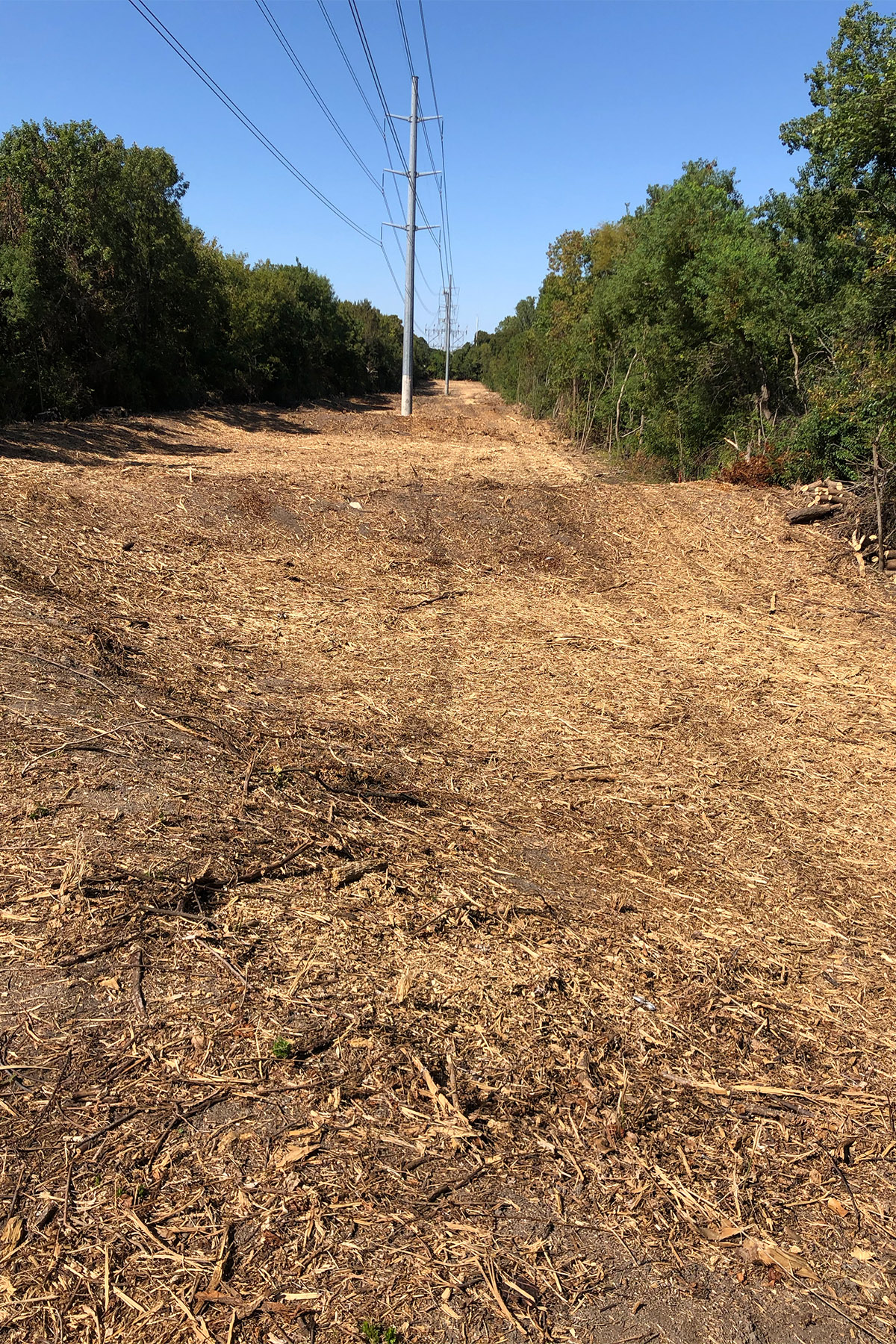 In a very real sense, what must be protected in the hatchery is the neglect. At one end of the spectrum, neglect can bleed into malignancy. What if the boys had come back with motorcycles? (Fat chance.) At the other extreme, however, fencing and policing and sprucing up the hatchery would ruin it. Holding a place like the fish hatchery at just the right balance is like holding a note in song. Not easy.

When the Facebook photos got out in October, Oncor reacted with arrogantly bland language. The company said it had removed “rapid-growing dense incompatible vegetation” using what it called “non-selective vegetation control methods.” Now there’s a euphemism for the ages.

In a written response to questions from D Magazine editor Tim Rogers, an Oncor spokesperson said, “Oncor recognizes the value in collaborating with local organizations such as local Audubon chapters as part of our continued environmental stewardship, and we’re committed to continuing to do so.”

If Oncor was trying to suggest it had consulted with Audubon Dallas before clearing the land, that was a lie. Palmer told me she could not have been more stunned by what happened. “What they did was so egregious that I’m still in shock,” she said.

But the mention of cooperation with Audubon is important here, because it indicates Oncor likely knew it had an obligation that it ignored. The 3 acres decimated are a right of way. Oncor, an electric distribution company here and in West Texas with annual revenues of $4.5 billion, owns those 3 acres. The rest of the hatchery belongs to the city. To get to its land, Oncor’s tree-eating machines had to drive straight past a 20-year-old sign declaring the land protected.

The company said it had removed “rapid-growing dense incompatible vegetation” using what it called “non-selective vegetation control methods.” Now there’s a euphemism for the ages.

Here, at this seam in the story, we get to the heart of it, the whole delicate business of a human agreement to protect neglect. That sign stands because 20 years ago, only a few years after my son got too big to play at the hatchery and before there was Facebook, this same thing happened. The same area was scraped. The earlier disaster produced an outcry and backlash from lovers and defenders of the Old Fish Hatchery, and out of their anger and activism was forged a clear moral accord. But to trace that agreement back through time, we need to detour into a bit of industrial history.

The history of the deregulation of electric power in Texas in the early 2000s is sort of like the history of the fall of the Soviet Union. Before it happened, there were all these huge quasi-public, state-regulated utility companies ruled by oligarchs. Afterward, in their place were all these big private companies ruled by oligarchs. Somehow the oligarchs from before and the oligarchs afterward turned out to be all the same people. Were we in on that?

In this case, the predecessor electric utility company was TXU Electric, and the oligarch who ruled it was Erle Nye. After TXU clear-cut the Old Fish Hatchery 20 years ago, Nye entered into a moral agreement that was rendered as a signed letter of intent by which he promised the despoiling would never happen again. When TXU needed to manage the plant life around its transmission towers, Nye promised, his company would consult with Dallas Audubon and other interested parties to ensure that the nature area would not be irreparably maimed.

In all of the baroque backroom politics of deregulation that followed soon after, Oncor emerged as heir to TXU’s transmission and distribution business, and Nye’s son, Allen Nye, emerged as the oligarch in command of Oncor. I do not think we were in on that.

But there is something in all of this that we the public in Dallas do own. We own that moral agreement protecting the Old Fish Hatchery at White Rock Lake.

Yes, it was only a letter of intent. No, it was not a binding legal contract. But the thing about moral agreement is that it doesn’t make any difference whether it has been lawyered or not, whether there is witnessed and notarized paper somewhere or if the deal was filed with the county. That’s not where morals happen.

Moral agreement happens in that other realm, the delicate balance, the note we sing and try to hold. Sure, you can sneer at a letter of intent and say there is nothing legally binding in it, but the people who struck the agreement still take it seriously.

P. Michael Jung, an attorney and member of the Dallas City Plan & Zoning Commission and the White Rock Lake Task Force, was involved in the dispute with TXU 20 years ago. He told me, “We thought, when we did this in 2000, we had a solution for the ages. Little did we know.”

Jung is angry. So are a lot of people. The new assault on the hatchery seems to make fools of them. They know that. But the way for them not to be fools is by holding hard to what they do have: the moral line.

It doesn’t matter that the new TXU isn’t the old TXU, that Oncor isn’t either one, that Allen Nye isn’t Erle Nye. The moral line goes straight back through all of that political and corporate stage setting, and the proof of it is the dishonest suggestion by Oncor that it somehow had consulted Audubon before doing this new damage to the hatchery.

Jung points out that the lovers and defenders of White Rock Lake Park have an impressive number of scalps on their wall. When the Dallas Arboretum tried to build a parking structure on delicate grassland at the lake, the defenders came up out of their neighborhoods like Davy Crockett to the Alamo and stopped that deal dead. They did the same thing when a former mayor pushed for a restaurant on Boy Scout Hill, at the northern tip of the lake, and they did it again when an elite rowing club wanted to build a floating pleasure palace on the lake.

A few weeks after the clear-cutting, District 9 City Council member Paula Blackmon created a citizen committee to advise her on issues related to the Old Fish Hatchery. There are some good, solid names on the committee and some troubling names. But it almost doesn’t matter. Even if the city lets this slide, as it does most things, the Crocketts will be out there.

Jung points out that Oncor does not operate in the part of the electricity business that is truly deregulated. Because Oncor inherited TXU’s transmission and distribution equipment, which it operates as a monopoly, Oncor still must submit to a state rate-setting procedure twice a year.

He certainly started wheels turning in my own head. Those people who have defended the lake in the past could afford to charter buses and go down to the rate-setting hearings in Austin. I’m sure normally the hearings are a dry, technical affair. But you don’t have to be an engineer or a lawyer to get up one after another and say you hate Oncor’s guts. You just go down there and do it, the way Oncor just eats trees. If anybody challenges you, you tell them you are using non-selective utility company control methods.

Write to [email protected]. This story originally appeared in the December issue of D Magazine with the title “Making a Killing.”