Seemingly far from her Beaumont, Texas roots, Tiffany Derry poses for a photo shoot in her Plano kitchen. The Top Chef contestant, restaurateur, and entrepreneur is poised this month to inaugurate an Austin branch of Roots Chicken Shak, her Legacy Hall fried-chicken mecca. And she’s set to open her ode to Southern food, Roots Southern Table, in Farmers Branch early next year. She is finally speaking in her own voice, though it took her a long time to get here.

Her childhood was anchored in Southern food. Derry recalls eating her grandmother’s watermelon rind preserves with homemade biscuits and figs fresh from the tree. Her grandmother, whom she describes as “a Louisiana Southern girl,” taught each of her 11 children to cook, and family potlucks overflowed with the flavors of her uncle’s pork, sweet potatoes, and caramel cake; her aunt’s potato salad and macaroni and cheese; and her mother’s red rice, greens, and extensive roster of sweets.

“Do you cook soul food?” people would ask when Derry set out at 18 to pursue culinary school and travel the world. The question irritated her. She wanted to be known as more than a Southern chef, and she chafed at the confines she saw imposed by the soul food label. “I was truly taught through words unspoken and spoken that Southern was ‘less than,’ ” she says. Those were things you ate at home, not dishes people would pay for.

Head to Roots Chicken Shak in Legacy Hall for the duck-fat fries that started it all, as well as Derry’s signature duck-fat fried chicken, which is available as wings, strips, or a sandwich on a sweet-potato bun with your choice of kale and kimchi mayo or West Indies hot sauce. Add sweet tea and banana pudding for a true taste of the evolving South. 7800 Windrose Ave., Plano. 972-846-4255.

An ambitious chef, she reached in different directions, replacing the intangibles of the Southern repertoire with the tangibles of French, Japanese, Italian, Chinese, Korean, and Latin American techniques. She started learning from other grandmothers, but even as the nonnas in Italy taught her to feel the readiness of the pasta dough, gauging the pressure as she pushed down, she was reminded of her grandmother making biscuits, intuiting humidity and temperature. Making kimchi reminded Derry of the pickling and preserving of the South. Without wanting to, she was seeing connections, circling back to traditions she cared about that might be lost if chefs didn’t claim them. And so began her slow reawakening to soul food.

The seminal moment came less than a decade ago, with the inauguration of Private Social, the tony Uptown restaurant that Derry opened as executive chef in 2011. There, she turned the bistro notion of crackling duck-fat French fries into the duck-fat fried chicken that would become her trademark. “Private Social was the start of me using my voice,” she says. “Not being afraid to put out that chicken I was afraid to put out there all my life.”

She is not afraid to say that her journey has been, and is, complicated. When it came to owning a restaurant, the Black woman chef who had appeared on more than half a dozen television shows found that de facto discrimination by investors was another form of silencing. She remembers a particularly emotional Top Chef episode that involved filming on Ellis Island. Amid other contestants who discussed their heritage and genealogy through voluntary and recorded channels, she could only say of her own known origins: “Louisiana and, before that, Africa.” 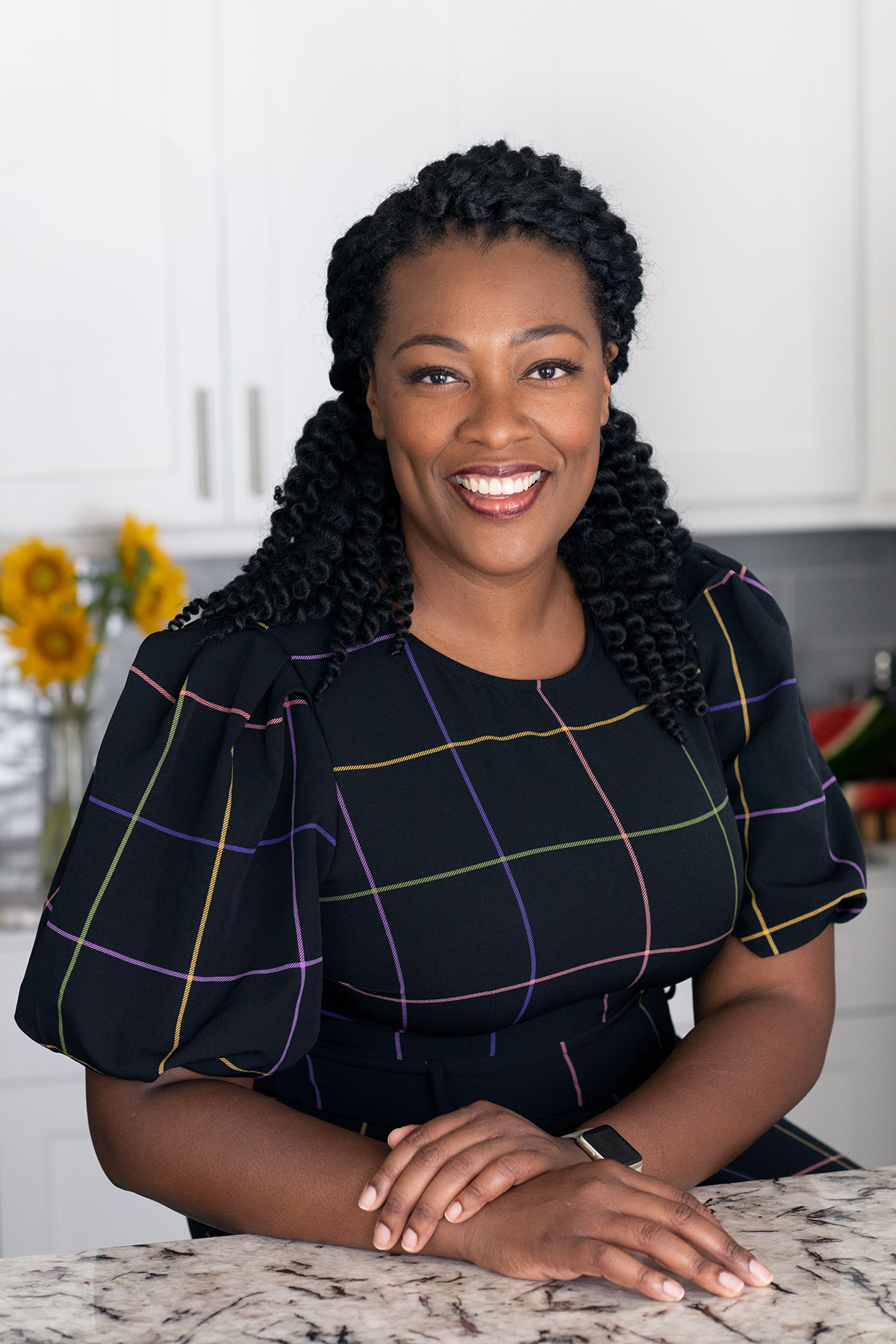 Pull Up a Chair: Derry is grateful for others who tell the stories of Southern food, like her friend Carla Hall, author of the popular Carla Hall’s Soul Food. There’s room for more voices, Derry says.
Elizabeth Lavin

For Derry, cooking is a way of reclaiming and better understanding that lost history. “I didn’t grow up with West Indies [spices],” she says. “I didn’t grow up with hot Caribbean food. I didn’t grow up even knowing what jollof rice was.” As she studied, she learned more and more of the African aspects of the cooking she’d grown up eating. “We may not call it those things,” she says, “but that’s where it came from.” Now, what she has learned about soul food—its West Indies inflections and its indebtedness to West African rice culture—informs her understanding of Southern cuisine as a broad, rich, and complex tapestry that runs from its African roots to its modern expressions.

“At the time, it was just me wanting to get back to my roots, what I experienced growing up with food,” she says. “But now I look back, and I can say that our food is beautiful. Our food is one of the original foods of this country. Southern food was created here in America. We had the Africans coming in and the influences of all the different produce. Here in the South, it was created. How can you not be proud of it? How can you not be proud of one of the founding cuisines of this country?”

She wants what she serves at Roots Southern Table to reflect and honor all of this. Her grandmother’s watermelon rind preserves and buttermilk biscuits. Kimchi-style pickled greens that reflect a Korean method of preserving. And also a pea salad whose snap peas and pea shoots, deviled egg, and fresh herbs—all sly updates—take into account a celebrity chef’s artful leanings, offering a new take on the traditional scooped pea salad that links novelty and nostalgia.

“I want to cook my Southern food,” she says. “I don’t want to be boxed into what you think. My Southern is going to be from the farm. It’s not going to be all fried.”

Roots Southern Table, Derry hopes, can be one way of working toward a broader understanding of the South. “I don’t really care that you know that I can make sushi. Those were things I cared about before,” she says. “Roots is about my roots and all of the things that I grew up eating. All the things I love. All the things I would like to pass off and give to the world.”