Two years ago, after seeing yet another news story about police brutality against a black man, NeAndre Broussard had had enough. He founded his Instagram page, Black Menswear, to counter negative media portrayals with images of black men dressed in colorful, impeccably tailored suits. The proof of his concept was evident at our photo shoot in The Shag Room at the Virgin Hotels Dallas. Passersby kept stopping to comment on how good he looked, and it was clear that they figured he must be someone of import. That’s Broussard’s hope: to change reality by changing perception. In this case, with a double-breasted windowpane suit from his new BM & Company suit line.

NeAndre Broussard first went viral a year ago in February, with a photo he had staged in Deep Ellum of a stylishly suited flash mob fronted by an unsmiling 6-year-old boy. The men are slightly blurred in the background. The boy is in sharp focus in the center of the frame, wearing a tiny turquoise suit with a pink carnation tucked in the lapel. He looks into the camera and holds up a single fist, exposing a starched French cuff. 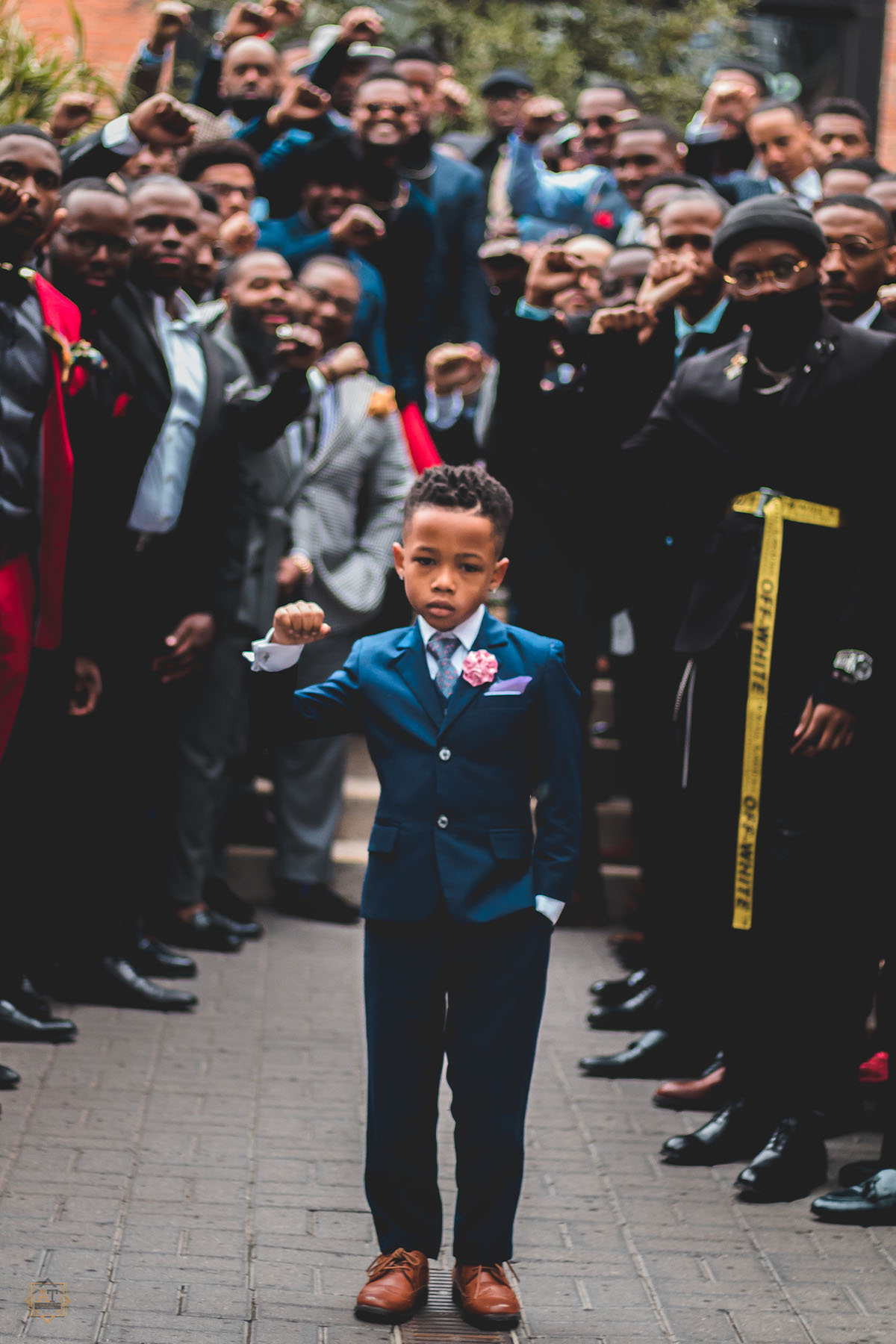 Common, Diddy, Reggie Bush, Tracee Ellis Ross—even the online celebrity news site The Shade Room—all started sharing the photo. But it wasn’t planned, at least not the inclusion of the boy, Harper. A friend of a friend’s wife, who was visiting from Chicago, asked to bring him to the shoot at the last minute. Broussard had staged similar flash mobs before, but the emphasis had always been on the grown-ups.

Tired of police brutality against men who were presumed to be aggressive solely because of the color of their skin, the SMU graduate and insurance businessman created his Instagram account, Black Menswear, to change the narrative. He started gathering large groups of black men in suits, sometimes organized around a color theme. For the first shoot in Dallas, 20 men showed up. Then 75. Then 100. When he would travel to Philadelphia or D.C. or Chicago for work, he would put up a post and hundreds would show up in those cities, too.

On the day of the Deep Ellum shoot, Dallas photographer Santos Paris spotted Harper and asked him to stand in front of the group. “I told him to raise his fist,” Broussard says. “But how he took it, that was all him. As we like to say, he ate that shot. It was lunch.”

The reason the image was so impactful, Broussard believes, is because Harper was the only child. “You have 99 men behind him, to where it’s like a support system,” he says. “It spoke to so much more than just a picture of a young boy wearing a suit. It was, It takes a village to raise a child. It was, We all got your back. It was, You can do whatever you want because we stand behind you. That one, it took Black Menswear to the next level.”

“It spoke to so much more than just a picture of a young boy wearing a suit. It was, It takes a village to raise a child. It was, We all got your back.”

Now, Broussard speaks to kids of all ages, talking to them about the importance of appearance. He advises them on what to wear to a job interview, how to tie a necktie, and how to press a shirt or suit themselves if they can’t afford to go to a dry cleaner.

He has flash mobs planned in 12 cities this year, and at each one he’ll host a networking roundtable beforehand that he calls Dapper Conversations. Through these events, his goal is to impact 1,500 additional lives and to create a nonprofit suit bank to which his flash mob participants can donate.

In March, he launched a suit line called BM & Company. The suits are made to measure, allowing for a custom fit at an affordable price. His spring line includes six options, three solid and three windowpane, all of which have functioning buttons and are made of 100 percent European wool.

“Suits are longevity,” Broussard says. “People are always going to be wearing suits. You go look at pictures from the 1920s, and you look at a picture from 2020. One thing that’s consistent? Suits.”

For Broussard, the clothing is really a means to an end. The suits are about looking good, but in the long run, they are about saving lives. “At the end of the day, for me, it’s not about the dollars,” he says. “It’s about the impact.” 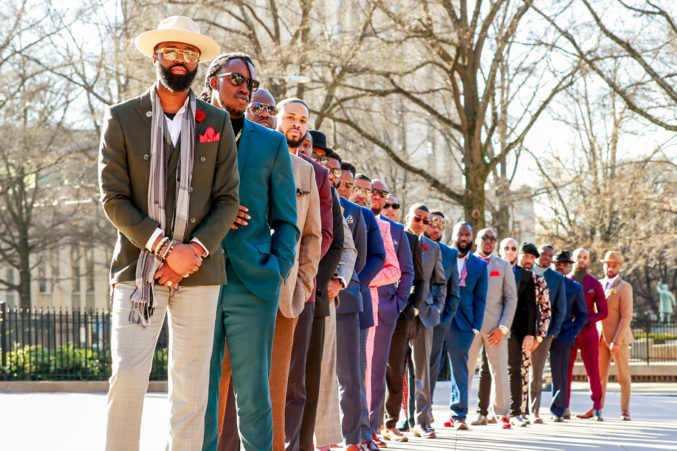 Stronger Together: Broussard has staged flash mobs around the country, from Dallas to Atlanta (above).
Kendal Lanier

Get it tailored. “If I’m not in a position to buy that expensive suit but I still have the urge to buy one, I go for off the rack and take it right to my tailor. Make it your suit.”

Follow the button rule. “Your bottom button is never, ever, ever buttoned. You stand up, you button the top button. You sit down, you unbutton your jacket.”

Have a go-to power suit. “It’s like your superhero costume. Some people have lucky underwear, or athletes have lucky socks. I’ve got lucky suits. I know I look good, so the mental battle is already done.”

Use your accessories. “For those who like color but are nervous about wearing a colored suit, let your accessories be that voice. Wear your conservative suit, but then use your tie, pocket square, watch, or belt to be your voice.”

Invest in the shoes. “I may get a suit for an affordable cost. But the shoes? That’s something that I’m going to invest in because I walk. You might wear the same shoes with four different suits, so you want a shoe that you don’t have to go and buy a new pair in six months because you wore it out.”