In the fall of 2017, Dallas writer David Searcy drove South Korean novelist Jung Young Moon down a country road just outside Corsicana. It was Moon’s first time in Texas. For a few months, the author would live at 100 West, an artist residency located in a three-story brick building that was once an International Order of Odd Fellows lodge in the small town’s historic downtown. The residency offered Moon a chance to see a new part of the world and have plenty of quiet time to write. A few days after touching down in Texas, however, Moon, who lives in Seoul, was suffering from culture shock.

Moon had told Searcy’s wife, the artist Nancy Rebal, that he failed to find anything interesting in the little Texas town. Now Searcy was taking him to see something distinctly Texan, which he hoped would pique Moon’s interest. The two piled into a pickup and drove to a ranch where a herd of African Ankole-Watusi cattle grazed in a wide-open field. The animals had long horns that curved high above their heads like halos. In the middle of the field sat an odd object: an Apollo lunar landing module—a test model once built for NASA.

Seven Samurai Swept
Away in a River 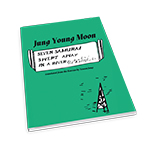 In his new novel, Seven Samurai Swept Away in a River (Deep Vellum, November 2019), Moon writes about encountering this odd scene. He wonders what the farmer thinks about opening his curtains each morning to see the absurd juxtaposition of the object and creatures in his yard. He remembers stories about the dogs and cats that, in the early days of space exploration, were strapped into rockets and shot into outer space. He wonders if the farmer had hoped to build a kind of theme park, only to conclude that the capsule and the African cattle were entertaining enough on their own. Finally, Moon believes he has found a straightforward, poetic meaning behind the scene.

“The message was simple and the answer lay in the cattle, which was roaming around the capsule as if to say that it was ready to go to outer space in a capsule and all that had to be done was to send it on a rocket to outer space.”

Such deadpan interpretations of reality abound in Moon’s new book, which is among the more singular and peculiar novels about Texas and Dallas you will ever read. Moon has a cult following in his home country. His writing has been compared to Samuel Beckett’s in the way that it is self-aware and self-effacing, and its narrative threads never tie together into anything that might resemble a traditional story. Instead, his self-conscious musings continually remind the reader that what they are reading is a work of fiction. As one reviewer put it, as we follow Moon’s free-associating narrators, “we wander through the closets of their consciousness, watching them pick at loose threads, unraveling their worlds and themselves like old clothes.”

In Seven Samurai, Moon unravels the world of Texas and Dallas, recasting the familiar as alien and allowing readers to re-encounter this city and region through the eyes of a narrator who is disoriented by its otherworldliness. There’s the dust-covered lady in an antiques mall in a ghost town near Dallas who sells him a book about ghost towns near Dallas. There’s speculation about what the world would have been like if Karl Marx had given up on the European worker’s struggle and moved to Dallas to be part of the La Réunion colony. There’s a retelling of the assassination of John F. Kennedy with a fixation on a forgotten and rather odd detail: when Jack Ruby went inside the Dallas Police headquarters to shoot Lee Harvey Oswald, he left his dogs in the car. Moon writes about how Bonnie and Clyde fell in love over a cup of hot chocolate and wonders if the hot chocolate was more important to the outlaws’ story than historians give it credit.

As with the NASA capsule and the African cattle, Moon’s imagination is drawn to innocuous paradoxes and unearthed absurdities, and he is carefully attuned to the way in which these kinds of encounters offer moments of breakthrough or inspire existential befuddlement. It is this characteristic of Moon’s writing that makes the context of his latest novel—and his residency at 100 West—seem as integral to its creation story as Bonnie’s hot chocolate and Ruby’s dogs are to theirs. 100 West, after all, is both the reason for and the setting of Moon’s interstellar travels in Texas.

Such deadpan interpretations of reality abound in Moon’s new book, which is among the more singular and peculiar novels about Texas and Dallas you will ever read.

The residency was founded by a handful of Dallas artists in 2012, and, in a few short years, it has grown in both reputation and reach, with artists and writers from around the globe gathering in the creaky old Odd Fellows hall to work. 100 West’s appeal for creative types lies in the location’s isolation—an hour south of Dallas, in a city with a population of about 23,000 where, from the roof of the residency, you can see the edge of human settlement and, beyond that, an endless stretch of empty prairie bending gently toward the horizon.

On a hot and bright September morning, I meet co-founder Kyle Hobratschk at the space. Hobratschk looks a bit like the British actor Ben Whishaw—both studied and puckish, with charismatic eyebrows. After he bought the building from the widow of Dallas artist Doug MacWithey, who had used it as a studio and has since died, Hobratschk began luring his artist friends from Dallas and crafting “Shop Corsicana” placards to distribute to local shopkeepers.

Hobratschk’s enthusiasm for the town is shared by Searcy and Rebal, who help with 100 West and also split their time between Dallas and Corsicana. Rebal has been buying up other spaces around town with hopes of turning them into artist studios, art spaces, and extensions of the residency. They imagine a future for the early-20th-century oil boom town as a kind of artists’ colony, where the quaint trappings of Americana (Corsicana is most famous these days for its fruitcakes) rub up against the endless expanse of the Texas prairie to create fertile ground for inspiration. A few publications have gone so far as to label Corsicana the “new Marfa,” but Hobratschk winces when I bring up the comparison.

The residency prides itself on shirking convention and commercialization. Artists and writers come in groups during the spring and fall and stay in minimalist accommodations that can be described as monastic, if not downright Spartan. Hobratschk has preserved the building’s somewhat mummified condition, with peeling paint and closets stuffed with forgotten old Odd Fellows paraphernalia. The kitchen and bathrooms are shared, and the large studios are appointed with stern wooden twin beds and dressers or wardrobes.

The ways in which this isolation presses in on residents’ imagination are reflected in Moon’s novel. Alone in Corsicana, with only Searcy, Rebal, and their dogs for companionship, Moon finally gives into the pressures of fiction and invents characters—a troupe of seven samurai—to accompany him on his wanderings. The seven samurai appear like a mirage and in black and white, like a Western film. Moments later, they are swallowed up by a tempestuous Texas river that “joyfully” overflows its banks. The samurai, however, keep returning, accompanying Moon as he walks one of Searcy and Rebal’s dogs and attends his first Thanksgiving dinner.

By the time they appear in the novel, Moon’s samurai seem no less absurd or out of place than anything else in the book—Jack Ruby’s dogs, the NASA capsule, Bonnie’s hot chocolate. Moon finds that his samurai, like the author, are strangely at home in a place like Texas, which the visitor has found to be full of things that are “utter nonsense, but wonderful.”

7 For All Mankind Party at NorthPark Store

UT Dallas Researchers Help You Listen to the Apollo Missions