The artist is still drawn to the story of his grandfather, who arrived in this country naked and with nothing at all.
By Kathy Wise | May 1, 2019|11:30 am

Subscribe
Advertisement
Ben Muñoz is wrestling a 62-by-32 woodblock off of a printing press when I walk into Paper Arts, a specialty paper store and print studio on Peak Street. Owner Terri Thoman has offered up her largest Conrad press to accommodate the work, since Muñoz’s own press at his small studio in the Goldmark Cultural Center won’t do.

In his black beanie and Vans, the 25-year-old looks like he would be equally at home in a skate park. (A line of t-shirts he designs under his Casa Press label is sold at skate shops like Rec Shop in Dallas.) But the art world suits him. He just completed a series of six wooden panels, 8 feet tall and 4 feet wide, that have been on display in his hometown at the Art Center of Corpus Christi since the beginning of March. The “Endless Endeavor” series took him more than a year to complete. Each panel represents a different chapter in the evolution of Muñoz’s family, from the emigration of his paternal grandfather, Alberto, to the birth of his daughters, Jane and Florence.

“Ever since my grandfather passed away, a lot of my work has been about him,” Muñoz says. “He came from Mexico City when he was almost my age. He was really talented; he did carpentry work and would make cabinets. But he noticed that nobody had Saltillo tile anywhere in South Texas. He was like, ‘I bet I could make a killing bringing in Saltillo tile.’ That’s what he did. He started this tile company and it exploded.”

A new panel that Muñoz recently finished pictures an elephant balanced on a ball that is perched on a marquee sign that is resting on a boulder. The boulder, he explains, represents his grandfather, the family’s bedrock. The elephant in the room, as it were, represents the family’s current conflict. Some want to focus on his grandfather’s business success, which ultimately included an architecture degree and firm; others want to acknowledge how he got there.

“He told me that when he came to the United States, that he had tried to cross like 10 times and they kept sending him back over and over,” Muñoz says. “The time that he finally made it through, he took all of his clothes off and he wrapped them around his hand, because when he came out on the other side, he wanted to be dry so he didn’t look like he had just swum. The current was so strong that it swept his underwear off. He came into this country naked, almost like he was being born, and he started with literally nothing. And when he died, he had more than most people who were born with way more.”

Muñoz adopted Alberto’s work ethic and familial priorities. He met his wife, Juliana, in school in Dallas the same year his grandfather passed away. They moved to Corpus Christi to work for a bit, but when Juliana became pregnant with their first child, they came back to Dallas to be closer to her family. He now earns a living as a full-time artist. A set of six prints from his limited-edition “Endless Endeavor” series sells for $30,000; large individual prints sell for more than $5,500. In addition to his exhibition in Corpus Christi, he also has upcoming solo shows in Dallas at the John H. Milde Gallery and at Hecho a Mano in Santa Fe.

It is only as I finish the interview and watch him wrap a used woodblock in paper that I realize he is missing several digits on his left hand. When I ask him about it, he tells me he was born without the fingers, and that he considers that a blessing, as opposed to losing them later in life, when it would have been harder to adapt.

“I tell my wife that I actually want to do this series of woodcuts, but I’m probably never going to do it because it’s too vain,” he says, laughing. “I wanted to do a series of almost Biblical carvings of me, in heaven, with like a David-type body. I’m 7 feet tall and have 10 fingers. But as God was creating me, he realized this is too powerful of a person. So he took my fingers away and took inches off my height. Then he sent me down to earth, so that everybody else would have a chance.” 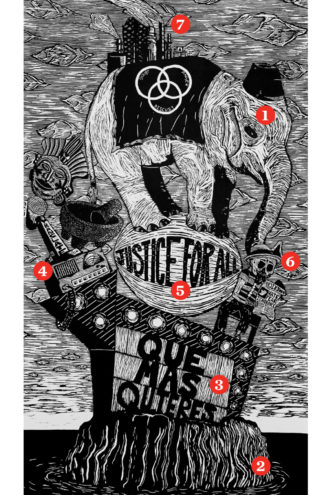 1. “The print is about my grandfather at the bottom and then living generations that are conflicting with each other. It represents the elephant in the room—some kind of unresolved conflict that I’m having with different sides of my father’s family. It’s almost like everyone’s kind of been split in half, which is kind of like a larger picture of America right now.”

2. “When my grandfather was alive, he was a very strong man. He was like the rock of the family, the foundation.”

3. “This is something he used to say when we would go camping. ‘Qué más quieres?’ What else do you want? He had several businesses and lots of property, and his idea of success was having his family together, not fighting.”

4. “This is me, the translator, because I can’t speak Spanish but I identify heavily with my Latin roots. I am super proud of who I am, but at the same time, sometimes I feel like I’m overreaching and trying to be something that I’m not.”

5. “The elephant is pushing down on this ball that says ‘Justice for All.’ There is just this pressure that if we don’t address the elephant in the room, this is going to explode.”

6. “This is like a real traditional José Guadalupe Posada kind of figure. Posada was a political printmaker from Mexico City, and the figure’s reading a newspaper of all the stuff that’s
happening in America.”

7. “In Corpus Christi, there are refineries everywhere. I worked in a refinery for a little while. It’s really good money, but it was the worst. I made a decision early on that I was going to do art because I love doing it. It goes back to what my grandfather told me—that I can literally do anything if I work hard at it and go for it.”

Get a front row seat to the best shows, arts, and things to do across North Texas. Never miss a beat.
Ben Munoz Goldmark Cultural Center Paper Arts

Preston Pannek and Adrienne Creasey set out to add 10 free murals to Deep Ellum's walls. Here's the story behind their video game and cartoon-inspired artwork.
By Shannon Swain
Arts District