The narrow building that houses Môt Hai Ba is not far from Lowest Greenville but is seemingly located in another city, another country, another world. At the end of a residential street, it has the feeling of being hidden down an alleyway or maybe accessible only through a wardrobe. It takes you out of Dallas like no other place in town.

Yet it also is very much a neighborhood restaurant, with all the comfort that implies. Park on a nearby street, walk in and drape your coat over the rail by the door, and make your way to a communal table, where you will sit on a low, cushioned stool and spend the evening elbow-to-elbow with others, eating the most bewitching Vietnamese food in Dallas. There is intimacy even in the staff’s smallest gesture of leaning in. 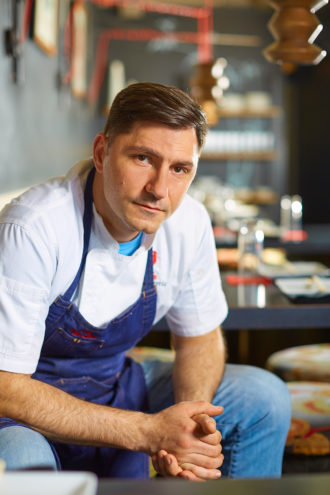 All of that was present when the restaurant replaced York Street in 2013. Peja Krstic started in the kitchen in 2015 and bought the restaurant from original owners Jeana Johnson and Colleen O’Hare a year later. He introduced and then eliminated brunch, with its pandan leaf biscuits and coconut jam butter, and did away with lunch—all in the name of focusing on the dinner service’s marriage of modern Vietnamese food and refined French technique. The result is layered and riveting, respectfully taking inspiration and delivering something altogether new.

One of the first dishes that mesmerized me here was duck hearts. With impeccable char, they were served over a salad of torn herbs, carrot, and daikon, with a nuoc mam dipping sauce that was pungent and tangy. Also, banh xeo chay/tom, the kitchen’s take on the lacy-edged crêpe served with a plate full of Vietnamese herbs. These are from Krstic’s early days of powerful, straightforward interpretations of Vietnamese street food, much of it hailing from the northern part of the country.

But more recently, Krstic has found his voice in charcoal-grilled oysters and charcuterie, in an integrated Gallic thread that’s turning things magnetic.

A collard wrap looks like a garden. A loose bundle of baby collard leaves holds soft slices of fresh rice noodle; cucumber; and the bright, tropical sweetness of pineapple. On top rests a black truffle petal that adds depth and musty richness. In this variant on a spring roll, the condiment is a lush pool of brown butter nuoc cham sauce.

The other starter that evening was a rectangle of head cheese, the meat from Chubby Dog Farm, made into a terrine with pickled hedgehog mushrooms and nubs of leeks. It’s wonderful, especially dragged through kimchee brown butter sauce that’s smooth as velvet. Krstic grew up making pasta and terrines in aspic with his Serbian grandfather, and maybe that’s why his charcuterie sings, aided and abetted now by sous chefs Brandon Whitehead and Ben Leith, who learned charcuterie at FT33.

To the side of the plate is a lovely composition: a mound of paper-thin pickled apple slices with a patch of dainty, edible flowers on top and spiced apple butter beneath. It’s arresting. But so many things are eye-catching now that Krstic’s plating has crystallized.

Reach for a bottle of Gamay from the all-French wine list that’s a beautiful fit with the food. Appreciate the New York intimacy that makes ex-Brooklyners weep into their pho. 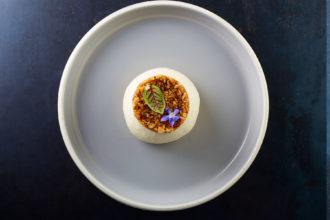 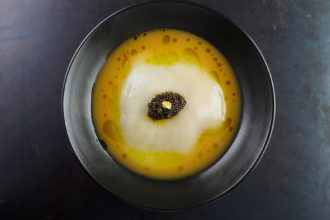 Speaking in a slightly different language, Krstic’s voice has never been clearer. He’ll surprise you with a pebbly, fried-shallot streusel the texture and color of rough sand, and a layer of caramelized onion purée on top of a steamed bao. He’ll grate foie gras au torchon over a crackling mille-feuille, but you won’t discover it until meal’s end, when it marries with a pandan leaf crème anglaise.

I am still thinking about a steamed rice dumpling I ate there recently—a marvel, two sheets of pillowy, steamed rice-flour batter in a broad, black bowl. The texture was barely chewy. On top was a mound of caviar, which echoed the darkness of the plate and added a dash of brine, and atop that, edible gold leaf that reflected the subtle glimmer of a sauce that lapped all around like a moat, an intense but gossamer liquid. Immediately, I sensed coconut water, just enough to make the sauce whisper with sweetness and give it a texture like silk. Inside was a mound of caramel-braised Sakura pork.

On another night, lamb neck was a winter dish. The small, rich portion over a purée of kohlrabi and kefir lime had beautiful parcels of slivered kohlrabi folded over a grilled pineapple chutney that tasted confit. They were the perfect complement—sweet and sharp, with the subdued root vegetable. A ring of leek butter completed the plate.

There are a lot of butters. And they do extraordinary work. Some French in style, others closer to the drizzle of oil you might find in Japanese cuisine, giving sheen and flavor to the surface of a bowl of ramen. The duo of coconut milk and Vietnamese coriander oil electrified red snapper set over a charred ginger rice porridge (chao).

But treatments of vegetables are equally enticing. A smolder of purple and orange roasted fingerling carrots enlisted rich peanut and peppery nasturtium and left me unexpectedly speechless. Notes of raw carrot and ginger had all the freshness and vibrancy that Vietnamese food represents.

Not everything is perfect. A deboned whole sea bass’ sweet nuoc mam was overpowering; the sauce drenched the delicate, flaky flesh. Fried Gulf oysters in a curry batter were needlessly accented with a shrill lemongrass caramel. But generally, even a side bowl of garlic noodles is nuanced, playing not just with garlic, but also the earthy and umami tenor of soy and caramel. You could get lost in them. That’s how I feel about many of Krstic’s dishes.

For dessert, the panna cotta that achieves an alchemy with zingy raspberry sorbet and cookie crumble has been there as long as Krstic. The crackling mille-feuille with pandan leaf cream is technically more ambitious. But the theme remains: a few flavors and Krstic’s voice. There’s simply no room for pretension here.