Get off the red line at the Tyler/Vernon DART stop and you’ll find the newly repurposed Tyler Station a few steps from the tracks, standing out from the rest of its residential Elmwood neighborhood. What at first looks like one giant brick warehouse is actually a collection of entrepreneurs, craftsmen, artists, wellness professionals, political leaders, and community members all jammed into one collaborative space. The idea at its core is simple: serve the betterment of the community and, in the process, set a new standard for how to work.

The anchor for it all is at the front of the building in the co-working Wax Space. Inside you’ll also find Rose Garden ReMake, a thrift store that funds the reintegration of women into the community following incarceration, and a progressive Baptist Church that hosts vegan-friendly potlucks most Wednesday nights. You can even quench your thirst with a cold craft brew at Oak Cliff Brewing Company, which ferments its beers here and partners with local nonprofits. 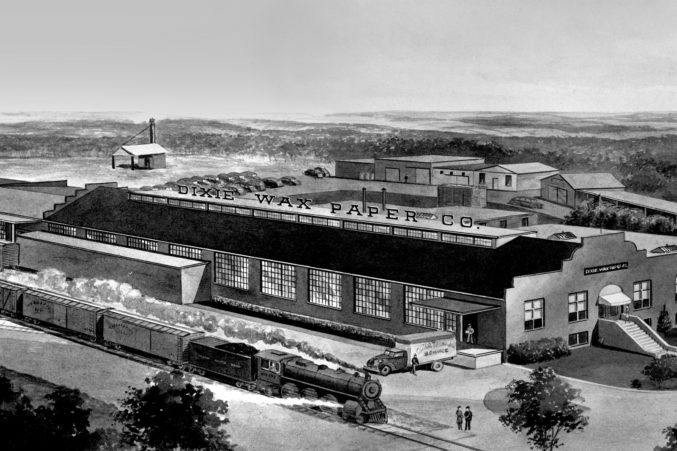 Pushing paper:
If you live in Kessler Park, you’re familiar with the dramatic English Tudor house with leaded-glass windows at 1414 W. Colorado Blvd. It was built by Louie Kimple, founder of the Dixie Wax Paper Company. Another tidbit: the company’s sandlot baseball team was referred to as the Paper Cup Lads and the Dixies.
courtesy Tyler Station

Unlike the majority of modern workspaces, where noise-canceling headphones are the norm, people at Tyler Station are encouraged to interact. Retail shops on the first floor have walls of grid wire, which allow passersby and occupants to see one another and say hi. They were made by Stash Design, Tyler Station’s first tenant, whose intricate custom work can be spotted around Dallas at places like The Wild Detectives and Davis Street Espresso.

The building was originally constructed in 1925 for the Dixie Wax Paper Company, which remained in the building until 1995, when operations ended. The building’s current incarnation is the brainchild of Monte Anderson, a local pioneer in sustainable South Dallas development. Anderson looked at the property for five years before he decided to take on the project in 2015. But rather than sticking with the previous owner’s plan to tear down the factory and build apartments, he wanted to find a way to repurpose it. “I imagined a manufacturing facility, a place to work out, offices,” Anderson says. “I never imagined 50 different companies in one space.”

The goal was to maintain the building’s history as much as possible. So aside from moving 200,000 pounds of metal off the roof, he didn’t change much. Businesses trickled in naturally by word of mouth, and now, after three years in the making, Tyler Station is 98 percent leased. The only thing it lacks is a traditional restaurant, but Anderson says that’s because the nearby Bishop Arts District is already overflowing with places to eat. “We wanted to be an addition to the community, not in competition with it,” he says.

The best time to experience Tyler Station is during its monthly First Thursday event. The tradition started in February when Andre Anziani, husband to Heather Harbord—the founder of on-site cakery Crumb & Kettle—thought of the idea. He based it off the art walks he grew up attending in San Antonio. You can browse the shops, dine at food trucks, and enjoy live music. The only downside is limited parking. So just take DART.