That block is not unique. The one where the older, humble Craftsman homes have been torn down and replaced with rectangular boxes painted like asphalt and stacked atop one another. They clash with their neighbors—until more of them are built, making all the holdouts look like the weirdos.

That block is in West Dallas. It’s in North Dallas. You can find it in Old Lake Highlands and over by Love Field. The designs might not always be so ultramodern, but they are definitely new. This is what happens in cities: property values of houses closer to the city core shoot up. Longtime residents buckle under the increasing property taxes, and they sell. What was old becomes something else. Sometimes a developer will build condos or townhomes if zoning allows it, often combining adjacent lots. Drive down Wycliff Avenue, near Harry Hines, and you’ll see just that. Or take a tour of Old East Dallas, below Fitzhugh. In other cases, developers can turn a profit on a new build of a single-family residence on a small lot.

“It’s actually a very natural phenomenon,” says Jim Gaines, chief economist for Texas A&M’s Real Estate Center, which researches the state’s housing markets. “The people who live there want the efficiency and the benefits of having a new house, but they want the location. The key is the location. That will dictate what happens in that neighborhood.”

Since 2012, there have been 6,530 demolition permits issued by the city of Dallas for single-family homes or duplexes, according to data provided by the Building Inspection Department and published here for the first time. More than half of those, 3,562, are located in council districts 2, 6, 11, and 13, an area that includes downtown and shoots north like a hook that hangs over the Park Cities.

“If you go from downtown Dallas in a radius outward, you have a lot of stock built in the 1920s, the ’30s, the ’40s, and the functionality of the homes built 70 years ago or more can be limited,” says Al Meyer, a real estate agent with RE/MAX DFW Associates who has worked in Dallas for nearly four decades. “If you’re in a historic conservation area or district, you are going to try to renovate those properties and maintain that original character and charm, but a lot of properties don’t have that.” 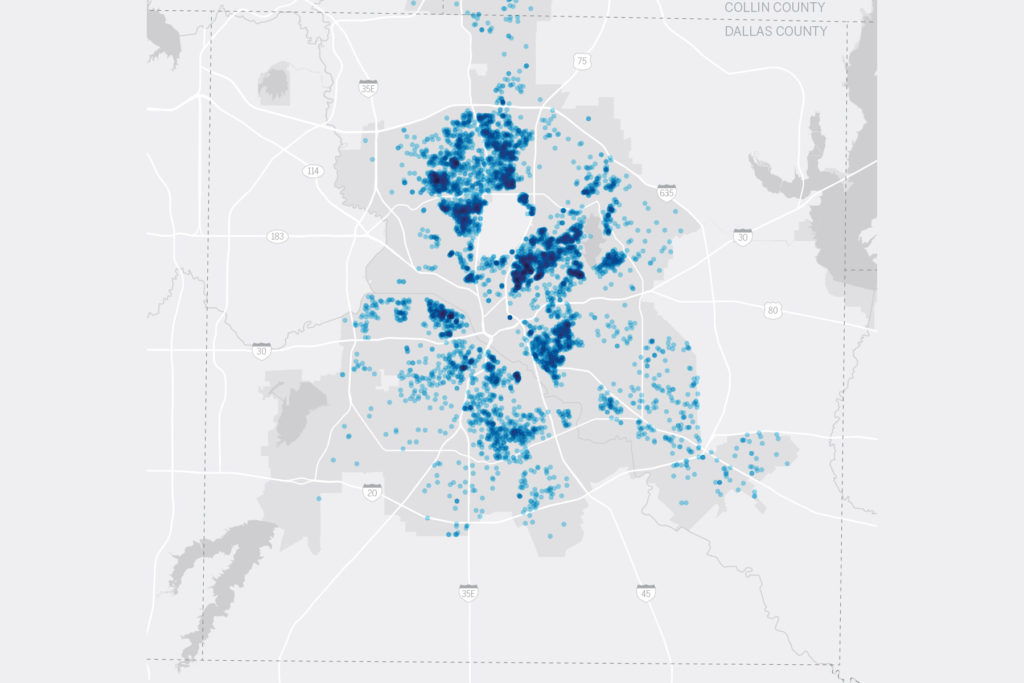 Dallas teardowns: People want to live near the urban core, but they want the benefits of new builds. That means replacing aging housing stock with, more often than not, a modern transitional farmhouse. This map shows the 3,562 demolition permits issued by the city since 2012.

There are only 20 conservation districts in Dallas, all but three of which are clustered in Oak Cliff and East Dallas. Two are in Oak Lawn and one is in North Dallas. Those are the neighborhoods where homeowners agreed to be hogtied by the city; setbacks, structural heights, design, and density can all be codified. There are also 21 historical districts, which are even more strict, aiming to preserve original structures exactly as they were first built. Most neighborhoods don’t have that protection. And, to be fair, most neighborhoods don’t have the collection of Craftsman and Tudor homes of Hollywood/Santa Monica.

But there is architecture and history all over Dallas that is worth protecting. As noted by David Preziosi, executive director of the nonprofit Preservation Dallas, most of the conservation districts protect homes built in the early 1900s through the 1940s. Neighborhoods with homes built in the 1950s and 1960s are largely left alone. Preziosi says Preservation Dallas was working with the Midway Hills neighborhood—you probably know it as the Disney Streets—to help them set up a conservation district with the city, but there wasn’t enough neighborhood support.

“I think it’s important for neighborhoods to understand what they have and the character that they have,” Preziosi says. “Once it’s gone, it’s gone.”

A fast way to tell if a block faces the teardown trend in the next few years is to type a few addresses into the Dallas Central Appraisal District’s website. Is the land hovering around $275,000 and the house itself worth just a fraction of that? Bingo. Those numbers point toward a bulldozer. And, frankly, the houses can be in pretty poor shape. The bad news about this trend is that the city is facing an affordable housing crisis, and when older homes or duplexes get replaced with something newer and more expensive, that usually means the stock of houses that lower-middle-income folks can afford dwindles. It pushes these people out farther to the edges. The city has tried to address this in its housing policy, including mechanisms that freeze property taxes for longtime residents near booming areas (like Oak Cliff, near the forthcoming deck park) and instituting a grant program to help older and poorer homeowners get money to fix up their houses.

But it’s their right to sell their homes. And it’s the buyers’ right to tear them down and build what they want, so long as the new houses conform to code. And if the neighborhood isn’t organized to fight it, well, tough luck.

Dealey Campbell has lived in Old Lake Highlands for a decade. She resides on a pie-shaped lot in a ranch home, a style that’s popular there. There have been 298 demolition permits issued in her Council District 9 since 2012. Of those, 209 have been issued since 2017. It’s happening quickly.

“You see these tiny little houses in the shadow of two-, three-story houses?” Campbell asks. “It is changing the character of the neighborhood.”

Meyer, the real estate agent, says he expects the bulldozers to move toward Fair Park and points south. The land is cheap, and the location is good.