Meet the Sunflowerman, an Influencer With an Old Soul 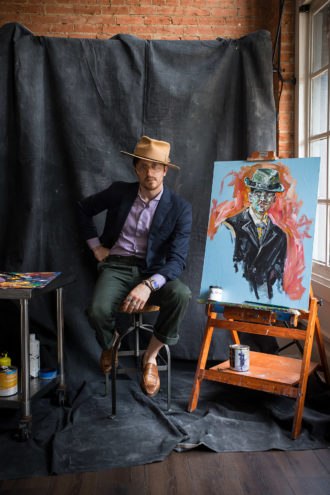 When Matthew Miller first arrived in his wife’s hometown of Fort Worth after spending a few years abroad, the fashion illustrator was not impressed with the local men’s fashion scene. “Men here are still that more traditional man,” he says. “They don’t want to go shopping or think about clothes.”

After moving to Atlanta, Miller stumbled into that city’s fashion community and met his wife Ruth Meharg. He began painting his friends wearing suits and posting the images to his Instagram account (@sunflowerman). Then his phone started ringing.

“Somebody from London reached out to me because they saw it, and they said, ‘I’m starting a boutonniere business. I’d love for you to do some illustrations for me.’ And I thought, ‘Oh, gosh, that’s amazing,’ ” he says. “That was my first real taste of professional illustration work.” Today, Miller travels the world partnering with local and international brands to create illustrations, time-lapse videos, social media content, live event paintings, and more.

“Men here are still that more traditional man. They don’t want to go shopping or think about clothes.”

Though he doesn’t consider himself to be an influencer, Miller does believe that the marriage of old and new can help shape how men dress today. “People still love nostalgia,” he says. “I think that’s what people were inspired by initially—that somebody was doing illustration again, this thing that was dead but beloved and is back.”

When I met Miller in Fort Worth’s trendy Sons of Liberty coffee shop, he was sporting a Panama hat, floral button-down, and leather jacket. But he’s not hoping for imitators. He wants North Texas men to develop their own styles, whether they are true cowboys or New York and L.A. transplants.

Sketchy characters: Miller’s clients have included menswear designers Luciano Barbera and Brunello Cucinelli, watch brands such as Fossil and Longines, car companies, Macallan scotch, and a Las Vegas hotel. You can also hire him to paint your portrait, starting at $1,000 for a 9-by-12 version.


Part of the challenge, he says, is that though North Texas has a long history of developing homegrown retailers—think Neiman Marcus and Forty Five Ten—we don’t have a large maker community for men’s fashion. Dickies, a brand he often works with, is a rare example of a men’s clothing manufacturer that is based here and has continued to evolve over nearly a century.

“I’ve talked to so many guys who love fashion,” Miller says. “They want to know what they can do differently but don’t know how to get there. This could really shape the direction. Even if it’s just thinking more consciously about what you’re buying—even if it’s just that t-shirt.”

Our annual list of the men and women who are always beautifully put together.
By Stephanie Quadri
Fashion

From a stylist with his own hashtag to a karaoke-singing supervillain, we present our annual list of 10 people who make Dallas their runway.
By Liz Johnstone
Fashion

Pair a floaty frock with pretty underpinnings, delicate jewelry, and a barely there lip, and you’re good to go.
By D Magazine
D Magazine Directories